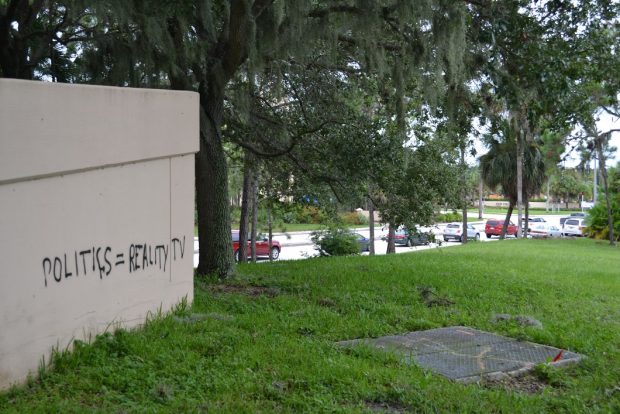 Vandalism, street art or just plain ol’ graffiti: yet another instance of amateur artwork has found itself on campus property. While Hurricane Hermine left campus covered in debris, fallen trees and flooded dorm rooms, an anonymous individual managed to make one more contribution.

The graffiti, which was discovered on Sept. 2, included a mysterious mix of symbols, including an arrow and a heart, and the words “evil eye best man”, visible to anyone walking behind the Third Court Pei Residence Hall, and “politics=reality TV” located on the overpass and visible to anyone in the parking lot in front of Sudakoff. As of right now, both remain on campus, clearly visible to the student body.

This is not the first instance of graffiti on campus. On Oct. 25, 2015, “Art boner” was spray painted under the New College insignia heading North on 41. Following that, mere days after “Art boner” had been cleaned, a newly spray painted “Naw College” appeared on the overpass, visible to students but not to oncoming traffic nearby.

Several months later, on Feb. 1, 2016, another design, what appeared to be a ghost with the words “Vol. 2” next to it, was spray painted onto one of the walls of the Gold residence.

There have been other instances of damage to the campus, including punched holes, fecal matter left in Hamilton “Ham” Center and arson on campus. Damage to community spaces has previously resulted in a fine to the entire building that all residents are expected to pay.