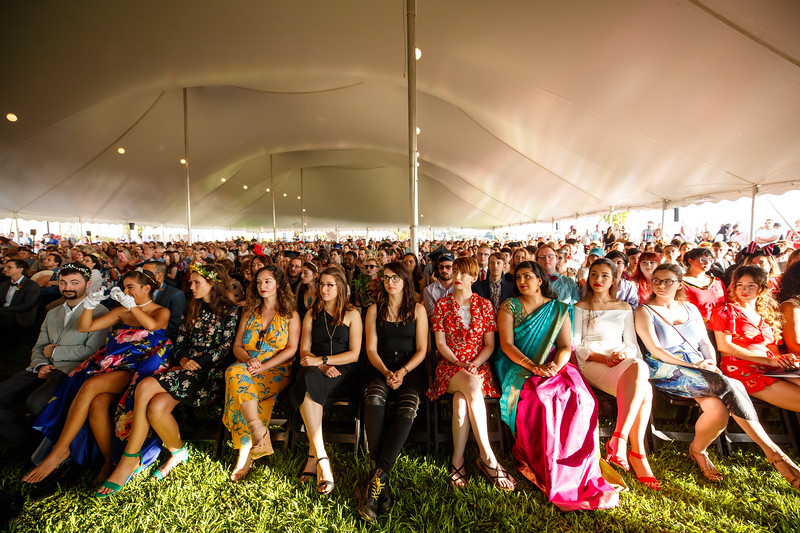 photo courtesy of New College of Florida The 2018 commencement ceremony.

In November, it looked as if students were tasked with the choice of funding the Graduation Palm Court Party (PCP) or food at this year’s commencement ceremony. However, according to Vice President of Relations and Financial Affairs (VPRFA) Eva Ernst, the issue has been resolved. “They’re both going to happen,” Ernst said.

The issues the New College Student Alliance (NCSA) budget has been facing stemmed from unexpected low enrollment this academic year. As previously reported by the Catalyst, this year’s class size of 222 students was the lowest in eight years. Enrollment is directly related to the NCSA budget, as 7.4 percent of students’ tuition per credit hour, for Florida residents, goes to the Activity and Service (A&S) fee, which helps fund the NCSA budget. With less students enrolled, there is less tuition being paid, and therefore less A&S fees being collected. In addition, the college recently started charging the student government with a Contra fee, which essentially accounts for the money the school loses when it waives tuition. The NCSA will have to pay the Contra fee, in addition to the Administrative Overhead fee, with the reserve funds, which are already depleted at $62,000. According to Ernst, the reserves are never supposed to dip under $100,000 but the current administration inherited an already depleted reserve fund from the previous administration.

According to Ernst, the budget the current administration inherited was $249,490.19, but the actual amount of money was closer to $170,000. Due to these budget strains, with less funding and more fees, Ernst began instating caps on the budget at the beginning of the school year and was able to bring the budget down to $178,057.84.

One of these budget restrictions was the $9,000 allotted for food at commencement. Ernst thought there may be a way the NCSA would not have to pay that anymore. However, when she brought it up to Vice President for Finance and Administration John Martin, he suggested the NCSA cut Graduation PCP and put that money toward the $9,000 and the school would cover the rest. According to Ernst, Martin assumed few students actually attended Graduation PCP. Ernst, who felt cancelling the end-of-the-year party would be a bad decision, sent out a poll to students in November in hopes that she could show Martin and President Donal O’Shea how students felt. One question in the poll asked students if they had attended a Graduation PCP. Out of 118 students who answered the question, 78 percent indicated yes. A second question asked students if they had attended a graduation ceremony at New College before. Out of 118 responses, 72.9 percent indicated yes.

After sending out the poll, Ernst met with O’Shea to discuss the issue. According to Ernst, O’Shea “mentioned that he does want Graduation PCP to happen, and he doesn’t want the food to be at the cost of PCP.”

When asked in an email interview what his response was when Ernst approached him about the funding issue, O’Shea wrote, “I thought this was a Hobbesian choice and there had to be another way of resolving the funding dilemma.”

When asked if he agreed with Ernst’s comment that he wanted Graduation PCP to happen, and did not want food to be at the expense of the PCP, O’Shea responded that food after the ceremony is important to graduates and their families and other students. He noted that some graduates go out with family after commencement and others “hang around for one last night on campus before leaving.”

“All this said, I think that student fees should be used in a way that benefits the maximum number of students, so if I had to choose between the events, I would go with the food after graduation (because virtually every student who attends graduation uses it) over the COUP (which serves a relatively small subset of the students who attend graduation),” O’Shea said.

According to Ernst, O’Shea “absolutely was very clear that he wanted it to happen” in their meeting before winter break. With administrative support, the only roadblock was finding a solution. Ernst had been brainstorming alternatives to providing food at graduation, such as a voucher system for a local restaurant. However, when Ernst introduced the voucher idea to Martin’s office on Wednesday, Feb. 6, she was told the issue was no longer the NCSA’s responsibility.

“John mentioned that he still wants to have food [at commencement] but told me not to worry about it and that he would figure out how to get the funding from within the college’s budget, probably through the same budget that he was telling me about with the [Sarasota Classic] Car Museum rent and the vending machine funding,” Ernst said. “So he told me that the NCSA doesn’t have to worry about paying for food at graduation, but there will be some food there, probably less than usual.”

The funding Martin is referring to is the money New College collects from rent on the Classic Car Museum and the vending machines around campus. In this case, they could use that money to pay for the food.

With the food funding taken care of, the budget’s allotment for Graduation PCP remains intact. However, with conflicting interviews from Ernst and O’Shea, it is unclear how much administrative support there actually is for Graduation PCP, or PCPs in general.“I think that is up to students,” O’Shea said, when asked if he were a proponent of Graduation PCP happening as usual. “I believe that students should look at the Graduation COUP and determine if it is the best use of student fees to allow graduates and other students to share some time together on their last day on campus. Actually, the same comment applies to other COUPs—many students dislike them—they’re expensive and an increasing proportion of students have been electing not to attend.”