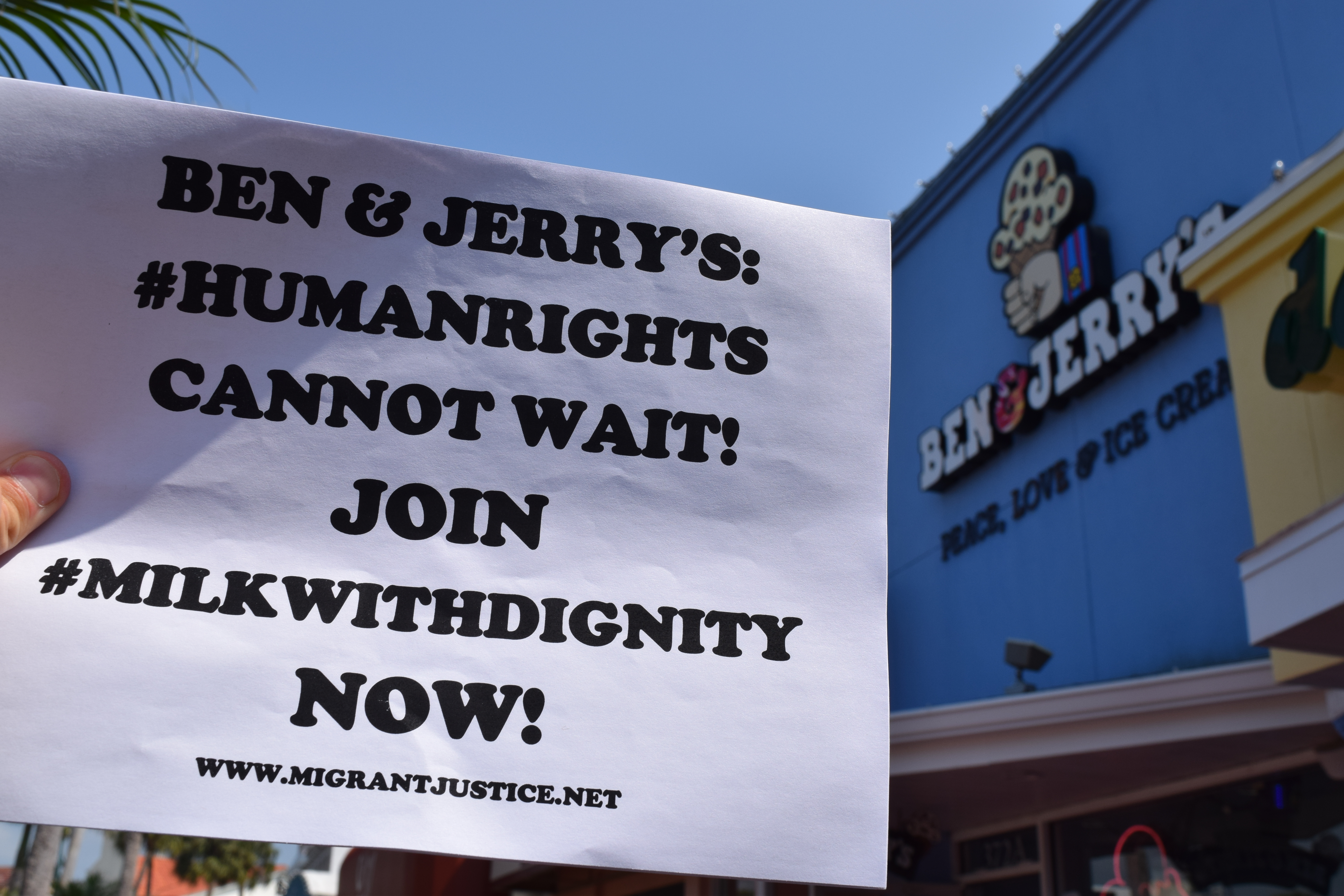 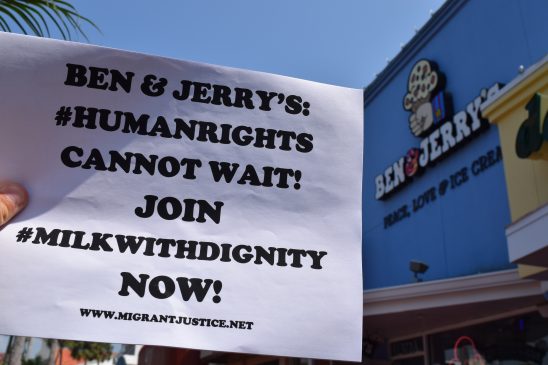 While hundreds made the trip to the local Ben & Jerry’s to snatch a free ice cream cone on April 4, a group of students ride-shared to the St. Armand’s Circle location for a different purpose: to spread awareness of Ben & Jerry’s lack of commitment in joining the Milk with Dignity Program (MDP).

The MDP was modeled off of the Coalition of Immokalee Worker’s (CIW) campaign for Fair Food after a farmworker survey revealed the challenges migrant dairy farmers face. It similarly calls on food corporations to take responsibility for any worker mistreatment or abuse that occurs in their supply chains.

The MDP is composed of five essential elements: (1) to ensure a farmworker-authored Code of Conduct (CoC), (2) to provide education of the rights promised by the CoC, (3) to create a third-party monitoring body that enforces compliance with the CoC and handles worker complaints and reported violations, (4) to require corporations to pay an extra premium to farmers and farmworkers and (5) to require participating corporations be bound to these agreements under the law.

In 2014, members of Migrant Justice – a human rights and food justice organization based in Vermont – conducted a survey of 10 percent of Vermont’s dairy farm workers and found that 40 percent of farm workers receive less than the state minimum wage, 29 percent regularly work seven or more hours without a break to eat, while 26 percent never receive their pay stubs.

Ben & Jerry’s sources most of its cream from St. Albans Cooperative farms, where many of Vermont’s approximately 1500 dairy farm workers are employed. This prompted the members of Migrant Justice and allies to call on Ben & Jerry’s, a company with a distinct and longstanding commitment to social justice, to join the MDP. One year later they publicly committed to adopt the program in their Northeast supply chain.

“Ben & Jerry’s is proud of its longstanding relationship with the family farms within its Vermont supply chain,” the company said in a statement in June of 2015. “The member family farms of the St. Albans Cooperative Creamery share the vision and values and work every day to deliver a dignified life for everyone working in the Vermont dairy industry. Our united vision is to ensure that everyone within Ben & Jerry’s Vermont dairy supply chain work under fair, just and dignified conditions.”

But now in 2017, two years have gone by and Ben & Jerry’s has still not implemented the program, prompting the April 4 action to flood Ben & Jerry’s stores across the country to educate and spread awareness to consumers of their lack of initiative.

“We signed an agreement to work with Migrant Justice to implement the Milk with Dignity program within our supply chain,” Ben & Jerry’s said in a statement on March 30. “It was a year later when we received the first draft of the program from Migrant Justice. We’ve been working diligently with them since then on the details of how to successfully operationalize the program, which still needs finalizing. We strongly support the goals of Milk with Dignity and believe that a worker led program is the best way to protect the rights and dignity of the workers on Vermont’s dairy farms. We remain committed to the agreement we signed and are continuing to work towards a successful conclusion with Migrant Justice.”

Rick, the owner of the local St. Armand’s Ben & Jerry’s, met students outside and urged them that if they needed anything to just let him know. Student’s delivered letters and signed statements of support from customers to Rick, who promised to pass the message up to his higher-ups.

Second-year Kayla Kisseadoo appreciates Ben & Jerry’s efforts towards a future that protects and ensures justice for dairy farm workers, but believes it is important to continue the fight and sustain the pressure.

“Until our migrant families are working in clean and safe environments, until they are paid fairly and on time and until they are no longer abused, we shall not rest,” she said. “This is a positive step, but we need to see commitment!”

To learn more about Migrant Justice or to get involved with their initiatives, visit migrantjustice.net.

Information for this article was gathered from migrantjustice.net, thinkprogress.org, benjerry.com and coworker.org.