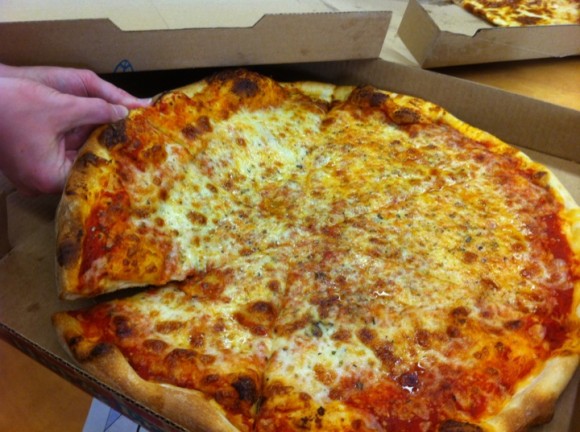 I’m not an expert on much. I’m no pentamath — in fact, I can hardly remember what that word even means. But there’s one thing I’ve studied with more passion, careful consideration and boundless perseverance than anything else: I love eating pizza. I love the hell out of it.

So when I found out the Catalyst had some capital to burn thanks to our advertising sugar mommies and daddies at the QRC and the WRC, I suggested we spend it by conclusively ranking of some local ‘za producers. The staff concurred that such a test would probably be beneficial in journalism’s truest cause: the greater good. That is to say, it would be good for us to spend our Friday class on April 1 chowing down instead of counting the typos in the last issue. On the Catalyst’s dime, that’s an even greater good.

We tested 4 large cheese pizzas. No offense meant to those of the vegan persuasion, but I can’t imagine a better gold standard than the basic cheese. It’s no coincidence that in 1979’s Rock ‘n’ Roll High School Joey Ramone was said to subside solely on a diet of cheese pizza. This is the manna of the gods — or at least the stuff that keeps our country fat and happy when we’re too lazy to cook.

But what’s more: according to Jane Black of New York magazine, the USDA declared in Feburary that “pizza is evil,” and a dangerously “effective cheese-delivery system.” If there’s a war on pizza being raged, my staff and I unflinchingly put our lives on the line for the cause, pumping our bodies full of saturated fats and sodium for the sake of keeping you, the reader, informed. No need to thank us. But we could use a napkin, if you don’t mind … and some red pepper flakes while you’re at it.

Below are the results from our study ranked in order of proximity to campus, from the closest to the farthest away:

First things first: the pizza itself was all right. They gave me a pie with light sauce even though I didn’t order it with that specification. Also, the receipt identifying the pizza indicated it had been ordered by “Steven.” When I pointed out my name was Graham, they said I could take it or wait for them to make another one. I took it and dipped, not bothering to discuss the fact that an employee said my bill would be around $20 over the phone. The final tab was much lower.

Gracelena Ignacio picked this as her favorite, and I value her opinion because she seems to have a good head on her shoulders — she works in the library and all. There was a time in my life where I too would lean in favor of a crispy crust such as this. But, as Paul Zombory pointed out, “Crispy is not always good.” Perhaps a pie with a full dose of sauce would have pleased me more, but that order must have wound up at some Catalyst meeting in bizarro-Sarasota. We will never know.

That this dealer may be exploiting the basic human need for pizza is a troubling possibility. On the other hand, Rico’s is definitely within walking distance of campus (it’s a half-mile south on Tamiami) and has especially cheap Genesee Draught after 8:00 p.m. All things considered, there’s something to be said for taking a chance on this pizzeria of ill repute.

When I went to the Hungry Howie’s on Tamiami Trail, the pizza wasn’t ready. In fact, I have more than a reasonable hunch that my take-out order drifted off in to some kind of alternate universe, where every take-out ever ordered and than immediately forgotten about by an employee goes to die. Such was the reaction I got when I went to pick up the pie and got only three pairs of dumbfounded, dear-in-the-headlights-looking employees mumbling something about it coming right up any second now. I came back a few minutes, and was told there had been no progress. I told them to forget about the order — I was late enough for class as it was.

Not like I even need to be reminded of how Hungry Howie’s goes down. This has been my dirt-cheap-pizza noms since Zachary and Anthony Dewar opened my eyes to the yellow-checkered box my first year at New College. Not only is it a Sarasota staple, Hungry Howie’s is more-or-less directly sponsored by the student government. They dispense the foodstuff at Towne Meetings with some regularity.

Who hasn’t had Hungry Howie’s pizza? And for that matter, who can’t imagine the occasional order being misplaced when you’re talking about buying a pie for under six bucks? If you’re cash strapped, hungry and on campus (it’s just south on Tamiami right before the Goodwill, as if you didn’t know) you can’t beat Howie.

This was a new place to me as of two weeks ago, and given it’s location about three miles east of campus on University, I might have gone longer without sampling its wares if it wasn’t for a strong personal recommendation. I’d tried their specialty pizza before, and it was definitely a good buy. But the cheese, the gold standard, how did it rank?

Filippo’s got the most votes for best pie of all the slices sampled, a total of three. I, as an informed conductor of the study, also would say this was the best of the bunch. I can’t say whether it was the sweet sauce or the tasty crust (never to be underestimated on a real pizza-eater’s pie) but if I have to count on a place to deliver the real thing next time I need it, I’ll head to Filippo’s if I have a little time and a little extra cash. This would definitely be the place for when my folks are in town and looking to throw down on a decent nosh.

Though it’s not a traditional pizzeria (which for one subject automatically relegated it to a lower level of competition for the purposes of this comparison) many students shop at Whole Foods regularly and swear by this crusty classic, with or without vegan cheese. Bonus points were awarded for the grocer’s assembly-line production cycle, meaning pies come out regularly in addition to specific customer orders, as well as the cheap Polish beer available at this one stop shop. Mmm, Zywiec! Palce lizać!

Two staff writers pegged this as their favorite. According to Paul Zombory it all came down to one factor: “The cheese,” he said. “Because of the cheese.” I hear you. Yes, the cheese was good, and if you pick it up in the store you can usually plunk down some free samples of high-end fromage as a bonus topping.

But wither tasty tomato sauce? I would have preferred a pie with a little more juice. I personally gave this pie a marginal sat, but feel that it’s important to account for all available quantitative data. Thus, Whole Foods earns a slightly higher mark.

Corey Rodda was the only staffer who said this pizza was their favorite. But it must be considered that she recommended we get a sample of this pizzeria’s ‘za for the taste-test in the first place. She said in an e-mail that she “grew up on this pizza,” and as she’s a transplant from New York state I put a lot of stock in her opinion. Importantly, this was a single-blind test — Corey did not know the pizza she picked as her number one choice was from Casa di Pizza until after the votes were tallied. Which gets to the real question: how does this Novocollegiate-nurturing pie stack up?

It wasn’t bad. I’ll give it this much: it had a tender bottom crust, a good consistency for holding back a flood-like volume of hot sauce. Nice and gummy. The sauce was solid, not adventurous (I suspected a hint of sugar, a key ingredient in Siciliano’s legendary pie) and appropriate in proportion to the cheese.

The biggest problem is with the store’s location: across from the Super Target in Lakewood Ranch near I-75, out of those reviewed this pizzeria was the furthest from campus. Granted, Google maps pegs the journey at taking only 16 minutes by car. But when you’re craving a slice, aren’t those seconds a little too precious to be wasted on the road? Plus, I’m not going pretend to love navigating the parking lot catacomb known as Lakewood Ranch unless I have to — uff da. But if I was in the area in need of some cheese, I’d hit it up. As for Corey’s opinion, I bet she’s got this sauce in her

DNA by now. She could probably pick it out of a lineup of some 300 different pies. But she wasn’t too far off the mark.