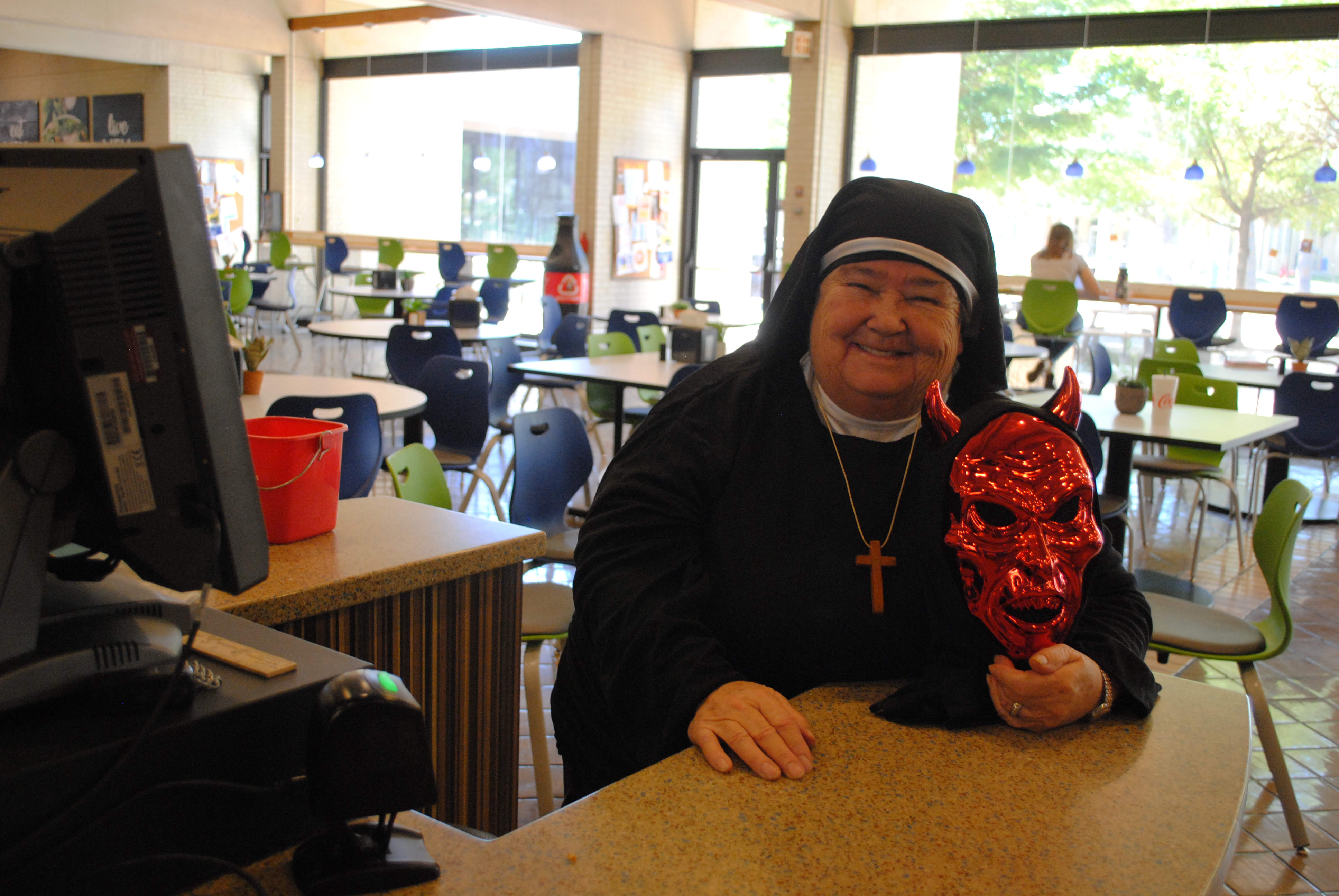 Metz Culinary Management (Metz) employees. Students see them everyday for breakfast, lunch and dinner, receive advice from them about their school lives and exchange pleasantries like it is nobody’s business. Yet, even with all the time spent together, many Metz employees have still retained their mystique. What is the story behind the name badge?

General Manager of Metz, Bill Moore, was born in Pittsburg, Pa. Moore has managed Metz for five years. Moore is a musician and has played the organ, piano and violin since he was six years old. He plays the organ at an Episcopal Church in Sarasota and his husband, Kevin O’Connor, sings alongside him in the choir. Moore would like to retire from Metz after the new Cohort of 2019 graduates.

Moore met O’Connor at a gay bar some 21 years ago. They went out to breakfast the morning after, where Moore spoke frankly about his future with his new man.

“I told Kevin, ‘I don’t know what I want or where I want to be,’ Moore recalled. “It just seemed like after that we were together constantly and ever since then we’ve lived together.”

The couple got married three years ago on O’Connor’s 91-year old mother’s birthday.

“Kevin and I cruise all the time,” Moore said. “We’ve cruised over to Europe, Greece, Italy, the tip of Africa. We were on a 22-day cruise on a ship.”

The couple has been to Scotland, England and plan to visit Ireland next year.

Kevin O’Connor was born in Pittsburg, Pa. He went to school at the University of Tampa.

“Pay no attention to Facebook, it shows that I just started at the University of Tampa, it’s not true,” O’Connor laughed. “I just updated my profile and that’s what it said. Yes, after I leave New College I rush across Tampa Bay at 10 o’clock at night to take the only class they offer: sleep deprivation.”

He has two older siblings. His sister lives in Florida and his brother lives in Pennsylvania. Over the years he and Bill Moore, his husband, have had nine foster children. Michael Guernsey, also an employee at Metz, is their foster child. The family has three dogs: a chocolate lab, a boxer pointer and a golden retriever.

“I really enjoy the young people here, they give me a lot of hope, actually,” O’Connor said. “Sometimes the adults of the world think that the young people are very entitled and they don’t really care, but that’s not true. I would say without a doubt that this is a very passionate group of students, they are very polite, except for the darn phones. Keep your phones away when you’re visiting the sub shop.”

O’Connor remarked that he has a great relationship with the students on campus. He feels that he is “the cool uncle,” and tries to attend some of the student-led events on campus. He attends events at the Black Box Theatre, Dance Collective and graduation, among others.

“If you don’t come to the sub shop, I probably don’t know you,” O’Connor said. “But if you’d like to [get to know me], come in and say hi. I make my best effort to try and know the students.”

Michael Guernsey, originally from Pittsburg, Pa. has worked at Metz for five years.

“I couldn’t wait to get out of the north because I’m not a big fan of the cold,” Guernsey said. “I didn’t like shoveling snow. I want to live where it doesn’t snow, so I guess I live in the right place.”

Guernsey wore his World Wrestling Entertainment (WWE) pro-wrestling shirt for Halloween. It read “Get These Hands,” which is a catchphrase for 6’8’’, 386 pound WWE wrestler Braun Strowman.

Guernsey likes to watch wrestling, but does not practice it himself.

“I leave it to the professionals,” Guernsey said.

Guernsey is a big sports fan, particularly into football and hockey. He is a loyal fan to his Pittsburg teams: the Steelers and Penguins.

While Guernsey is at work at Metz, he usually controls the aux cord, setting the tone for cafeteria interactions. And although his name tag reads “Mike,” he prefers “Michael.”

Joanne Corsi is from Sarasota. She lived in Sarasota for 35 years and moved to Chicago for six years, then moved to Seattle for 15. In Seattle, she owned Bella Dolce, a “rustic Italian” bakery and cafe.

Red velvet cake seemed to be one of the cafe’s biggest hits. As one Yelp reviewer coined it, “Red Velvet Cake. Those are the only three words you need to know. Upon sinking your teeth into the moist, decadent cake, you will rethink your ideas on heaven.”

Corsi has worked at New College for more than three and a half years.

“I take my job seriously,” Corsi said. “I try to do my best for the salad bar, to feed the kids healthy things.”

“My grandparents came over through Ellis Island and landed in New York and Chicago,” Corsi said. “My parents moved to Longboat Key in 1955. Longboat Key was nothing but pine trees and raccoons and now it’s quite populated.”

Laura Testa, another staff member of Italian heritage, was born in the Bronx, New York City. She worked in food service for most of her life and started a construction-site cleaning business in New Mexico, where she lived for 24 years.

Testa was dressed as Mother Superior, with a devil’s mask as her companion as she ran the cash register on Halloween.

“It’s a family joke,” Testa said. “I did 18 years in Catholic school. I had a lot of friends that were nuns. I would have the nuns over for dinner, I’d go out drinking with them, I knew all kinds of nuns and I still make fun of them.”

Testa has worked at Metz for six years.

“I’ve actually seen two classes graduate,” Testa remarked. “It’s kind of hard to see them go. Every now and then I’m looking for someone and they’re not here anymore. I watch them come in and they’re like little kids. They leave, they’re mature and much more balanced. You know, they’re older.”

Mindy Graswald, born in Huntington, W. Va., moved to Sarasota as a child. She has four children and eight grandkids.

“It’s a joy, it’s fun. They do crazy stuff,” Graswald smiled. “It keeps me on my feet, it keeps me vibrant. I love [being a grandmother], I wouldn’t change it for anything in the world.”

Her children and grandchildren live in Sarasota and she sees them often.

Graswald often gives New College students the advice to take time out for themselves, while they study. She says that helps things to not be so stressful.

“I like the students, it’s good to see what their dreams are for their future,” Graswald said. “Sometimes I give them advice. I kind of feel like a little mother hen here.”