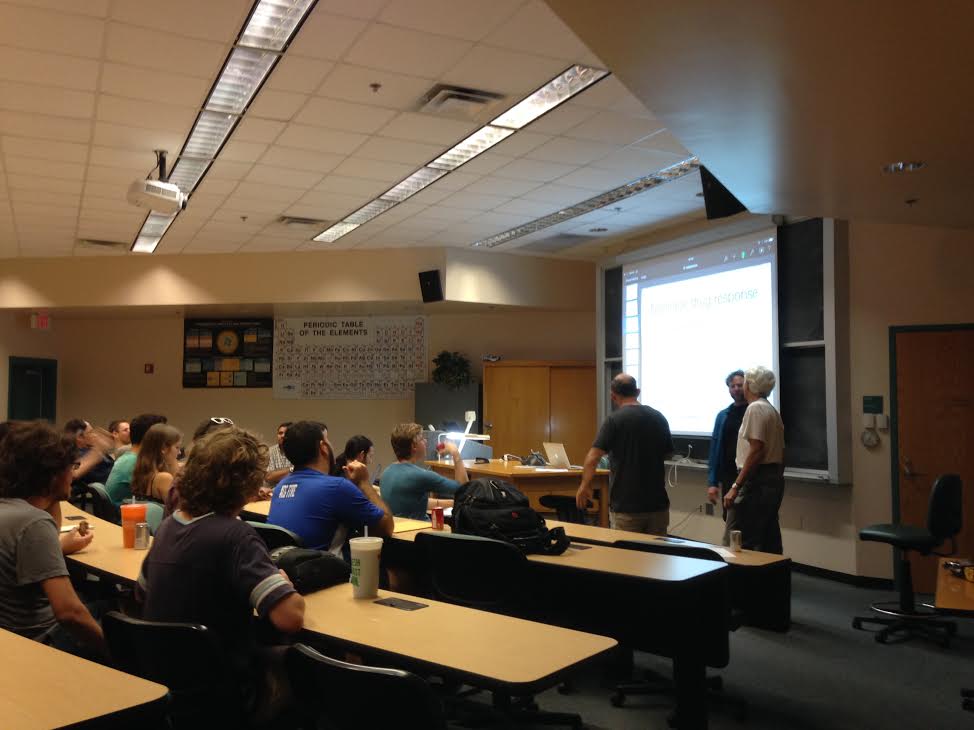 According to data from New College’s Office of Institutional Research, about 60 percent of graduates in recent years have been assigned female at birth** (AFAB), while the percentage of AFAB individuals who declared their areas of concentration in fields like philosophy, classics, medieval renaissance studies and music is has been lower than 25 percent.

“Philosophy is very gender imbalanced and that’s something we’re working on in the philosophy program here,” said Professor of Philosophy Aron Edidin. “Demographically, we’re right smack on national averages. For undergraduate population, the average is about sixty-percent female and forty-percent male, here and nationwide. About one-third of Bachelor’s degrees in philosophy go to women here and nationwide. We just reflect exactly the national patterns, but that’s sort of discouraging because you’d hope we’d do better, so we’re continuing to work on it.”

“There is no indication of a gender divide amongst students who are in their first philosophy course,” said alum and philosophy student Olivia Levinson (’15) in an e-mail interview with the Catalyst. “After taking two or three philosophy courses, a gendered chasm develops. This means that there is equal interest in Philosophy, but something about the field pushes women away.”

What is it about philosophy and other gender-imbalanced fields that keeps people of certain genders from pursuing or succeeding in these studies?

Another factor that might discourage non-cis males from continuing to pursue philosophy is a perception of hostile pressure within class discussions.

Sources show that trends of male-dominated philosophy are not unique to New College. On the popular blog Being A Woman In Philosophy, there is a word-cloud that highlights what phrases are used most often in posts on the site. The most common are “sexual harassment” and “failure to take women seriously”.

“One of the efforts to breakdown the schema mismatch is to present exemplars, so we got funding for a series of lectures by women in philosophy,” said Edidin. “The idea is just to increase the visibility of the work of female philosophers. We also working on increasing the representation of women in the authors of readings we do in class.”

In other humanities fields, like medieval renaissance and classical studies, gender disparities can be traced back to the origins of the subject matter.

“I think having a range of perspectives when approaching a text is really important, particularly for a field like medieval studies that has been dominated by male scholars,” said Deal. “For example, in a class I’m taking now there’s an ambiguous sexual assault scene. The way I and my female classmates felt about that scene is probably different than how some other members of the class felt about it. The way we talk about it is different.”

Gender imbalances tend to inform classroom experiences, even when students may not be conscious of it. “There’s a different feeling based on who is in the room,” said Deal. “The things I will say or point out about the readings are different based on who I’m comfortable having certain discussions with. I took a history class taught by a female professor that had no male students at all and it definitely felt different that other classes I’ve taken.”

“There is totally a gender disparity in my classics class,” said humanities thesis student Taylor Allyn. “It’s mostly men. It’s taught by a man. There’s not a lot of women writers, there’s not a lot of women characters. There’s so much misogyny – all the female characters are weak; women are always traded as prizes and everyone is talking about how evil or manipulative women are – and we don’t really talk about it or address it in class which is the weirdest part.

“We don’t talk about the overt sexism but we talk about basically everything else,” said Allyn. “We’ve spoken about sexism and social issues in like every other humanities course I’ve taken. I feel alienated and the men seem more comfortable with the readings than I do.”

Even in fields that are not reading or discussion-heavy, gender imbalances still persist. “Is there a gender imbalance in music? Yeah, there is,” said associate Professor of Music Maribeth Clark. “It’s always been a sense of mine that the students that are attracted to music composition are mostly cis-men, and the cis-women I don’t think of as being so moved in that direction.”

The sexist history of the music industry might explain the gender disparities that we see today. “If you look at the library shelf, the ML410s are the biographies and the ML427s are performers,” said Clark. “You’ll see far more women in the performers category than in the biographies of the composer’s category.”

“I try to encourage women who seem like they have those skills to move in that direction, but I think it’s more often that they don’t want to be part of that social group. They don’t feel like it’s their space. And that’s an issue.”

Why is gender representation important, anyway? “The problem is just a lack of diversity,” said Edidin. “You get certain perspectives and life experiences overrepresented when there’s a lot more that could be contributed that just isn’t getting there. Academia loses in that regard.”

*Information gathered from the National Center for Education Statistics. https://nces.ed.gov/programs/digest/d11/tables/dt11_290.asp

**Information received from New College’s Office of Institutional Research is organized by assigned sex at birth. There is no information regarding the preferred gender breakdown of AOCs.