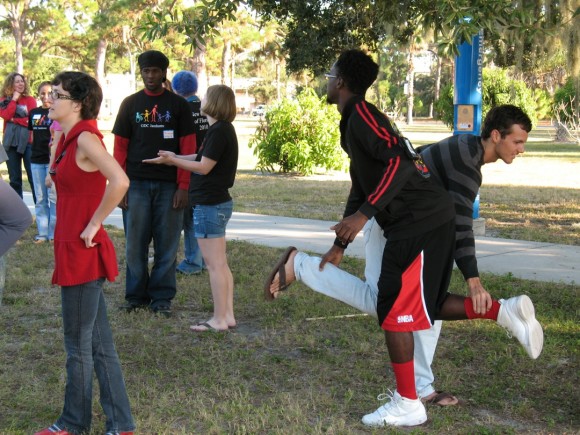 Students participated in ice-breaker activities at the GDC Jamboree.

On Sunday, Nov. 7, New College students gathered at the Keating Center for the Gender and Diversity Center (GDC) Jamboree, an event aimed at fostering a discussion about diversity at NCF.

Free food, t-shirts and raffle prizes lured students to the Jamboree that took place a long walk away from student’s dorms on a brisk fall day. Carlos and Jessica Benzan served students rice, beans, meat, guava, tortilla chips and salsa. While for some the food was reward enough for making the pilgrimage, first-year Daniel Monhollan reflected that “it was a surprisingly good time. It had a good turnout and it felt like a very positive experience.”

For the first portion of the event, students participated in ice-breaking activities. In one activity they were asked to orient themselves in reference to New College based on their favorite food, ethnic background and hometown. In another, students were asked to place themselves in a line that represented the spectrum of how feminine or masculine they felt, how attracted they were to men or women and what gender they identified most with.

“The point of all these different exercises was to show that there are different forms of diversity and that we are all diverse in different ways to one another,” third-year student and Pluralism Committee member Claire Comsikey said.

After the activities, students were led inside the Keating Center to participate in small group discussions. They were provided with an outline to spark discussion and asked to strongly agree, agree, disagree or strongly disagree with each of following statements:

1) the New College identity and culture fosters an appreciation for diversity.

2) the NCF campus is one in which all students are free to express their cultural identities.

4) NCF provided the awareness, knowledge, and skills that prepare students to live and work with people from diverse backgrounds.

Students then presented their group’s discussion to all the attendants of the Jamboree. Second-year student and member of the Pluralism Committee Tristan Zucker said that he was surprised that people disagreed over some of the issues, such as reverse discrimination and whether groups that are discriminated against should be able to gather with only members of the group like in a People of Color Caucus. “I think it is useful to recognize that these are hard issues to speak about and that we should respect that people are going to differ on them and that we should respect people’s opinions and make them feel valued,” he noted.

One of the most important issues brought up at the Jamboree was that New College may not be an accepting environment for students who are religious, conservative or more mainstream. First-year student Jonathan Niles reflected this mindset: “I think that in some senses because we are so stratified, that the norm here can be discriminated against. Because we are this little bubble away from the world, people think that they have some sort of right to criticize the mainstream. So, if you have some aspect of your own personal identity that is mainstream you get hurt really bad and I mean you can’t talk. Even if you don’t get hurt really bad you can’t participate in the discussion because they are just hating upon the socially conservatives. So it would be foolish to pipe up and say, ‘Hey I’m socially conservative!’ I think that there needs to be an awareness that it takes all types to make the world. And that we are all types here not just the wild and wacky, exotic sort of folk that we are that go around with dyed hair or who, you know, ride longboards everywhere.”

Students discussed how they could make NCF a more welcoming place for people who don’t identify with the school’s alternative culture. Monhollan said, “We decided in my small group that New College does a good job of advertising that it is for a specific type of person and that it is not for everyone — it is different. That really resonates well with a certain portion of the populace like liberal white families usually and now, New College should go and really explain how its non-traditional role can be beneficial to groups that aren’t usually as accepting of that, like more socially conservative or traditional backgrounds, ethnicities and religious groups. We should advertise to them.”

Another issue that students talked about at the Jamboree was the lack of racial diversity at NCF.  “One thing that we want to do would be to incorporate diversity programing into the institution,” Comiskey said. “Many of the professors that we’ve talked to about this said that in the years that they’ve been here, there have been waves of student involvement centered on diversity issues but after the students graduate, new students come in and the cycle starts all over again. One of the main issues is that this programming and the focus on these issues in the community has to be addressed by members of the administration in the long term in order to create a more inclusive environment forever — that isn’t just on the student’s shoulders.”

“The burden should be taken should be taken off students to meet diversity need,” Zucker said. “A lot of other college campuses have diversity programing and also diversity staff. So, while we are a small school it would be very helpful for us to have an administrative position related to diversity which can kind of be like the central location to go to for diversity related matters. Right now, responsibilities are so dispersed that it is just a small piece of anybody’s job description that nothing really gets done on an institutional scale, which makes efforts piece-meal.”

Zucker summed up the importance of having events like the GDC Jamboree that make students aware of the ways that New College struggles with diversity. “Ultimately we are working to make everyone feel included and to make the campus an inclusive place,” he said. “So, whatever views you profess, whatever you look like, you can find a valued place here.”