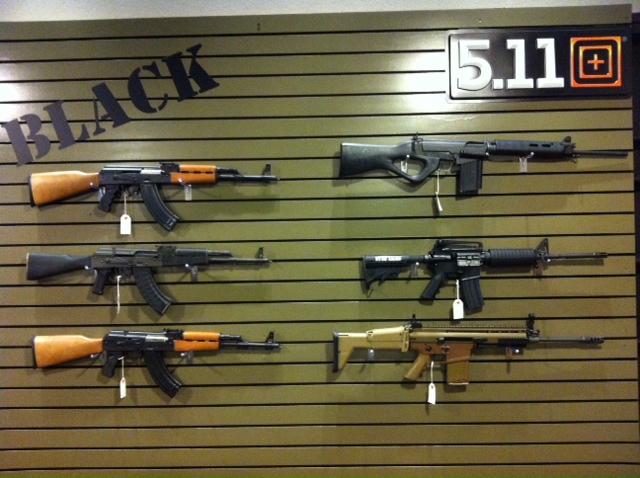 At Fully Loaded, the shelves are filled with firearms – pistols, shotguns, and assault rifles – but the local store also tries to cultivate a welcoming atmosphere. The building has a lounge where customers can relax, watch television, play chess, or enjoy a cup of coffee. Business is booming for stores like Fully Loaded as firearm sales rise nationwide in aftermath of recent mass shootings and rumors of new gun-control laws.

“A lot of people are buying … doctors, lawyers, high-rank people wanting stuff and buying multiple guns,” Beau Burton, one of the owners of the store, said. “A lot of women. We have a lot of women coming in looking to buy stuff.”

The string of high profile shootings over the last few months has sent legislators across the country scrambling to find a solution to make schools safer. State legislators in Texas and Arkansas have introduced bills that would allow the concealed carry of firearms at public universities, arguing that firearms allow potential victims to defend themselves.

According to the advocacy group Campaign to Keep Guns off Campus, 25 colleges around Colorado, Utah, Virginia and Michigan have allowed concealed carry on their premises.  In contrast, Democratic Representative Barbara Watson introduced a bill in the Florida House that is intended to guard against mentally unstable individuals buying firearms.

“Ammunition’s been going up in price, it’s very limited out there,” Burton continued.  “I’m getting it through some of my sources, but it’s hard to get. Its just more money. [This store] is just something we’ve wanted to do for a long time, and we’re doing it. It’s been busy; really swamped.”

New College students are unlikely to become patrons of Fully Loaded due to the school’s restrictions on firearms, which are prohibited along with explosives, chemical weapons, or any other lethal weapons. Students with a concealed carry permit cannot store firearms on campus under the current policy. New College Police Officer Wesley Walker thinks that this policy is unlikely to change.

“We have had people in the past here that were interested in shooting sports and so forth, and wanted to know what they could do with a gun, if they were allowed to have it on campus.” Officer Wesley Walker said.

Certain Florida campuses allow storage of firearms in campus police stations, but New College does not have a similar program.

“The issue is we’re a small agency,” Officer Walker explained. “We have limited resources as it is, we don’t have the facilities; it would just be a logistical nightmare.”

“I’m a concealed carry permit owner myself … but everybody who has one pretty much knows that the requirements for them in this state are not that strenuous,” Walker said. “You go to a gun show, you bring your ID, they help you process the paperwork; they take you to a local gun range and you fire a couple of rounds. As long as you don’t draw blood, basically, you’re trained.”

In cases of emergency, New College students are encouraged to be vigilant and follow official instructions. The most recent test of the campus response to an emergency was the January 12 plane crash, which involved a massive response from police and firefighters.

“Typically [emergency alerts] are somewhat vague because it’s an ongoing situation, it’s evolving,” Campus Police Lieutenant John Tully said.  “Everybody is used to watching something on TV and being privy to every detail of what’s happening at the moment it’s happening.

“But at least they give you that initial heads up: areas to avoid and what’s taking place,” Tully continued. “If you want to see what’s happening turn on Channel 6. You’d probably get more information there.”

The New College Police Department does have a plan in place to deal with an attempted mass shooting, although the details are kept confidential. However, Walker summarized the actions students and staff should take to remain safe.

“Turn off the lights, turn off your cellphone, hide,” Walker said. “Once police officers are on the scene … try to leave the scene in that direction. Just follow the directions; you don’t want to be waving your hands around or making any quick sudden motions.”

“Resistance is the absolute last thing,” Officer Walker continued. “But again, all of these are judgment calls.”