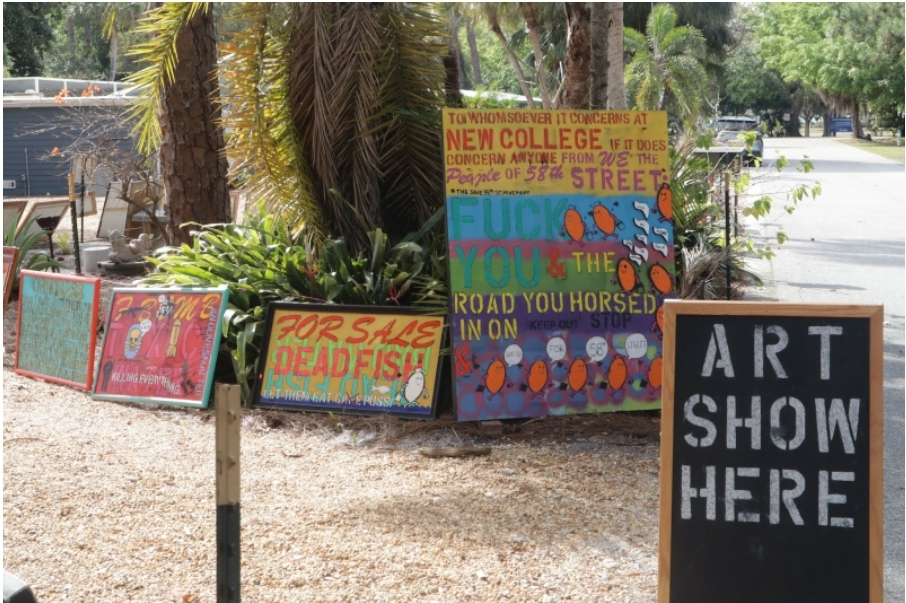 The residents of 58th St. hold an art show every Saturday from noon to 5 p.m. (weather permitting) in protest of New College's "58th St. Project."

By Nickolas Steinig and Sophia Brown

Colorful hand-painted signs have cropped up along the houses of 58th St., a two-lane road running parallel to Palmer B Dormitory, or B Dorm. The signs bear slogans including “How many roads & trees & wildlife will New College kill?” and “To whomsoever it concerns at New College… fuck you & the road you horsed in on.” Bracketing these signs, at the entrance to 58th St. and again at the cul de sac, New College has posted its own signage in that signature New College blue announcing the “58th St. Campus Development Project.” These signs state that New College will be paving a new road that connects 58th St. to College Drive.

“One of the high priority projects identified in the 2015 New College Campus Master Plan is the continuation of 58th St. to connect with College Drive,” Assistant Director of Facilities, Planning and Construction Itza Frisco told the Catalyst in an email interview. “This will improve automobile circulation and provide an alternative to Bay Shore Rd. The loop reduces car traffic on Bay Shore Rd at the Dort Promenade pedestrian crossing.”

“Well, the college says they’re going to connect our road, 58th St., to their road, College Drive,” neighborhood organizer and 58th St. resident Rachi Farrow said. “It’s going to be a thoroughfare with traffic, and it’s not needed. It will disrupt the lives of everyone on this road. Nobody wants to see that happen.”

“There are four houses occupied by human owners,” Farrow continued. “And we are all united against it. I have the sign on their lawn, on my lawn, and signs on the last lawn are coming. We all stand together. If we have to hire a lawyer, we’re in it. The owner of the furthest down house is an alum of the college. She’s a big donor, she’s donated to start programs at the college. She doesn’t want to see her place getting ripped up either.”

First discussed by the Landscape & Signage Subcommittee in November, the 58th St. Project was further developed recently in their Feb. 17 meeting. During this meeting, the subcommittee voted 4-1 to approve a proposed design, which was presented by Frisco. This design—bending slightly as opposed to the rigidly straight alternatives—would require five Cabbage Palms and a cluster of bamboo to be relocated. Five additional trees—Pines, Live Oaks and Sea Grapes—will need to be removed and replaced.

The removal of historic trees and foliage and the potential disruption to local wildlife are among the chief complaints made by 58th St. residents, who refer to the area the college plans to pave as the “Paradisaical Park.”.

“There’s a lot of wildlife that lives there and around it,” Farrow emphasized. “Besides the obvious squirrels and birds that you’ve seen, there are also owls, there are hawks, there are ospreys, there are foxes, there are coyotes, there are all kinds of little land animals. I’ve seen tortoises and walking catfish out in the rain. There’s lots of wildlife there that they will wipe out. They’ll take out a big chunk of habitat—and there isn’t much left. It deserves respect. Humans don’t have the right to wipe out other species. Do we?”

When asked to address complaints from residents that the project would disrupt the local ecosystem, Vice President of Finance & Administration Chris Kinsley responded in an email statement:

“I am glad to go on the record saying that my interpretation of the protest sign’s slogan ‘How much wildlife will New College kill’ is that once the loop is complete, the fear being expressed is that New College community members and guests will wantonly mow down the wildlife. Perhaps I am seeing an insult to us all where none is intended. In my limited experience, drivers on campus are generally mindful of the posted speed limits.”

Now that the road alignment has been approved by the Landscape & Signage Subcommittee, the design could be completed in as soon as six to eight months, or as late as 2023, according to Frisco.

The preliminary estimated project cost was $650,000 prior to this design approval, and it will be updated and revised once the design has been completed. According to Kinsley, the 58th St. Project will be funded as New College Fixed Capital Outlay Improvement, a form of funding supplied by the Florida Department of Education that “[provides] monthly distributions of cash to education agencies for project expenditures.”

When asked whether New College had reached out to gather input about the project from residents, Farrow said they hadn’t.

“It was more like when they were going to present their plan to the city, their 10-year plan,” Farrow said. “They don’t tell us anything. They don’t communicate with us.”

Kinsley confirmed that the college has not contacted 58th St. residents regarding the project up to this point, elaborating that “approval by the Landscaping Committee was the first step in the process.” He added:

“I am open if any resident wants to meet to discuss the project, and provide constructive input,” Kinsley stated.

Furthermore, the 2015 New College Campus Master Plan referenced earlier by Frisco suggests that acquiring the whole of 58th St. is the ultimate goal. Below is a map of a portion of the Bayfront side of campus from “Chapter 4: The Plan” which has sectioned 58th St. off for future land acquisition.

Residents were also initially unsure whether they had technical ownership of the road. Frisco confirmed that 58th St. is a private road owned by the college, but it is unclear at this time when New College purchased the road or from whom.

“Who would want to buy this [property] if the road was ruined?” Farrow asked. “Only the college. The college will want to buy it. And if they have no competitors, lowball the price. Right? Because they can. This land was all sold by one of the Ringling heirs who was land rich and cash poor. She sold the road—only one side of it. They want to take it back and they already have some [of the] properties. Next door to here, they bought [it] last year and they’re turning it into offices. If you look at their grand plan, none of these houses are here.”

The “grand plan” that Farrow referred to was the Campus Development Agreement made between New College and the City of Sarasota. The document states outright that “six privately owned parcels located along 58th St. are shown as potential long term acquisitions in order to plan for future residence halls and parking areas on the Bayfront Campus.” The following table illustrates the College’s plan for the land that 58th St. homeowners currently occupy.

However, Kinsley rebuffs potential claims from 58th St. residents that this construction might lower property values or the serenity of their homes.

“I would not agree that this project will make 58th St. less private, natural or less quiet,” Kinsley said. “However, even if it did, forecasting a drop in property values is speculative. To take one counter example, as Sarasota County has become in some ways less private, less natural and louder over the past 30 years, most properties have increased in value.”

Whether or not property values will change, residents still expressed frustration at not being having influence over the process.

“I don’t know how to stop it,” Farrow said. “They have a huge effect, they will have a huge effect on our lives. And they don’t seem to have any more concern about that than they do about the foxes who live in the grove.”

In an attempt to garner attention and sympathy from the college, residents are planning to hold a demonstration in concert with concerned students during the inauguration of the school president Dr. Partricia Okker on Feb. 23 from 4 p.m. to 6 p.m. at the ‘Paradisaical Park’ the college plans to pave.

“If we meet at the Paradisaical Park with small signs—not to disrupt the inauguration, but just bring attention from the people who were at the inauguration—that they are sitting at a place that’s going to be screwed up,” Farrow said.

Ultimately, residents seemed to want to reach an accord with the college.

“You know, in other ways, look, the college and the state are great,” Farrow shared. “We go and celebrate sunset every night on their land, and people fish there and they have picnics. And, it’s a wonderful place. Why screw it up?”