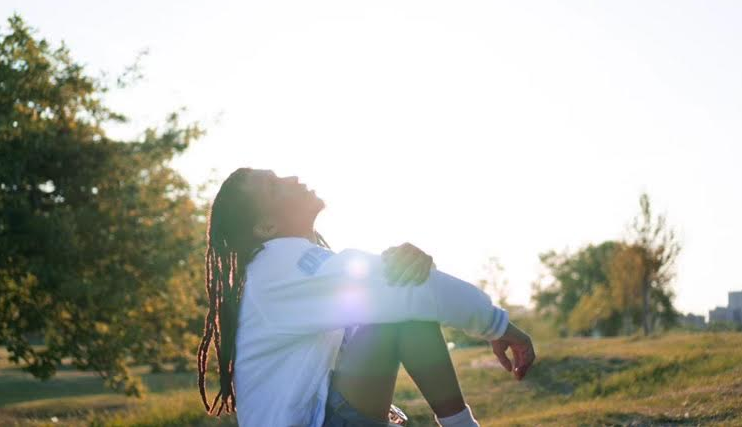 A shot of TYGKO, taken during a photoshoot for his latest, album, "Long Ass Breakup" (2021). Photo courtesy of TYGKO.

Music has always been a way for people to connect with one another. Few things in this world have the ability to break down barriers and allow freedom of expression the way that music does. Concerts alone are enough proof of this concept. Going to see your favorite artist that you’ve never met perform their personal creations alongside hundreds of other strangers, with nothing uniting you but mutual love for these particular melodies and rhythms. Unexpected like-mindedness reveals itself at these shows, giving people the opportunity to meet new friends and enjoy cherished sounds together. My conversation with Chicago-based rapper TYGKO (TYG) reminded me of this human experience that music provides us.

One day, while listening to music, I suddenly found myself bored of every song on my hours-long playlist. So, I went digging. I was in the mood for rap that day, so I searched my favorite rappers’ similar artist pages on Spotify until I found TYG’s profile. I had heard his name before, and I’d even heard him rap on some features, such as William Crooks’ “drive it like U stole it” and Mohawk Johnson’s mixtape Fire-Type, but I’d never bothered to listen to any of his solo projects. I decided I’d finally give his music a listen, and I was blown away by what I heard. His music struck a chord with me. TYG’s flows were making me bump my head and his lyrics had me cheering him on as if he was in the room with me.

I liked his music so much that I followed him on Instagram, which is typical for me. What wasn’t typical was when I got the notification that TYG had followed me back. For a moment, I was starstruck. A moment later I acted. I was so touched by his music that I wanted to let TYG know that he had himself a new fan. I wasn’t expecting a response. It would’ve been so easy for him not to respond. But minutes later, he did. We started talking. One thing led to another and TYG agreed to sit down for a virtual interview with the Catalyst.

Q: Why did you start making music?

A: So, the first time that I ever recorded, it was with my cousins and my brother, and they were just all recording and stuff. And they wrote a verse and they told me what to say and they pushed me in there. You know, I did it. That was my first time ever. So like, the first time I ever did it was out of just pure creative fun.

When I decided to actually go professional, I was in school to be a teacher, I went for English and Education. At the beginning of my junior year, they told me I wouldn’t be able to get my teacher’s license unless I took an extra semester, and I couldn’t afford that, so I was like “Fuck that.” The semester before that, my brother had passed away. His name’s Kevin. He was going by KO at the time. That mixed with them telling me I wasn’t going to be able to be a teacher was kinda like… alright, I’m just gonna be a rapper.

My Capstone project to graduate college was a rap album, so that after I graduated I was in a real position to do this. That’s what initially got me started in it professionally. I ended up moving to Chicago with my best friend who does all of my production and engineering [Cam Stacey]. He was like, “You’re really good, but you need to be around people who are taking it as seriously as you are.” We’ve been doing it ever since and made tons of friends along the way.

Q:  It’s very evident that your friendship and partnership with Cam Stacey is very important to you. How does that relationship come across in the music you make together?

A: I think that my favorite part is that we both often surprise ourselves. I think that’s where it comes across best in the music. When we’re just like, “I made this thing, what do you think about it?” Then the other person hears it and they’re like, “Bro, that’s crazy as fuck,” or like, “Alright, that’s good I can do something with this.” That’s for both of us, when I come at him with lyrics or when he comes to me with a beat or we’re making something together, it’s always just out of admiration and love. I think that comes across in the music in the way that we’re always trying new shit. We’re always trying new sounds. We’re not trying to bind one or the other back to any ideas that we have, it’s like, let’s just keep doing new shit.

Q: Do you ever feel like you identify with a certain genre or sound?

A: Yeah, absolutely. I think the sound I relate to the most is hip-hop. You know what I’m saying, rap music. Not like pop music. Because rap music has become pop music, because it’s the most popular genre now, but back when it wasn’t the most popular genre. Back when it was just rap, when it was Lil Wayne and Gucci and Jeezy and shit. That’s the era I came up in. I came up in the burning CDs era. A Kanye album cost five dollars where we had it, cause we got it from the five dollar CD man. It wasn’t about commodifying it to be replicable, it was about being irreplicable.

I’ll put it like this: When I did my album, Long Ass Breakup, I made it a pop album because I was being irreverent to what I was saying about the irreplicable nature of it [rap music.] On Long Ass Breakup, there weren’t any bars on there that you’d never heard before. That album is supposed to be relatable to everyone who has ever been in any sort of relationship or friendship. Like you were saying, people become a part of you when you become close. Sometimes when you have to separate… that feels a way. That’s a way that has been well-documented throughout music, throughout all genres of music. I think, while hip-hop is the genre I identify most with, I’m still aware of all the genres when I’m making shit. But I definitely consider myself a rapper, for sure.

Q: You’ve worked with artists like William Crooks and Mohawk Johnson. How did you start to form your relationships in the music industry?

A: So, those artists you just mentioned are artists that had a big SoundCloud following. At the time that I got in, it was like SoundCloud was right about to start dying. I only had repost chains for my first project and maybe the one after that. They got rid of repost chains early in my career. But that community was already there. I wasn’t privy to the SoundCloud culture, so I was just making fresh shit. I was making the best shit I had at the time.

Those artists that you mentioned, and artists now that I’ve met… it’s all about the appreciation of the art and the music and talking to each other. Just spending time with each other and getting to know one another. A lot of people ask about how to properly network and how to “get into the scene” and shit like that but it’s like… Really, you gotta have fresh ass music and you gotta talk to these people like they’re people. Me and William Crooks, we had foot races on the beach and shit. We got real memories. We spent hours just talking about butterflies and dreams and the stars. It’s just like, I broke in because I’m a genuine person. I make genuine music. Cam’s a genuine person. People like doing business with us.

We have a venue we run in Chicago called Bookclub and our value is placed in the quality that we can provide for people. Our value is placed in having artists walk away with more money than they came in with. “Everyone had a good time, everyone got in safe, everyone got out safe and you get to walk out with some money and pay your bandmates.” They’ll do another show with you, because you were able to do good business, because it started at the top. I feel like that’s why people was fucking with me, because from top to bottom, it’s all true, it’s all love.

Q: What goals do you hope to achieve in your music career?

A: I make goals. Creating Long Ass Breakup was a goal. Going on tour last September was a goal. That led to us going on tour again this September. I would say my biggest goal right now is finding a way to take all of this… this cardboard box shit and making it something realistic. Where I can, dare I say, get a salary to create a space for other artists and create art and perform and produce more cool shit. And not have to sell away the potential greatness that I could make. My goal right now is to legitimize what I’m doing with the music shit. That’s long-term, that’s a big dream.

Short-term is, we pressed the album on vinyl, Long Ass Breakup, and we felt like that was necessary because we felt like after we were done making it, we felt that we made a timeless piece of art. This is our first masterwork. We had to do it in a way that was timeless. We feel like we are creating something that is significant. The vinyls are up on Bandcamp right now, so they are available for purchase. I encourage everyone to spin the record first on Spotify or whatever, but if you love it, go on Bandcamp and buy the vinyl. Getting all those vinyls sold, that would be incredible. That’s where I’m at right now. We got a lot of big business stuff cooking, but also we gotta appreciate the stuff that we got already.

Q: Is this name on Zoom your full name?

A: Yeah, that’s my government name. TYG stands for ‘The Young God’ and I made it when I was a little kid, I was like 14 years old. Eventually, I ran into some people that were like, “You shouldn’t call yourself God, that’s kinda childish,” so I became TYG. KO stands for Kevi O. My name is also Kev, so, “The Young God Kevi O,” but TYG or KO is what I prefer.

TYG takes the human approach to his music career, and so far he has been rewarded for it with rich friendships and creative music. Some of my favorite tracks of his are “AOL”, “F. Kennedy” and “Purple Skies.”