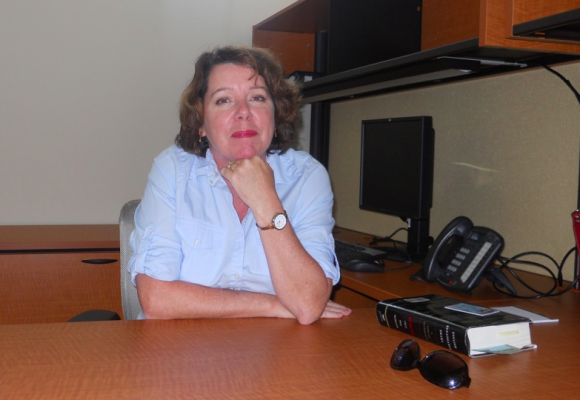 Basso has taught at the University of South Florida (USF) since the fall of 2007 and is currently teaching a cultural studies and pop culture class there on Thursdays. As a graduate student, Basso worked in USF’s writing center for two years and then began teaching regular courses such and Introduction to Drama, Cultural Studies and Early Shakespeare. This semester at New College, she is teaching Early Modern Revenge Tragedy and will teach two classes next semester.

Basso is originally from New York but has lived in Florida since 1992. She left New York the day after she found out she was pregnant with her daughter. “I came down here because I was tired of the cold winters,” Basso said. In the 1980s, Basso worked in the Caribbean as a cruise line casino dealer and pit boss. She was no longer used to New York winters. Basso was also drawn to Florida because of its lower cost of living and because it’s where her parents live.

Basso went back to school when her daughter was older. “I knew that I loved books and discussing books,” Basso said. She was awarded the USF graduate fellowship during her first semester there. “It was really a big deal because it’s a good amount of money, free tuition and then I would have a stipend,” she continued.

Her dissertation was on the character Portia as the center of Shakespeare’s Merchant of Venice. “When you find something on Shakespeare that hasn’t been written about, you have to jump on it because there’s not a lot that hasn’t been done,” she said. The dissertation took Basso two years to write and includes a critical history, a performance history which pays special attention to Portia and an interview with four different actors who have played Portia.

This year Basso is adjusting to her daughter starting her first semester at Florida State University. “I kind of felt guilty as a mom for not letting my daughter have a dog, but we would have had to put the dog in a kennel all the time,” Basso said. She says that she does not have any pets but does have some nameless fish. “We travel a lot so we never really thought that it would be fair,” she said.

It takes Basso one hour and 34 minutes to drive to New College from Hernando County for her weekly class. When she is not driving to New College, Basso searches with her husband for fresh ingredients such as vegetables and fish, goes to the theater or visits her friends. Between grilling vegetables with balsamic vinegar and traveling to Tampa to see a play, Basso reads and writes. “As far as writing my scholarly work, I’m best in the daytime before five,” she said. “After five o’clock I just can’t concentrate anymore” At the moment Basso is reading The Kid by Sapphire, the author of Push.

“Having just gotten my Ph.D this spring, my goal is to get a good tenure track position at a nice college,” Basso said. “I do think that I like the small college environment, the personal touch and the camaraderie. I’m open to all kinds of options, but I think that’s what I would enjoy the most.”

Basso dislikes random excuses and last second e-mails. She loves the students, intellectual exchange and hanging out with young people. “It’s so exhilarating,” she explained. “It’s energizing to be with college students. They give me energy and inspiration.”