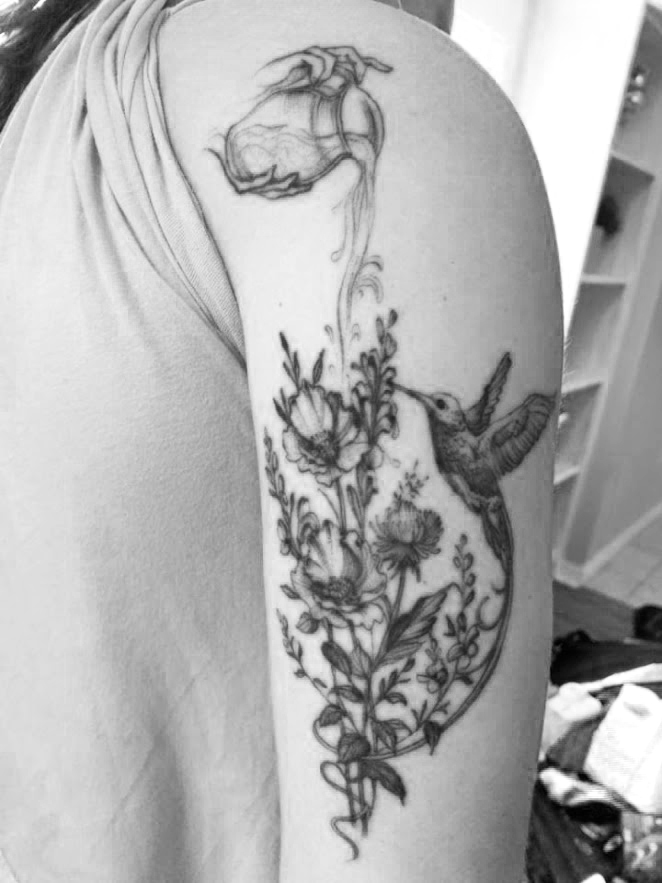 Second-year Jess Franks has six tattoos, but two stick out in her mind. She sports an upper-arm piece that connects her with her family.

“This one I got at my first school. At an event, a third-year was just like, ‘hey, do you want a stick-and-poke?’ and I said, ‘Yes,’ and then the whole night we sat in the lounge as she stabbed my ankle.”

The tattoos on their right ankle came after a little more planning: the first layer, including a black cat in remembrance of their childhood pet Domino, was done at Eternal Art on Bee Ridge Drive. About a year later, they went to Oddity Tattoo in downtown Sarasota, where artist Ambo Hendon added on a layer of towering mushrooms.

For both Franks and Bell-Nuñez, the meaning of their body art differs depending on the tattoo.

“The tattoo I have on my thigh I have because I think it looks cool,” Franks said, “And then for other ones I want something that’s me, since it’s on my body, and my family is a big part of me.”

Similarly, Bell-Nuñez likes all three of their tattoos equally and for different reasons. But they note that their family tattoo has a certain enamoring beauty.

Whether imbued with existential significance or the product of a late-night whim, tattoos at New College can make for meaningful social moments.

“When you have a conversation about tattoos, it can be a point of connection because a lot of people have stories about their tattoos,” thesis student Tirza Morales explained. “Art in general, it’s an expression.”

Morales’ most visible piece is a sun with a barbed wire outline.

Tattoo-catalyzed connections are not newfound occurrences at New College. In fact, New College had its own residential stick-and-poke artist up in alumnus Fran Andres, who graduated in Spring 2017. According to fourth-year Angel Reyes, Andres did stick-and-poke tattoos for people from his first year up until his graduation, and developed a philosophy about his artwork.

“He said that the outcome of each tattoo was a part of the experience of giving the tattoo, which included the other person, the conversation, the way he felt during the experience, the setting, etc.”

While Reyes doesn’t attach a lot of meaning to his tattoo, which Andres gave him during a return to campus in 2018, he explained that the tattoo provided a connection to New College.

“If you go to other colleges and you get a stick-and-poke, people are like, ‘What are you doing?’ It’s not the most common of things.”

Reyes mentioned that many people have New College-specific experiences with stick-and-poke tattoos. He especially remembers a B dorm spectacle from last year, in which one student gave another a stick-and-poke tattoo using nothing but a syringe—most people use an entire kit.

“I know a lot of people with dope tattoos here, and I’ve also seen some tattoos where I’m like, ‘Oh, you did that?’”