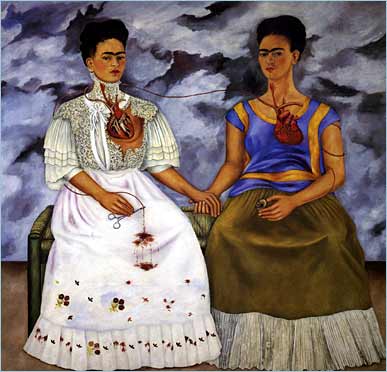 Professor of Art History Katherine Brion gave a talk entitled “Frida Kahlo’s legacy: Exploring gender in art and art history” during the Feminist Friday event on April 14. First given by Brion at the Dalí Museum of Art in St. Petersburg on March 1, the talk was organized to occur concurrently with a special retrospective exhibition of Kahlo’s life and work that ended on April 17.

The Dalí retrospective (covered in a previous Catalyst article entitled “Kahlo @ the Dalí: A biographical account of the artist through self-portraiture”) focused primarily on Kahlo’s identity and self-representation, featuring a collection of 60 paintings, photographs and journal entries that provide an extremely personal account of the artist’s highly stylized life.

Brion’s discussion considered the critical concept of ‘the gaze,’ an idea developed by feminist film critic Laura Mulvey in her seminal essay “Visual pleasure and narrative cinema,” in relation to this highly stylized personal narrative. Mulvey puts her interest in binary conceptions of active/passive (male/female) in relation to the cinematic notion of the audience, exploring the dichotomy between the individual viewer (who actively watches) and the object being viewed (which remains in a position of passivity that lacks agency). In Kahlo’s work, this notion of the gaze is utilized in a seemingly ambiguous way, simultaneously relying on an aestheticized and objectified gaze in her carefully managed self-representation while rejecting objectification and asserting her individuality through her often violent depictions of highly personal traumas and bodily functions.

“There is a way in which Kahlo seems so much like the epitome of a kind of female object, a victim, that’s not in control of her own destiny,” Brion said. “But when you look closer at her work – and this is the reason I think she was able to re-emerge as a kind of feminist icon in the 80s and 90s – you feel that, in spite of a lack of control, she displays this real self-possession and control through her imagery. Through these objects, these images of herself, she self-objectifies in a way. She turns herself into an image, but it’s an image in which she can really demonstrate her self-possession and reflect on her experience and kind of encapsulate it.”

Kahlo’s ability to simultaneously serve as both a victim of a patriarchal society and a symbol of female empowerment and artistic genius reflects the ambiguous nature of her life and art – a theme Brion explores in her discussion of Kahlo’s use of doubling and duality in both her works and her self-presentation.

“On the one hand she seems like the ultimate example that helps us see the situation of woman as victim, but then she makes that also into her own kind of thing, her own identity,” Brion said.

One of Kahlo’s most famous pieces, The Two Fridas, utilizes this notion of doubling through its depiction of two distinct representations of the artist. One Frida wears a Victorian-style gown, the dominant style of dress for Europeans from the period, her visage lightened to emphasize her father’s German heritage and Frida’s own identification with her European descent. The second Frida is adorned in the costume of a traditional Mexican Tehuana woman, representative of her mother’s Oaxacan ancestry and Frida’s interest in promoting the mexicanidad movement that developed with the Mexican revolution of the early 20th century.

“The more you look at her work it becomes more and more complex,” Brion said. “There are texts looking at her work in terms of her biography, and that biography still tends toward reading her works directly in terms of her life. So there’s a lot of works – like The Two Fridas for example – that were seen as being very much about her relationship with Rivera. There is more recent work that has revisited those same paintings and thought about how they were actually also related to these larger reflections about Mexican society, and the politics of indigeneity versus European heritage. Her work on a superficial view tends to be read as entirely about the personal but she was trying to giver her work – especially in some of the works she chose to exhibit publicly – a larger social resonance. I find that to be more compelling, the ways in which she was connecting this work that was very intensely personal on the one hand with the social movements and concerns that were going on in the period.”