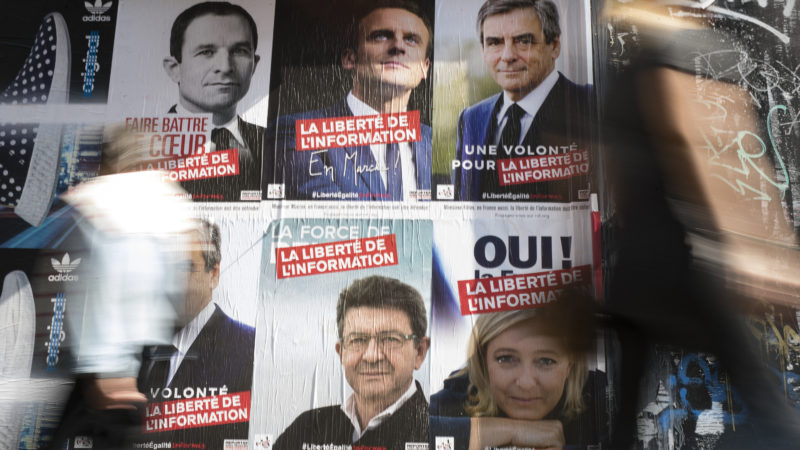 A pedestrian passes by posters by NGO group 'Reporters Without Borders' depicting six of the French presidential election candidates, including (clockewise from top left) Benoit Hamon, Emmanuel Macron, Francois Fillon, Marine Le Pen, Jen-Luc Melenchon, in Paris. [Ian Langsdon/EPA]
With four out of the five of this year’s French presidential candidates in favor of marijuana reform – and one, Benoît Hamon, advocating for full legalization – the future of marijuana policy reform in France seems to be moving toward decriminalization. Public opinion on marijuana use in France has also been shifting in a generally more tolerant direction – although normative opinions on marijuana use are still exponentially more negative than public opinion in the United States.

Drug policy in Europe has generally been considered to be progressive in nature, with Portugal decriminalizing all substances in 2001 – an attempt at implanting harm reduction techniques in the midst of a drug abuse epidemic – and much of the Netherland’s tourist industry revolving around the legal use of marijuana.

According to a 2014 World Health Organization study, France had the highest number of 15-year-old marijuana users in Europe. In comparison with Portugal and Spain, countries that allow for cannabis clubs and emphasize rehabilitation over incarceration (a continent-wide trend reflected in the small prison populations of most Western European countries), France, a country with no decriminalization measures, had substantially higher rates of drug use.

One of the two current presidential candidates, independent-centrist Emmanuel Macron, has advocated for the issuance of warnings and on-the-spot, 100 euro fines in place of the current policy of an up to one-year prison sentence and an almost 4000 euro fine for small-scale marijuana possession and/or use. Unsurprisingly, Macron’s rival, the far-right Front National candidate Marine Le Pen, has advocated for a “zero-tolerance” drug policy, with an increase in draconian drug laws and harsher crackdowns on drug dealers and users.