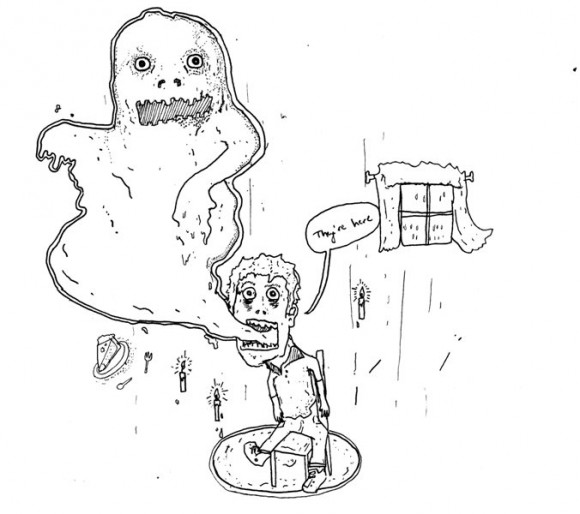 It wasn’t a normal dinner at the Four Winds cafe. The rain had not let up all day and the lights were out with the diners’ faces illuminated by candle-light and the occasional flash of lightning. “Don’t let go, its very important that we don’t break the circle”, said 3rd year Crystal Miller to a hushed room. The first of two New College students to serve as a medium that night, Miller led a group of nearly 20 classmates in a séance. A séance (pronounced /ˈseɪ.ɑːns/) is an attempt to communicate with spirits. The word “séance” comes from the French word for “seat,” “session” or “sitting,” from the Old French “seoir,” “to sit.” A séance can be conducted in a number of ways incorporating any kind of tools or rituals the group wishes to incorporate. This session was conducted in a traditional way without tools such as an Ouija board. All of the energy needed to make contact with the dead would have to come from the participants.

The weather certainly suited the event, with gusts of wind up to 60 and frequent lightning strikes the energy in the air was palpable. With the aid of a ghost-o-meter the Catalyst scanned the Four Winds for signs of paranormal activity.  The meter detects uncharacteristic shifts in electromagnetic frequencies. Leading up to the session the area around the blenders in the kitchen and the freezer in the office all showed signs of disruption. Despite the appearance of this phenomena, Third years Megan Lyons and Cody Gunton, the four winds employees hosting the séance, bravely went about their business. For the price of ten dollars they served coconut tempeh, sage-infused green beans, and vegan strawberry cheesecake that complemented the attendees’ paranormal experience. The diners were given time to enjoy the meal and a few moments to digest but were quickly urged to leave their physical processes behind—it was time for them to flex their psychic muscles once the séance had begun.

Miller prompted the attendees to hold hands, stare into the candle flames and visualize the person whom they wanted to contact. After several minutes of guided meditation the group decided to begin with circus elephants. What is now the café was purportedly the elephant the barn back when the campus served as winter ground for the Ringling Circus. Participants were hopeful that contact would be easier to achieve given the physical connection these entities had with the barn.  However after several attempts it became clear that the elephants were not coming. Miller probed the group to see if the elephants had chosen a host body encouraging them to “speak in whatever way is comfortable” but all inquiries were unfruitful. Though Miller detected minor psychic vibrations in First year Malorie Sneed and Gunton.

Shifting gears the group decided that a human entity would be easier to contact. Next on the list was the King of Pop himself, the recently deceased Michael Jackson. His recent departure combined with his personal connection to the group, perhaps the entire world, made him an ideal candidate for contact. The group again fell into silence, meditating on the candle flames. Brief contact was made near “the Gate”, an image the group focused on that represented the barrier between the living and the dead. Miller conversed with Jackson but he did not choose a host body, perhaps because, to his dismay, no one wanted to dance.  Tightening the scope even further, the group then attempted to contact family members. To this end the group was successful, achieving contact with Uncle Billy, a relative of Miller’s, for a number of minutes.

Leading a séance requires tremendous amounts of energy from the medium and Miller was unable to continue following this string of contact.  After some contemplation David Krane was more than willing to fill the void. Every medium brings a different style and manner to the table and the group attempted contact through new means under Krane’s guidance. Temporarily breaking the circle Krane instructed the participants to tap into the natural forces around them, to use the storm’s energy to supplement contact with the beyond. Contact seemed successful as the group channeled not a deceased spririt, but an elemental force—the spirit of thunder itself. Contact was maintained for several minutes as they attempted to vocalize the nature of the entity.

Unfortunately, in such a sensitive state the Catalyst forgot to use the ghost-o-meter during the actual proceedings. Thus the validity of these events can never be confirmed by science.  Still Miller, Krane and others are confident in the psychic nature of these occurences.