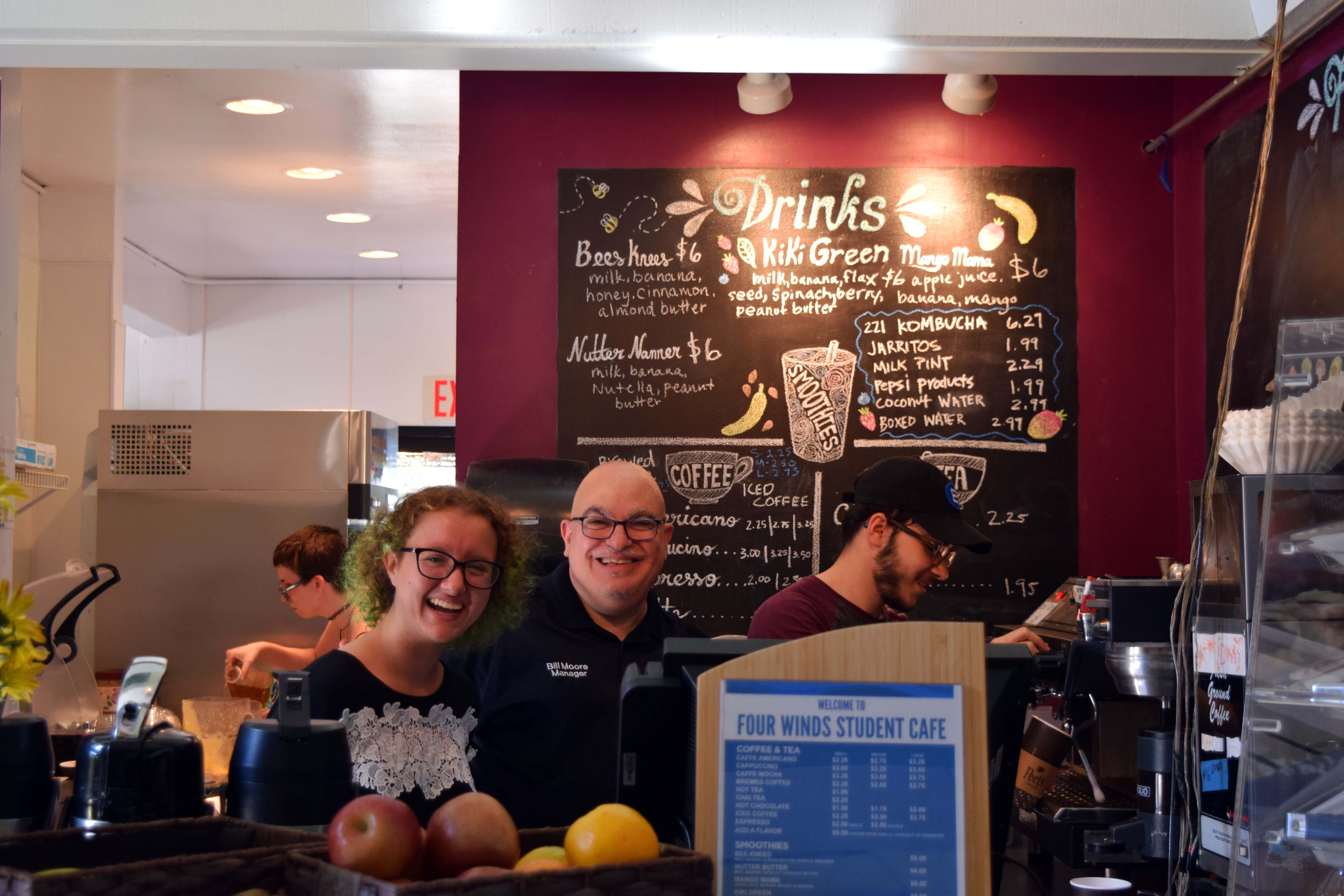 After months of negotiations, the Four Winds Café reopened its doors on Tuesday, Oct. 22.

The college carved out $24,000 which will pay Metz to assist with bringing Four Winds to a more business-savvy student run operation over the semester. The Board Of Trustees (BOT) money that was offered over the summer to help kick-start the café is still up for grabs, however the BOT needs a sound proposal from the Four Winds Committee before they provide the funds.

“The college is going to subsidize opening for the fall,” Senior Associate Dean of Student Affairs Mark Stier said. “[Metz] has got the building cleaned up, approved by the Health Department, a menu that has been shared with student committee members, they’re ready to roll out a training program for the student staff and they hired a new manager.”

The first Four Winds Committee meeting of the semester was held on Wednesday, Oct. 9. Jay Stewart, chair of the committee, along with five other students and Stier were present.

“The goal [of working with Metz] is to provide a training ground for the fall so that the students can be given the keys in the spring,” Stier said. “The committee’s responsibility right now is to work with Bill Moore, [manager of Metz] and John Martin, the Vice President of Finance, to create a proposal to at least have an operation that breaks even, ideally they want to make a profit, but bare minimum they want to break even.”

Details about the business plan and the best time to take back student ownership of Four Winds are being worked out as the committee decides how they want to shape the future of Four Winds. Stewart and Stier both emphasized the importance of students getting involved to preserve Four Winds. However, Stewart feels creating a business plan that breaks even isn’t feasible for the trajectory of Four Winds.

“The business plan was rejected because it had a projected $13,000 loss in the first year, which I look at as realism,” Stewart said.  “While that is not great, that is in line with what people expect from other cafés of a similar size. If you were to open up a privately owned café in an area with 800 people you would not expect to break even first year.

The student committee has reached out to economics professors on campus to get assistance with the business plan. Stier provided the committee with Metz’s budget plan for this semester, and Metz’s has stated they can assist students with creating a viable business plan.

“We need to make a plan that includes multiple options, including if we are going to continue some form of relationship with Metz and some plan if we are not going to continue any relationship with Metz,” Stewart said. “We have a few positives by going through Metz. First off, they’re hiring a manager part time for Four Winds and if we like that person then maybe we would stick with them. If we do that, that means we probably will be able to order through US Foods which would be a cheaper option. But if we are to go by ourselves, we’d have problems with looking for a service provider, so that would bring costs up.”

Four Winds opening date was pushed back because Metz was finding a manager and cleaning the café. The college has some leeway with assisting the student-run café to get back on their feet into the spring.

“We didn’t open when we wanted to, so we have some additional funds that we could use to continue it into the spring,” Stier said. “If the student committee needs more time to work on the proposal, we can do it until the money runs out, basically. Sales will extend the life of Four Winds into the spring.”

Bill Moore, the on-campus manager of Metz Culinary Management discussed the plans for the opening.

“Max who is a student here is working on having two bands there for me,” Bill Moore, the on-campus manager of Metz Culinary Management, said. “We’re gonna give away cake and some drawings for the café, probably have some games on the back patio, just some fun things to do. We are going to do some poetry readings that day, probably after the bands are done.”

“We’ve heard from the other side of campus, administration and all that, they would like to have food there but something a little more stable,” Moore said. “Once I talk to the committee, maybe we could add that down the way.”

Moore said there is potential to offer vegan or fish-based grab and go meals like salads and sandwiches at Four Winds.

“I worked there last fall and I really liked it, it was probably one of my most favorite jobs I ever had,” Thomas reminisced. “I’m excited that we’re opening again. It’s definitely going to be different because it’s under Metz, not just like Four Winds owned, but hopefully we’ll get it back to where it was by next semester.”

A local, retired school teacher was hired as the manager. She is the only manager for Four Winds, and will be working five hours a day.

“She’s excited about [the concept of Four Winds], and that made me happy,” said Bill.

“It’s a Profit and Loss (P&L) statement so if we [Metz] lose money, the college pays for it, but if we make money, then it comes to Metz,” Moore said. “You have to have a certain amount of revenue to be successful to meet all your costs, your P&L.”

Bill has some ideas for contributing to Four Winds creative spirit but wants input from the students. The Food Services TA, Daria Paulis, who did not respond to messages from the Catalyst, works to be the in between of dialogue between students and Metz.

For events held at Four Winds, students will need to go through the Office of Student Activities and Campus Engagement (SA[u]CE) and they will have to pay a Metz employee to be available to sell food and coffee, take care of the inventory and facility during the event and clean up after the event. In the past, a Four Winds employee did not need to be present at special events.

Bill is thinking of having a Happy Hour from 4-7 p.m., where they could have live music or poetry readings, and have free vegan pizza and other dishes, in order to promote community and revenue.

“I know on my end, the most important thing is that this is ready for the students to take over because I don’t want to see them take it over, it fails, and it closes again,” Moore said. “We’ve gotta find a way to keep this place open and running. If they’re ready and the students want to open it, let’s do it. If not, let’s wait.”

Both Moore, Stier and Stewart agree that for Four Winds to become successful, student involvement is crucial.

“This is your space, this is a student space. Unless we work to keep it, we’re not going to have it,” Stewart said. “If Four Winds is no longer a student run organization in five years it won’t be because of enrollment, any of the other issues, it will be because students here and now aren’t involved,” Stewart said.

“The only thing that students need to be aware of is that the future of Four Winds is 100 percent dependent on their participation,” remarked Stier. “If it comes down to lack of sales or involvement, there’s a chance that we won’t open [in the spring] the way we want to, under the student supervision. There’s tons of different ways it could be opened, but our first choice is to have this be a student-centered, student-run business model.”