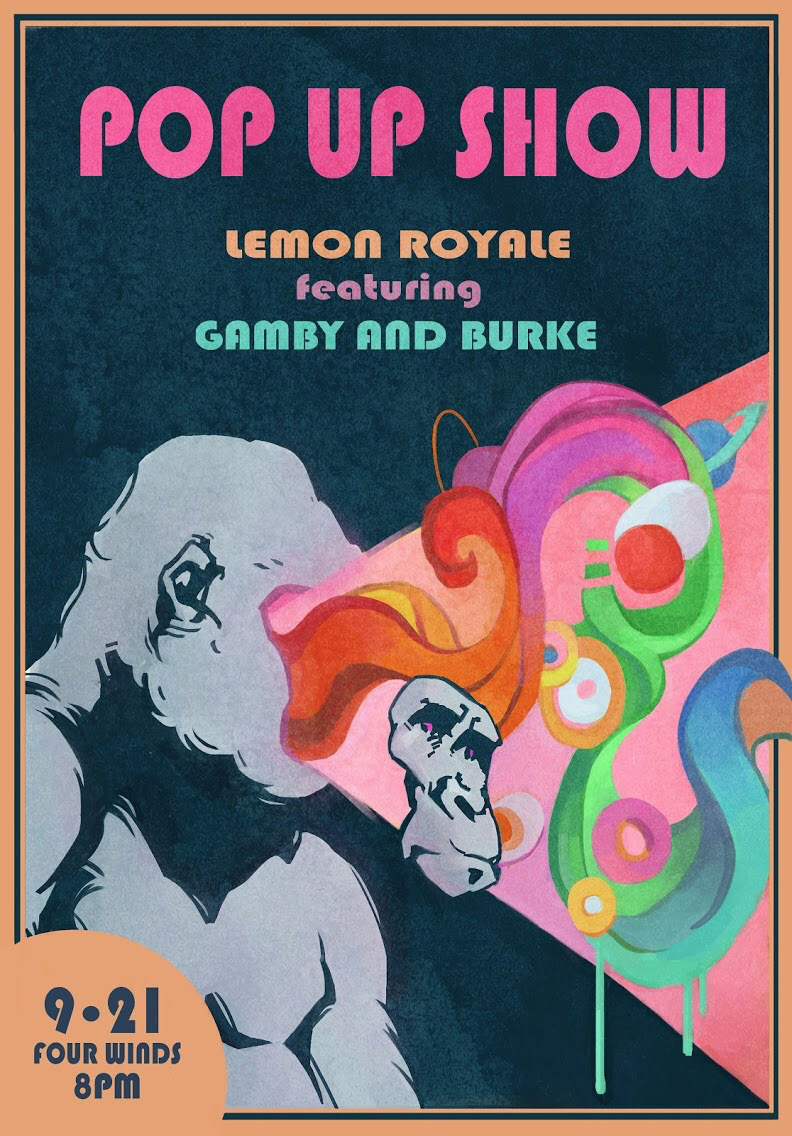 “It sort of fell into my lap,” Caccavo said. The event partially came to fruition through her roommate, recent alumnus James von Hollen (‘14), whose girlfriend Briana Lutzi is the lead singer of Lemón Royale, and a former New College student. “Briana was looking for a venue to do a show and I was like, ‘Hey, we could do it at the Four Winds!’”

Caccavo coordinated closely with Lutzi to plan the event and opening acts.

“Briana essentially figured out the lineup and she organized the logistics,” Caccavo said. “Briana’s really in the music scene in Sarasota and Gamby does violin for Lemón Royale, so Gamby was going to be performing both with Lemón Royale and as Gamby.”

Dismayed at the decreasing number of campus events in recent years, Caccavo hopes that this pop-up show will be the first of many this year.

“We used to have Four Winds shows a lot,” Caccavo said. “It’s changed so much. The process of throwing an event has become harder. Not only that, but the police presence on campus has intensified, which can make throwing events and inviting people from off-campus intimidating.”

After performing at Growler’s Pub one night, Lutzi was approached by Gambardella, who commended her singing and asked if she would collaborate with him. Lutzi, Gambardella and fellow musician friends began working on original songs together. In mid-2018, they officially decided to form the six-piece collective, Lemón Royale. The band comprises of Lutzi as lead singer, guitarist Liam Kaiser, pianist John Hetherington, producer and violinist Gambardella, bassist Andrew Appleseed and drummer Damon Owens.

As for the band’s name: “We drew different words out of a hat,” Lutzi said. “We landed on ‘royal lemon’ and then we flipped it around.”

Musical inspirations and influences for the band include Hiatus Kaiyote, Moonchild, Jordan Rakei, Donny Hathaway and Jacob Collier. The band tries to “play around with all different sounds” and incorporate them into their music.

All songs by Lemón Royale are crafted by the members themselves.

“Everything we’ve written is the most honest it could possibly be,” Lutzi said. “If I’m trying to express joy in my song, it’s because it’s my true honest joy that I have when I’m writing it.”

Lemón Royale’s music will soon be available on Spotify, Soundcloud, iTunes and Bandcamp. Before departing to set up for the show, Lutzi stated, “We’re all so grateful to do this. We want people to have fun and dance, eat, sing, cry a little if you want. Just enjoy it.”

Though currently based in Tampa, Electro-R&B artist Gambardella, who performs under the stage name Gamby, is originally from Sarasota. He developed an interest in music at a young age and began playing the violin when he was 4 years old. Gambardella began seriously pursuing music when he was 19, after his first semester of college.

“I was doing nursing school, I didn’t like it and I missed doing music, so I got back into it. I moved to Nashville for a few years and then moved back [to Sarasota] and have been just pushing since,” Gambardella said.

On the origin of his name, Gambardella said, “It’s actually a nickname of mine that has been passed down through generations. My cousin, my dad, my uncle, we’ve all been Gamby at one point, so I figured what a cool way to move the legacy on.”

Through his music, Gambardella conveys his story and past experiences.

“More or less, Gamby is an alter ego of my original self and it’s a lot of things that I’ve dealt with in my life,” Gambardella said. “Mental health issues, a lot of different abusive things that I’ve been through in my life, and kind of pushing them all together into music that can make you feel good, but also, if you dig into it, it’s got a double meaning.”

Fans can find Gamby’s music on Spotify, iTunes, Soundcloud, Youtube, ReverbNation and Amazon. Featured on the cover of his newly released EP, Astraea, is the EP’s namesake, his cat.

Students gradually streamed into the Four Winds as night fell, situating themselves on couches or moving through the food and refreshments line. Dancers crowded in front of the stage to vibe with the music. Notably, Gamby played a Guitar Hero guitar controller as a bass guitar during one song. At one point, Burke joined Gamby on stage and freestyled. Together, Gamby and Burke performed “Everything” as the final song of the opening act. After a brief intermission, Lemón Royale began performing at 9 p.m. The band played a set of alternating slow and energetic songs, some grounded by the beat of the drums or the strum of the bass, some carried by Lutzi’s soothing voice, but all very funky.

“I felt the show was cool, I liked the lighting,” first-year Kanti Gudur said. “There were really strong, raw vocals. I wasn’t planning on coming, but I’m glad that I did.”