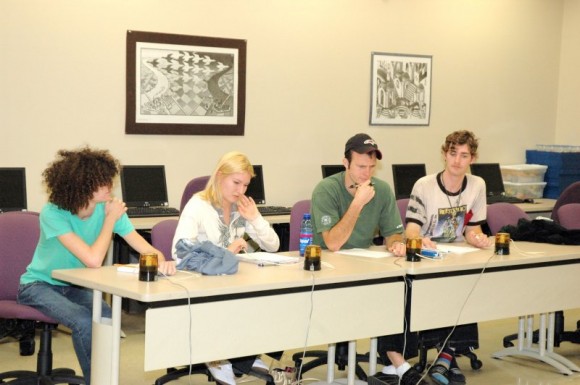 New College has had many academic trivia teams over the years. Alums Leafan Rosen (’03), Rebah Solomon (’05) and James Birmingham (’06) all tried to lead New College into the intercollegiate world of competitive trivia, often referred to as Brain Bowl or Quiz Bowl. These programs tended to die out in their infancy, when a student willing to devote their time toward organizing the program’s activities graduates or starts his or her thesis. The school has even owned at least one set of buzzers for practicing, according to Solomon and Birmingham, but they are nowhere to be found today.

The game of Brain Bowl is usually played by two teams of four. They listen to 20 paragraph length “tossup” questions, racing their opponents to arrive at the correct answer. This answer could be an individual, painting, novel, musical composition, film or any number of other things determined to be academically significant. The team that gets the correct answer then hears three “bonus” questions that they can collaborate to answer. At Valencia’s Delta Burke tournament, tossups and bonuses were worth ten points each.

The four students’ only loss was on the evening of Nov. 13 to the unofficial “Sandbaggers” team by a margin of 40 points. They entered the tournament’s championship rounds with a  record of nine wins and one loss late in the morning on Nov. 13. They then defeated Northwest Florida State College’s “A” team, nearly doubling their opponents’ score of 205.

This earned them the right to play Dallin Kelson, the one-man powerhouse from Chipola State College. Kelson accumulated 160 points before New College had a single one, but from a tossup on dwarves in Italian and Spanish Renaissance paintings on, the New College students staged a comeback. At the half, they were down by only 30 points. Kelson then got a tossup on William S. Burroughs from the very earliest and most obscure books mentioned in it: works from his Nova or Cut-up Trilogy.. He beat his opponents to the answers of the next six tossups, and ended the championship round with 395 points to New College’s 210.

Team captain Warne remarked that he liked the format of his high school games better, in which more than two teams could play at once and a wrong answer ended the question immediately, so as not to hint the opposing team(s) in on what could instead be the correct answer. Warne was the sixth-place top scorer in the tournament out of over 150 players, with an average of 45.83 points per game. He is considering History/Classics as a potential Area of Concentration (AoC).

Second-years Filmyer and Schueler are both considering International Studies and Economics as possible elements of their AoCs, and each brought a considerable knowledge of world geography and political science to the team. First-year Eveland was the team’s science player, answering various questions on chemistry and physics.

Both Filmyer and Warne remarked that they would be eager participate in a regular and lasting Brain Bowl “club” if students and faculty were to maintain one on campus. Any students interested in attending future competitions like this one should e-mail Bensen at nolan.bensen@ncf.edu.