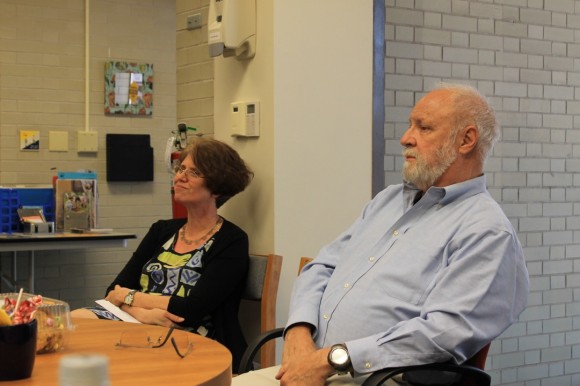 Dean Bashant (left) met Parker (right) through her husband, and introduced him to his audience.

The Career Center, formerly of Palmer E and now currently residing in HCL4, has recently begun hosting discussions and workshops in an effort to not only educate the students of New College on the usefulness of the Career Center, but also to create networking opportunities between students and Sarasota community members. On Tues., Apr. 17, with the help of Dean of Students Wendy Bashant, the Career Center introduced George Parker, former Chief of the United Nations news coverage, to a group of about ten students and faculty members for a “Career Roundtable.”

“I’m often times out and about doing things for the college and [I] meet people, and they find out I’m the Dean and they’ll say, ‘Oh, I’m really interested in New College, Id love to meet the students, how can I meet the students?’” Bashant explained to the Catalyst. “I ended up talking to [Parker] for a while […] and he has such an unusual background, in that he’s an English major, [has a] Master’s in Fine Arts and then kind of falls into jobs, which is actually not that unusual.”

Parker began his journey to journalism by working at the Long Island Star Journal as a copy boy, and worked his way up through jobs at the Associated Press in both newsprint and radio and Newsweek’s Public Affairs office. Eventually he made his way to the UN as a Press Officer, and eventually became the Chief of news coverage, where he supervised 35 English and French journalists who were assigned to the international media delegations and UN secretariat officials. He was also employed as a UN Information Officer and chief editor of news coverage, writing speeches and articles about the international community for delivery to international audiences.

“I’ve had a very winding sort of career,” Parker told his assembled audience.

For the first half of the Career Roundtable, Parker described what he did both prior to and during his time at the UN. He also mentioned his wife, who worked at the UN as well, but now is a linguistic consultant for the Federal Bureau of Investigation and is regarded as the best Spanish-to-English contractor in Florida. The second part revolved more around audience questions about both his time as a journalist and his thoughts on the futures of both the UN and news and print media in general.

“The problem [facing the UN] is establishing believability among the peoples of the world,” Parker said. “The challenge is that the UN’s political transformation is not effective because you have primitive members of the Security Council […] who can veto any sovereign action that the UN wants to take.”

Parker also took the time to answer questions about obtaining jobs in journalism and at the UN. His biggest suggestion was to do well in school so as to portray as attractive a resume as possible.

“Basically, the UN is dying for talent,” Parker concluded.

At the end of the roundtable, Parker expressed a willingness to become more involved with the students and answer any other questions they might have for him via e-mail.

“Sarasota’s an interesting place, because a lot of people decide they want to retire and then they come down here and don’t have a clue as to what they’re going to do,” Bashant said during her interview. “We want to get them connected to students. I know [Parker] would be very interested in working with students, and these [Career Roundtables] are the sort of natural way to get people invested in the college.”