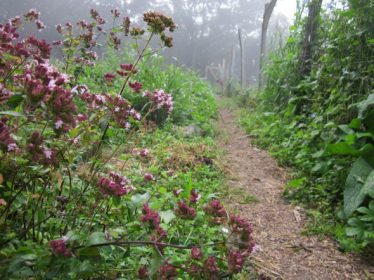 The food forest, located on the Old Caples campus, currently has one Teacher Assistant (TA): thesis student Steven Bressan. As the food forest TA, Bressan works six hours per week to upkeep the food forest and plan for its future growth. The food forest started in 2016 as a thesis project and a form of taking action in response to climate change.

“The person who set up [the food forest] wrote his thesis about the process and took some scientific measurements of soil quality, so this year for my thesis, I performed follow up measurements on the soil,” Bressan said. “When it was created they wanted to not only produce food for the community, but to also sequester carbon in the soil as a first stand against carbon dioxide levels in the atmosphere, like something we can actively do at New College to help mitigate this big global problem.”

The food forest TA also assists the gardening tutorial whenever students need to work in that area. The forest is primarily made of tree fruit, berry bushes, leafy greens and edible flowers, though gardening students continue to add more variety to the land.

“We [recently] planted some seminole pumpkin seeds, which are native Florida pumpkins and they grow really well, and by the end of the semester they should be around,” Bressan mentioned.

Bressan decided to become a food forest TA in Fall 2019 when he took a course about orchid management and production.

“[As] a kid we had an orchid at my house but I wasn’t super into it,” Bressan said. “I liked eating the apples but I didn’t really like working with the orchid, [however], after this orchid class I became really interested in it and in the spring took the gardening class and [gained] some direct exposure to the food forest.”

This TA position is funded through the Council of Green Affairs and for the upcoming school year another food forest TA application will open.