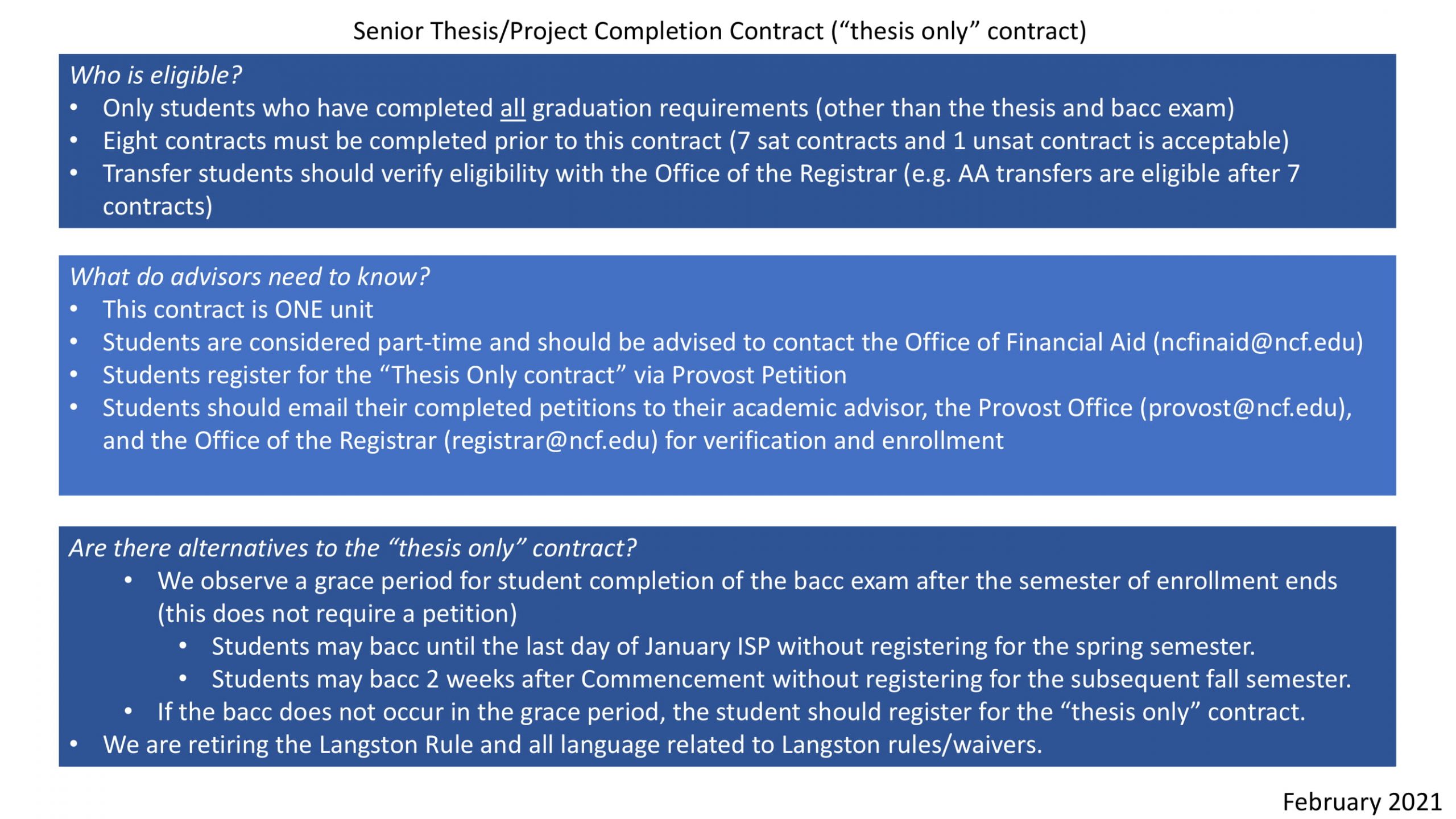 When the thesis-only contract was announced a few weeks ago, many were concerned as to what it meant for the Langston Rule. It turns out that it is not exactly gone, but it is not the same either.

On Feb. 16, The Educational Policy Committee sent out an email to the students list, intending to clarify the status of the Langston Rule. This email says that nothing has changed within the set of grace periods available to thesis students known as the Langston Rule other than the name.

This is in sharp contrast to what had been said earlier—that the Langston Rule was being retired along with all of the language relating to it—as the thesis-only contract went into effect. Although it may still be available in the new email, the thesis-only contract was worded as an “extra option” instead of an outright replacement. Despite all of this, the question of if the Langston Rule is formally, informally or completely and utterly gone has remained unanswered, until now.

This is what Aron Edidin, member of the Educational Policy Committee, said on the matter.

“The possibility of petitioning for waivers of the Baccalaureate-date deadlines is still there. It hasn’t been removed, either for now or at some projected future date,” he clarified.

Edidin also explained that “The situation before now was that students missing the deadline had to enroll for a full semester if the deadlines weren’t waived. Now if the deadline isn’t waived it’s possible to enroll and pay for thesis work alone. As time goes by, especially when we come out of the COVID-19 pandemic, this will make it less likely that waivers will be granted for work extending significantly into the next semester.”

Decisions about waivers will be left to the Provost’s Office. “Speaking for myself, what I expect is that waivers will be granted for short extensions for work that ‘just misses’ the deadline, for those who missed the deadline due to emergencies beyond their control and for cases in which enforcing thesis-unit enrollment would impose significant hardship.”

In the same vein, he concluded that, “If the student just takes a lot longer to finish the thesis than they’d hoped and they’ll be working with their sponsor and committee well into the new semester, they’ll enroll for a thesis/project completion contract.”

Another issue—how financial aid applies to thesis-only contracts—has also been cleared up. In the past, there had been concerns raised about the fact that thesis contracts may not be eligible for some types of financial aid, due to their part-time nature. Associate Director of Financial Aid Kim McCabe provided details on the subject.

“Because the thesis-only contract is worth 4 credit hours, a student is not considered full time – or even half time for the semester,” McCabe said. “Half time would be 6 credit hours. A student on this contract would only be eligible to use 4 credit hours of Bright Futures, if they are eligible and have hours remaining. If they are Pell eligible, they could also use 1/4 a semester Pell award applicable to their FAFSA EFC (Estimated Family Contribution).”

She further said that federal loans are not available to a student if they aren’t enrolled at least half-time.As far as loan repayment goes, thesis-only contracts are in the same boat as the Langston Rule, with repayment going into effect six months after full or half-time enrollment for both.

When looking at the reasons for why the thesis-only contract was introduced, its supporters point out the uncertainty of the Langston Rule petitions and the unfairness inherent in having faculty assist students for thesis work uncompensated. Detractors say that students should not be charged for more time to finish something so essential. Regardless, the Langston Rule still exists at an effective level, even though the name has been retired.