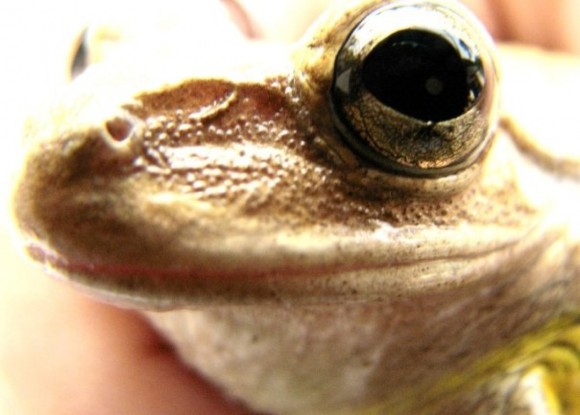 Cuban tree frogs, introduced to Florida in the 1920s, eat at least five different species of native frogs, along with the occasional lizard or small snake.

Exotic animals can make for unique pets – and uncontrollable pests.

Florida has the largest number of established non-indigenous reptiles and amphibians in the world and the most introduced in the United States, according to a study in the September issue of Zootaxa, which traced the majority of the problem to the pet trade.

“There are different levels of invasion,” Joseph Burgess, one of the study authors, said. “You  can have an animal that is released into a new area and is considered an exotic species. But if it doesn’t establish, if it’s not able to reproduce, than it’s just an introduction.” Burgess is the Natural Resource Manager at the Guana Tolomato Matanzas National Estuarine Research Reserve (GTM NERR), part of the Florida Department of Environmental Protection (DEP), but took part in the study independently of those organizations.

Releasing non-native species into the wild may impact the ecosystem and can be harmful to the animal itself, which may not be equipped to survive in the new environment. “It’s illegal, it’s unethical and it’s generally inhumane,” Scott Hardin, Exotic Species Coordinator at the Florida Fish and Wildlife Conservation Commission (FWC), said.

Kenneth Krysko, a herpetologist at the Florida Museum of Natural History, University of Florida (UF), led the nearly 20-year-long study, which verified 137 different introduced herpetofauna (reptiles and amphibians) in Florida from 1863 to 2010. Of those, 56 are established. Hawaii, which has the world’s second-worst problem, has 31 established exotic herpetofauna.

The researchers found that the majority of established non-native species in Florida are lizards, with 43 exotic species compared to 16 native lizards.

“There are actually more introduced lizards in Florida than there are native lizards in the southeast United States,” Burgess said.

A number of researchers and volunteers took pictures and collected samples of specimens to provide what was in many cases the first voucher for these exotic amphibians and reptiles. Researchers documented the year and pathway of each introduction and found that about 83 percent of introductions were linked to the pet trade industry. Some animals escape pet shops, while others are released by their owners.

“A lot of people think that they’re doing their pet animal a favor by releasing them into the wild,” Hardin said. “Well, those animals are rarely able to handle the wild.”

While it is illegal to release an exotic species without a permit, no one in Florida has ever been charged with that offense. “That regulation is more for educational value, because it’s almost impossible to catch anybody,” Hardin said.

Currently, the FWC is ultimately responsible for most extirpation efforts.  “Our preferred option is to get there as quick as we can and to get rid of [an introduced species] before they become established,” Hardin said, explaining that there is often little time to first assess whether or not a non-native species has negative impacts. “So we do try to extirpate incipient populations to avoid taking that chance. But don’t let me give you the wrong impression — by the time we hear about it, it’s normally too late.”

Researchers say little is known about the environmental impacts of introduced reptiles and amphibians. “In most cases, these animals will not have huge impacts,” Hardin said. “[But] there are specific cases where they could have impacts on some native species. The greatest concern that I have is for vulnerable species, endangered species, like the Burmese Python eating a Key Largo Woodrat, or possibly Nile Monitors eating the eggs of the American Crocodile or preying on some of our wading birds.”

According to the study, so far in Florida, there has never been a verified established exotic amphibian or reptile that has been completely extirpated. “When you already have a successful invader, it’s just super difficult to remove every single animal,” Burgess said. “All you need is a couple animals to get together and start to reproduce.” He cited the Burmese Python as an example. “It will not be able to be extirpated,” Burgess said. “It will only be able to be controlled.”

The study referred to is: