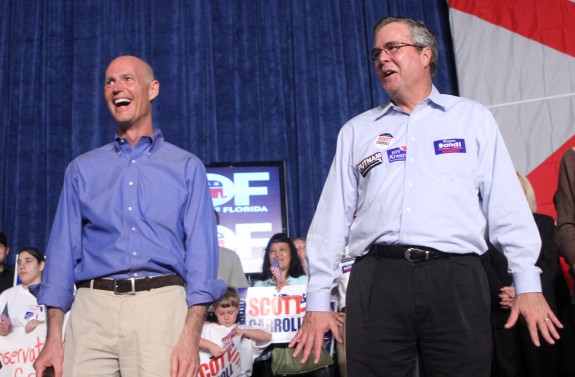 photo courtesy of the Orlando Sentinel

Scott rallies with former governor Jeb Bush during the home stretch on the Nov. 2 election.

Newspapers across the country are referring to the Nov. 2 election results as a “red tide.” This runs counter to the conventional wisdom that the addition of a popular third party – in this case, the far right-leaning Tea Party – splits the right-wing vote and leads to a Democratic victory.

Florida elected a governor who ran on an explicitly anti-Obama platform, a senator who warns that we are currently on our way to resembling his parents’ home country of Cuba, and four more Republican representatives to the US Congress than we previously had.  Add to this a new Attorney General, Chief Financial Officer, and Comissioner of Agriculture, all of them Republican.

In the state legislature, tallies had not yet been completed as of Nov. 5. By then, of the 16 Senate seats that had been decided, only three districts had gone to Democrats. The Florida State Department Division of Elections projects that the State House will end up with 81 Republican seats out of a 120 seat total, and that the State Senate will spend the next two years with a 28 out of 40 seat Republican majority.

Florida also had six amendments to the State Constitution on its ballots, along with a non-binding referendum calling for a balance in the federal budget. 72% of Floridians voted for this referendum, passing it.

The biggest news is the victory of far right Republican and ex-Chief Executive of Columbia/Hospital Corporation of America (HCA) Rick Scott. Scott resigned from his position at Columbia/HCA, the largest owner and operator of for-profit hospitals in the US, in 1997 when it was in the process of settling what the federal Department of Justice calls the “largest health care fraud case in US history.” The corporation ended up pleading guilty to 14 felonies and paying $631 million in fines and damages. Scott had defeated Democrat and State Chief Financial Officer Alex Sink by less than 62,000 votes – about 1% of the total – as of Nov. 5.

Marco Rubio also made headlines by obtaining a 49% plurality in a US Senate race against Democratic underdog Kendrick Meek and current governor Charlie Crist. Rubio counted on the state’s influential hispanic vote and became a darling of the Tea Party movement early on in this race. His official website advertises his experience in the State House, highlighting such activities as redistricting efforts, defense of private property rights, “cracking down on gangs and sexual predators,” promoting energy efficiency, and failed efforts toward a flat statewide consumption tax.

Two candidates for the Florida House of Representatives this fall were near and dear to New College:  Associate Professor of Political Science Keith Fitzgerald and alum Zeeshan “ZJ” Hafeez (’01). Both ran on Democratic tickets in the Sarasota area – Fitzgerald as a four-year incumbent – and both lost to Republicans. Hafeez was defeated by Iraq War veteran Greg Steube by more than 40% of the vote, in a nearby district long-held by Republican and state House majority whip Ron Reagan.

Of the six amendments proposed in the Nov. 2 election, three passed. Because amendments require a 60% majority vote, the attempted repeals of a law providing state money to “candidates for elective statewide office who agree to campaign spending limits,” and a law establishing maximum class sizes in public schools, both failed narrowly. A law requiring a popular vote to uphold any changes to local “comprehensive land use plans” proved wildly unpopular, garnering only 33% of the vote.

Both components of an effort to curb future gerrymandering passed. Amendments 5 and 6 will prohibit politicians from redrawing legislative and congressional districts to disenfranchise minorities or their opponents. They demand that districts be “compact, as equal in population as feasible, and where feasible must make use of existing city, county and geographical boundaries.” An uncontroversial amendment offering a property tax exemption to currently deployed soldiers also passed, with 78% of the vote.

Information for this article was taken from The New York Times, Florida Election Watch, the US Department of Justice, the St. Petersburg Times and BBC News.