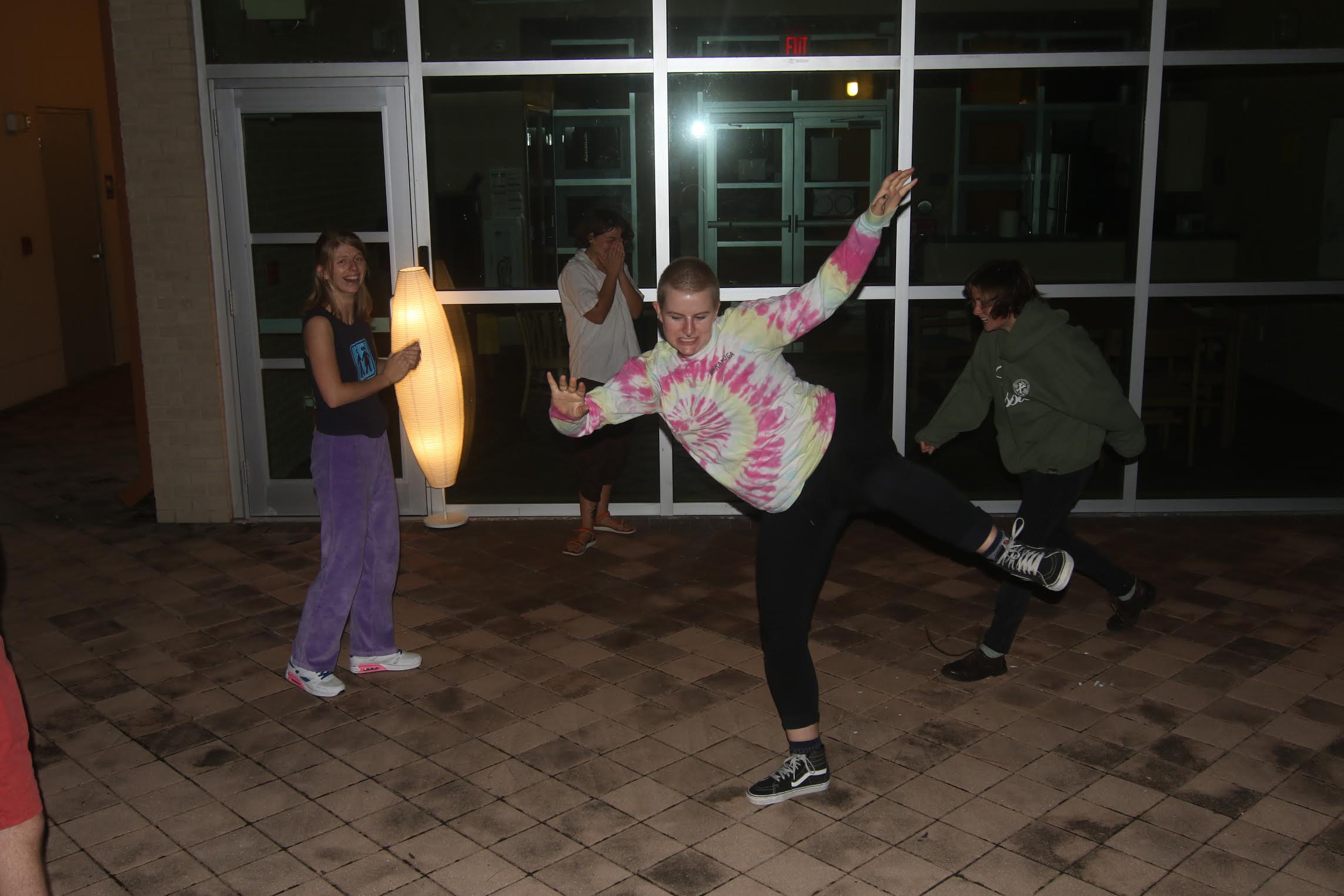 Corinne Leavengood, Olivia Siegel, Charlie Leavengood and Erin Everdale (left to right) had a dance off.

There’s no conglomeration of students more rowdy on campus than the Comedy Friends, or, according to third-year Olivia Siegel, the Comedy ‘FREAKS!’ The Comedy Friends is an ever-evolving group of students who get together weekly to play improv games. Their goal: to laugh, to play and to get down and dirty with comedy. A few times a year, they traditionally have a show in the Black Box Theatre (BBT) that is open for attendance by any and all on campus. Their next show will occur on Thursday, Nov. 29 at 9:30 p.m. in the BBT, and is bound to cause a wave of fun and games.

According to Ben Kearns (‘11)—a “comedy fellow,” or a New College graduate who used to be a member of Comedy Friends—the club has been around since 2011. Nowadays, “comedy fellows” are allowed to return to participate in shows as long as they can make it to a rehearsal beforehand. Before the club was officially created, there was a similar but non-canonical improv group called “The New College Football Team.”

Siegel has been in the Comedy Friends for about a year and a half, and spoke on the semesterly evolution of the troupe, which currently has nine friends.

“The dynamics are constantly shifting behind the scenes,” Siegel said. “I think it’s a good thing in a way because it keeps everything fresh and we’re not falling into rhythms. Instead we’re kind of constantly having to adapt to people’s own stuff, so it’s pretty cool.”

Some of the games that the troupe plays include “Four Corners,” “Alba’s Airplane,” “It’s All Fun and James,” “Change,” “Lily’s Lip Sync,” “Sitting, Standing, Lying Down,” “Pillars,” “Schmucks” and “Dad Game.”

Third-year Bob Lawlor joined the Comedy Friends in his first year and is a strong advocate for “Change,” described as a challenging game which involves three-person scenes. In “Change,” members get suggestions from the audience for emotions, relationships, items or places for the scene, and at any point during the game someone can yell “change.”

“So if I had just said, “I am a lizard” and then someone yells “change,” then I have to change what I just said to something different like, “I am a bird,” or literally anything,” Lawlor said. “It creates scenes that just go in so many different directions.”

Thesis student and Comedy Friends newcomer Abigail DeGregorio auditioned for and was accepted into the troupe this semester. Her favorite game so far is “Four Corners,” which involves four people who stand in a square and rotate regularly to match up for a variety of two-person scenes.

“It’s a really chill group of people,” DeGregorio informed. “I enjoy being in it, and I encourage others to be in it if they so desire, or if they feel like they want to get silly.”

Every person can bring something new to the table of comedic dynamics, so the members strongly hope that people come out to auditions if at all interested. When Siegel decided to audition, she was excited.

“I saw the Comedy Friends my first year, and then was like, ‘I’m funny! I want to audition,’” Siegel shared. “I wanted to do some form of theatre because it’s my only outlet for performance. It’s super freaking fun. It keeps you on your toes and if something starts to get stale it’s really easy to pick it back up.”

Lawlor speaks of improv as a great way to express oneself by temporarily being someone else.

“Every year you get new people with new ideas and new personalities and that’s always a good thing for improv, because everybody’s style of improv is different,” Lawlor said. “Come out and audition even if you don’t think you’re funny because someone else might think you are.”

The next Comedy Friends show will occur on Thursday, Nov. 29 at 9:30 p.m. in the BBT in Hamilton “Ham” Center. Auditions occur at the beginning of every school year.