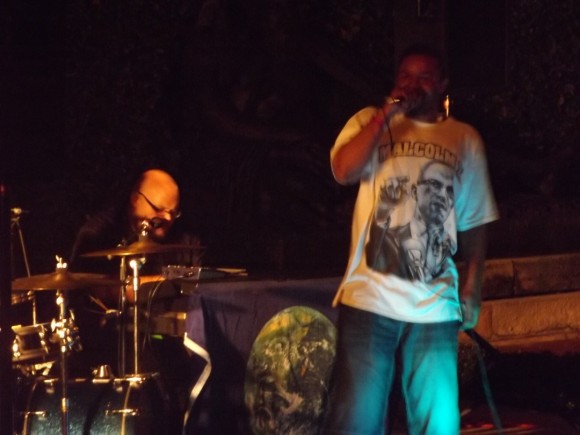 The John and Mable Ringling Museum of Art held its second edition of Ringling Underground on Mar. 1. The event, which is held on the first Thursday of every month, has a specific musical theme which decides the decor and entertainment. Ringling Underground was established to merge popular night-life culture with artistic influences.

“One of the missions of Ringling Underground is to attract a younger and more diverse audience,” Promotions Assistant Shakira Refos said.

After getting a wristband, attendees had to wind their way through the dark gardens to enter the art museum. A large graffiti canvas stood alone in the elegant entrance walkway bearing the words “Ringling Underground” in bright, psychedelic colors. The graffiti and the loud, throbbing music were the only evidence that something was taking place behind the arched glass doors.

The true assimilation between popular hip-hop and classical artistic culture took place in the voluminous, central courtyard. Here, one was shown how the Herculean bronze replicas of David, Discobolus and the Laocoön could form an impressive backdrop for a hip-hop performance.

The first  performance was by Geno & Skunk Boogie, a rising hip-hop/soul duo from Bradenton whose goal is to move away from overplayed, deadpan rap and begin to infuse life and meaning into a new form of hip-hop. Their performance included air-guitars and a person dancing in a gorilla suit. Big Blu House and Suta & Yungn also performed later in the evening. Big Blu House describe themselves on their Facebook page as “modern Hip Hop with old school sensibility”. Sota & Yungn, whose song “Watch Me Shine” has recently become popular on the radio, burned incense on stage to set the mood.

A cash bar was placed on both sides of the courtyard along with catering from Treviso, the museum’s fine dining restaurant, as well as free Starbucks tea samples from the Visitors Pavilion, located upstairs from the gift shop. The prices for food and drink were reasonable, and Ringling tries to keep everything as affordable as possible. By providing catering from their own food services, Ringling is able to advertise its dining opportunities and encourage visitors to eat at the museum.

The crowd began to thicken around 8:30 p.m. and was comprised of a diverse mixture of college students, families and adults in their early 30s. Overall, there were around 400 people in attendance, which was about the same amount as last month’s edition. Admission was free for students who go to college in the area, $5 for other college students and $10 for adults. All the proceeds go directly to the museum to aid it with conservation, maintenance and other special events.

To represent the artistic side of Ringling Underground, the rotating Peter Paul Rubens print exhibit, the ‘Joseph’s Coat’ Skyspace and the abstract art exhibit were all opened for the night. Each instillation provided an interesting array of specific artistic genres that appealed to a broad audience.

Ringling Underground is just one of the many actions the museum has taken to appeal to a younger audience. “Beyond Bling”, a hip-hop inspired exhibition, was displayed in August of last year and a focus of the 20th Century Abstract installment is currently being exhibited.

Along with attracting a new audience, Ringling Underground allows individuals to view art, music and culture that they may normally be exposed to.

“Locals who have not been to the Museum since they were teenagers are back to rediscover the permanent collection, to see the rotating exhibitions as well as the more contemporary additions,” Refos stated. “Being located in between the biggest colleges in Sarasota gives us a great opportunity to reach out to students and get them more involved with the museum, not only on an academic level but also socially.”

The next edition, featuring an “Electro” theme, will be held on Thursday, Apr. 5. The Ringling Underground staff are working with meteorEYES’s Shannon Fortner to plan and coordinate ideas for the function.