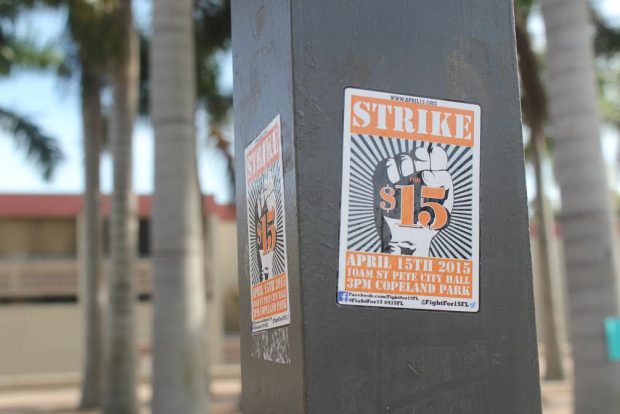 In 2016 America, politically polarized media outlets often parrot the same anti- or pro-raising-the-minimum-wage talking points. Inundated by contrasting opinions, it can be difficult to navigate the issue and decide for oneself whether raising the minimum wage is a good idea, or even a viable one.

The Fight for $15 campaign began in Nov. 2012 with fast-food workers protesting for a $15 minimum wage and union support. At the time, many scoffed at talk of raising the minimum wage that high, but by 2015, some key victories made the Fight for $15 a nationwide effort. It has since become one of the biggest labor protests in decades with a wide spectrum of supporters, from low-wage workers like janitors and nursing home aides to college students and social activists.

So what do proponents of the Fight for $15 initiative have to say? There’s a strong sentiment of being pro-labor, pro-worker, pro-equality and pro-justice. Coupled with Black Lives Matter and environmentalist initiatives, the Fight for $15 feels like part of today’s civil rights movement. Charged language makes the issue about morality more than anything else: “What side are you on: the side of the struggling middle class, or the side of low-paying corporations like McDonalds and Walmart?”

“This fight connects to issues of baseline standard of living and quality of life,” Professor Steve Shipman, Associate Professor of Physical Chemistry at NCF, said through e-mail. “People really should not have to work substantially more than 40 hours per week in order to have secure food, housing, etc. Bosses will tell you there are all sorts of dire consequences to them not having as much power as they do now, in the same way that they resisted the idea of the 40-hour work week, the abolition of child factory labor, the imposition of safety practices in industry, etc. I’m not sure how much real-world weight those arguments should hold given our collective past experience.”

Critics argue that although the movement’s sentiments are valid, a $15 minimum wage is not economically viable. Major concerns include whether an increased minimum wage would hurt small businesses, reduce the overall number of jobs, or shock local economies. Some critics say that individuals protesting for higher wages could be pushing themselves right out of a job.

“This is economic insanity,” Dave Maney, CEO of Deke Digital, said on Fox News in 2015. “It forces labor under the table. It forces automation… That bottom rung of the economic ladder, you’ll saw it right off.”

But for critics concerned that a $15 minimum wage will hurt the job market, Professor of Economics and Chair of the Division of Social Sciences at New College, Richard Coe, says not to worry.

Studies conducted by the Economic Policy Institute (EPI) show that an increase in the minimum wage within the historical range will likely not cause any significant negative impacts on the economy, and may have some positive impacts because it would increase the purchasing power of low-wage workers.

But what about small businesses? Businesses with less than 15 employees like mom-and-pop stores typically have much less monetary flexibility than larger companies, and have a difficult time keeping their businesses afloat as it is. Critics say making small businesses pay employees a $15 minimum wage could cause many of them to fail.

“The fact of the matter is if everybody has to do it, small businesses are not losing a competitive edge,” Coe said. “It does put some upward pressure on prices, so consumers might have to pay a little more, but if the average consumer has to help out the low-income worker, that’s not a problem in my book.”

Another criticism of the Fight for $15 movement is that it may not even be targeting the demographics it claims to be helping the most: minorities and single mothers. Currently, 50% of minimum-wage workers are teenagers. Critics argue that minimum-wage jobs are not meant to support someone’s livelihood – they should be entry level jobs for people under 20 or individuals with limited special skills.

However, proponents of an increase in the minimum wage say that critics are missing the point. According to the EPI, 89.3% of workers that would be affected by an increase in minimum wage to $12 are age 20 and older, 55% work full-time, and more than 25% are parents.

“Right now, 50% of minimum-wage workers are teenagers, but you have to count all those people who are working between $7.25 and $12,” Coe said. “Those aren’t teenagers, those are adults, and they’re all going to get a pay increase. That’s the mistake.”

“I would have a federal minimum wage at about $11 to $12 like it was in 1968 but with a little bump,” Professor Coe suggested. “Index it to inflation and then allow states or municipalities to make any upward adjustment they feel is appropriate.”

“These people are working hard and they’re not earning very much,” Coe said. “If we can funnel some more money their way with virtually no negative impacts on the economy, that’s a huge plus. That’s the moral part.”