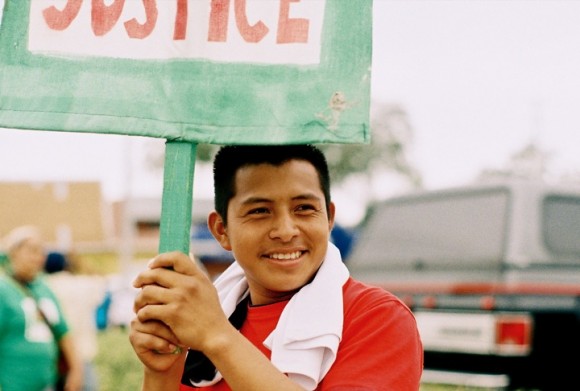 One of the protesters at the Paradise Plaza Publix.

“¡Justicia ahora!” (“Justice now!”) demanded an invigorated mass during an afternoon protest on Sun., Feb. 6 in front of the Paradise Plaza Publix, holding signs rebuking the supermarket chain’s refusal to comply with the fair food standards promoted by the Coalition of Immokalee Workers (CIW). The Coalition has been working since 1993 to improve the working and living conditions of migrant and seasonal workers in south Florida, rallying and lobbying for fair wages, an end to servitude in the fields and the institution and protection of basic human rights.

In the past their efforts have been greatly successful, convincing corporations such as McDonald’s and Sodexo to implement contractual agreements with farm owners that require a certain standard of fair wages and treatment to be upheld on the farms.

Before the CIW came to exist, many workers were trapped, working for paltry wages and forced to pay exorbitant prices in farm-owned housing, sinking ever deeper into debt. Farm workers are not paid by the hour but by the 32-pound bucket — the going rate for which has hovered between 40 and 50 cents since 1980. The CIW gives workers an outlet for organized protest of this treatment.

“You’d be hard pressed to find any other industry where it’s been three decades without a wage increase,” Jordan Buckley, a member of Interfaith Action, one of the volunteer groups CIW relies on along with the Student Farm Worker Alliance, said. They argue that these outdated wages make it impossible for workers to ever come above the poverty line. One of the major changes the CIW is fighting for is “One More Penny Per Pound,” a seemingly minor increase that can almost double wages. 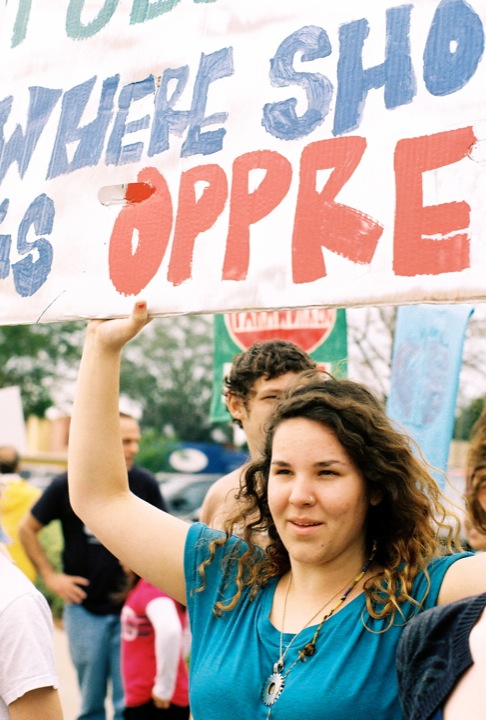 Thesis student Andrea Ortiz has been involved with the CIW for years and is excited about the current campaign. She explained that the CIW has been extraordinarily and uncommonly successful in winning over the business leaders in both the fast food and food service industries, leaving only supermarkets to be convinced of the necessity of fair food policy.

Currently the CIW’s efforts are focused on the supermarket chain Publix. In December, Publix spokesperson Dwaine Stevens replied to this targeting, stating, “If there are some atrocities going on, it’s not our business.” This statement has become a rallying cry for CIW members and supporters, calling for not only recognition of the atrocities at hand, but major action to remedy them. Publix CEO Ed Crenshaw recently reflected on his grandfather’s advice: “don’t let making a profit stand in the way of doing the right thing.”

The CIW has taken it on as their mission to get Publix to follow their own advice. On March 5, a major protest called “Do The Right Thing” will take place in Tampa, the city where half of the Publix executives reside. Protesters will march from three different stores around the city to one central Publix, carrying signs and chanting, as well as operating four giant puppets designed by Art and Revolution, a Bay Area art group. Artists collaborated with workers to imagine four of the major atrocities — sexual harassment, poverty wages, wage theft and scorn — into puppet form. 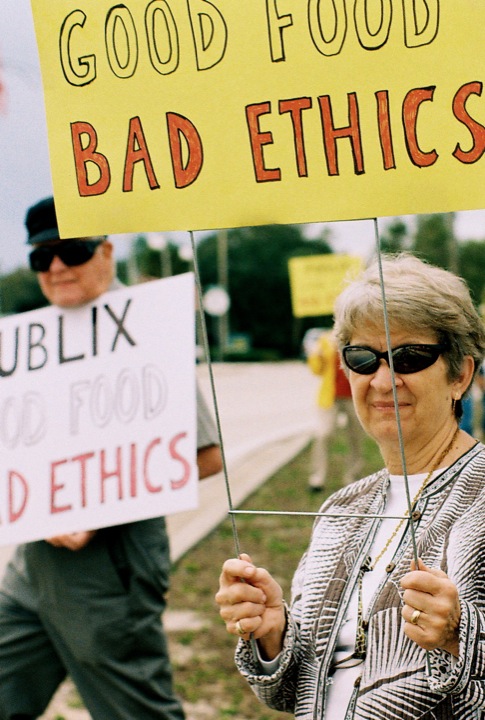 One of the protestors at the Paradise Plaza Publix.

“Through the theatre piece we’re going to show how when people of faith and students come together, we’re actually able to transform these atrocities within the industry into the values that we want to uphold — that we want the industry to represent,” Buckley explained excitedly.

These protests are only one facet of the CIW’s campaign for workers’ rights. Prior to the protest on Feb. 6, the Florida Modern-Day Slave Museum was set up at the First Congregational United Church of Christ. The truck-museum was filled with curious churchgoers rather than students, as it was Fri., Feb. 4 on the New College campus. The mobile museum is designed to both educate and shock visitors by providing an explicit picture of the slavery still going on in this state. The museum itself is a replica of a truck where workers were trapped at night, chained inside without facilities. Seven court cases are detailed in the display, holding recurring stories of extraordinary exploitation, death threats to workers, literal shackling, and company store style forced debt. The CIW has been a crucial player in six of these seven cases, providing outlets for workers’ complaints and investigative aid.

A few blocks away at the First Presbyterian Church, the CIW was connecting with citizens in yet another way as Santiago Perez, a Guatemalan worker, joined Pastor Clay Thomas at the pulpit. The sermon’s theme was justice. A reading from Isaiah 58 called upon people “ […] to loose the bonds of wickedness, to undo the thongs of the yoke, to let the oppressed go free and to break every yoke […].” The pastor launched into a sermon connecting this directive to the mission of the CIW, calling upon the members to help “break the yoke of poverty” in the fields of Florida. 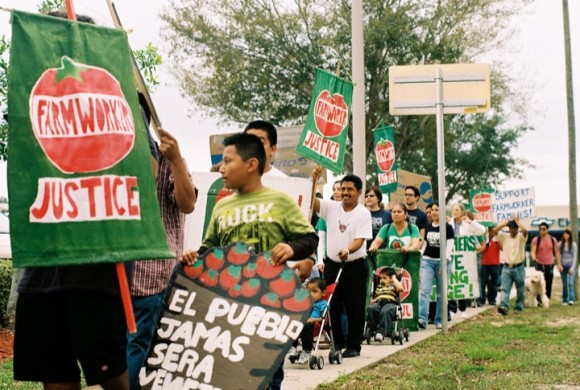 The group of protestors at the Paradise Plaza Publix.

Perez then told his story, translated by Jordan Buckley, explaining to the congregation his life as a farm worker and the great difference the CIW has made. Returning to the scripture he stated that “Isaiah fills me with hope that we can create a better world.”

Pastor Thomas closed by asking, “Do we love enough to struggle for justice?”

Then that afternoon the sidewalk in front of Publix filled with protesters. The turnout was diverse: New College students with their cameras and dreadlocks, toting giant hand-painted signs stood alongside elderly parishioners coming back for yet another CIW event, their sunglasses and equally indignant signs in tow. Busloads of workers from Immokalee arrived, mothers and fathers and tiny children dressed in red and green, reminiscent of the tomatoes in question. Cloth signs fluttered overhead and cans full of coins rattled in the hands of the little ones. Back and forth in front of the supermarket they walked, shouting in alternating Spanish and English. “Up up with the fair food nation, down down with exploitation,” “¡Publix escucha, estamos a la lucha!” (“Publix listen, we are fighting!”). They fight for just one more penny per pound, for protection from enslavement, and for a food industry entirely dedicated to fair food, an industry that has no tolerance for exploitation, an industry in which human rights are upheld at every level.