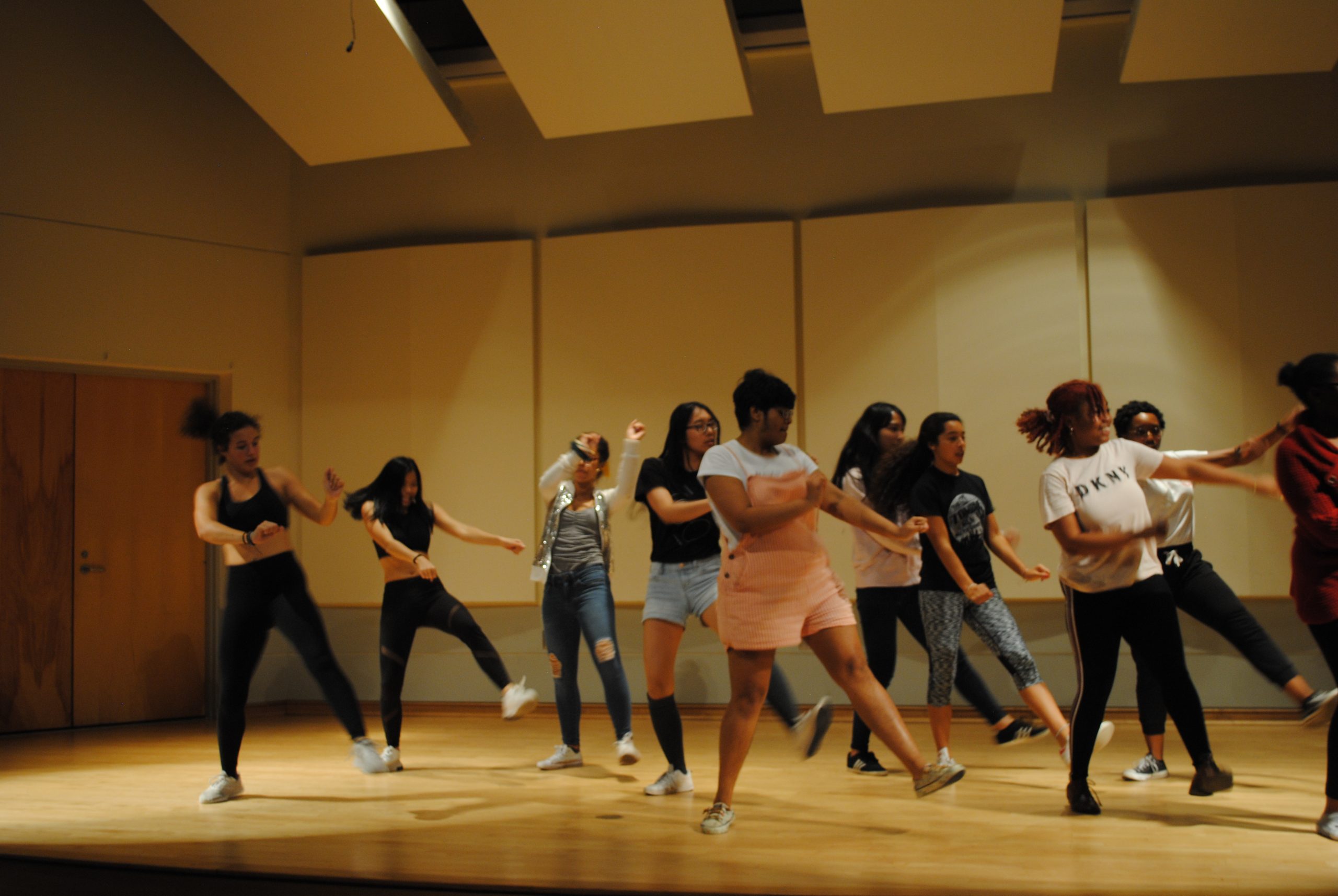 Twice a year, students from Dance Collective showcase a series of choreographies that celebrate the commitment and hard work they dedicated throughout the semester. This past week, Dance Collective held a technical rehearsal in preparation for their live performance happening Dec. 6 and 7 in Sainer Auditorium. Doors will open at 5:30 p.m. and the show will start at 6:00 p.m.

“Dance Collective is a student-run organization and club on campus where we come together at the beginning of the semester and hold an interest meeting,” thesis student Alyssa Borgschulte, who has been involved since her first semester, said. “Anybody can choreograph and anybody can dance.”

The club features a variety of music genres and dance styles. K-pop has become more popular in recent years, but other styles include hip-hop, jazz, contemporary, swing dancing, Irish dancing and hula hoop.

To prepare for the showcase, students practice weekly in the aerobics or yoga room of the Fitness Center. Once students have gotten into the schedule of these weekly meetings, most find they gain more confidence in performing.

“I like watching people grow and have a really good time because some people might not be super comfortable with dancing,” Borgschulte said. “By the end of the semester they are super excited to show how hard they worked. I just love everybody coming together and having a good time.”

“I had never done dancing before I came to college and since it was a club all of my friends were in, that helped me be less shy because I don’t really talk to other people that I don’t know,” thesis student Rain Kwan said. “Now that I’ve been in Dance Collective I’ve become friends with like everyone here.”

Thesis student Kristen Patterson has a similar story: she also lacked dancing experience prior to joining Dance Collective but had been interested in dancing since high school.

“I thought about [dancing] my senior year but never actually went through with it,” Patterson said. “Then I saw Dance Collective my first semester and I was like, ‘I want to join that!’”

Other students come with a background in performance and dancing. Third-year Kendall Southworth has participated in competitive cheerleading for approximately 10 years, but acknowledged a special difference experienced with Dance Collective.

“So I’m used to performing, but at New College it’s a whole different experience,” Southworth said.

Dance Collective can also be an opportunity to manifest creativity and a variety of dance forms. For instance, second-year Antonia Ginsberg-Klemmt introduced hula hoop as part of the choreographies the club showcases.

“It includes dance and prop manipulation, something really beautiful and I’ve created amazing friendships because of that,” Ginsberg-Klemmt said.

Southworth is one of the performers in Ginsberg-Klemmt’s hula hooping routines.

“Being able to flow with a group of powerful, beautiful women that I love and doing something like flow, that I feel is so unique to the New College community, and share our art with other people is really special,” Southworth said.

For others, such as thesis student Salua Rivera, Dance Collective represents something more intimate and meaningful.

“Dance Collective was kind of a way to push myself to new limits and do new things that I’ve never performed before, or maybe not since elementary,” Rivera said. “And it really is a way to connect with my body; to get to know my body and to connect with other amazing beautiful people that inspire me. I’m really grateful to be doing this dance with people that I do admire and appreciate.”

While dancing to perform is the main component of Dance Collective, some students primarily go for exercise or as replacements in case someone cannot make the showcase. Students are welcomed to do what is best for them.

In addition, Dance Collective can count as a tutorial sponsored by Professor of Philosophy April Flakne.

“I know you do a couple dances and you log a journal and that’s about it,” Borgschulte said.

No audition or previous experience is needed. Every semester the members get ready for a new choreography so students can choose from the December or May showcase. Though, Spring semester always include a thesis dance which allows for thesis students to choreograph a separate dance together.

“We always put the [thesis dance] at the end of the show in May so it’s really cute, it’s kind of like celebrating big time,” Borgschulte said.

“I wasn’t a super good dancer [and] I didn’t really like dancing that much, but I got more into it and started choreographing,” said third-year Marcela Prado-Zapata.

This upcoming showcase will include a hula hooping performance for the first time.

Dance Collective is the largest club on campus.

The Fall showcase will premiere over the weekend in the Sainer Auditorium.

An Irish Dance performance will take place in this semester’s showcase.

Some choreographies only consist of a few students while others fill the stage.

As the performers got a feel of dancing on stage, students in the control room played with audio and lighting.

Anyone and everyone is welcomed to join Dance Collective.

Dance Collective has an overall good reputation of creating a judge-free space to dance.