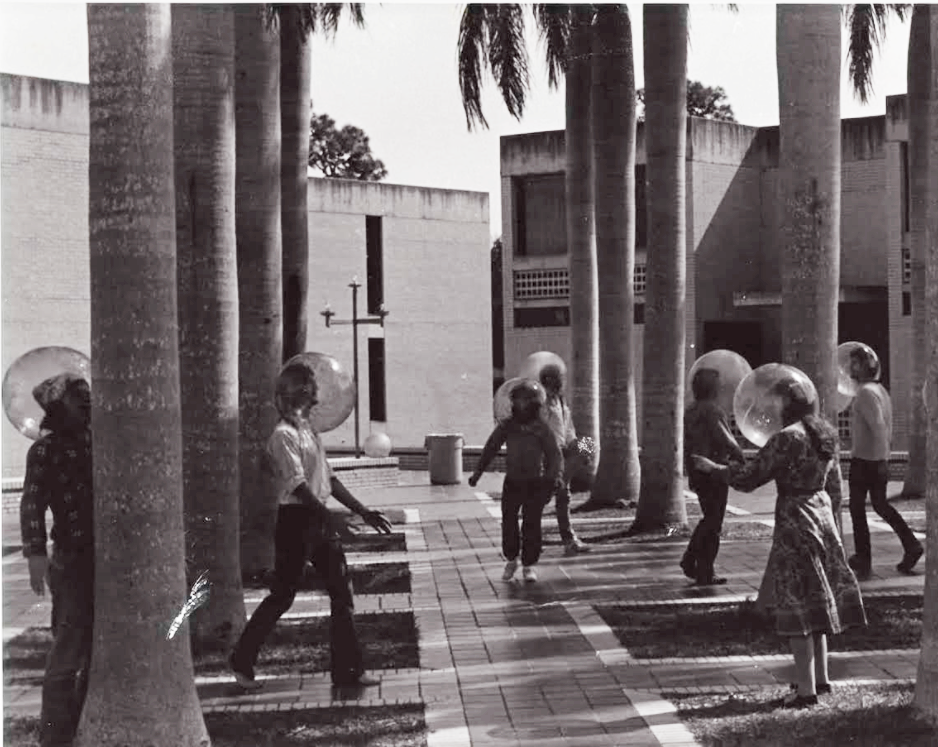 Students wear the coverings of the light fixtures in Palm Court. Posted on the NC(F) Daimon Facebook page. Taken circa 1975.

4,997—that’s the total number of New College of Florida (NCF) alumnae/i on file with the New College Alumnae/i Association (NCAA) as of 2012. That number is staggeringly small compared to some of the state’s larger universities, where a single graduating class may be 5,000 or more students. The simple fact that there are relatively few NCF alumnae/i around the world—perhaps everyone has experienced the thrill of seeing a New College license plate anywhere outside of the Sudakoff parking lot—presents a problem for fostering connections between generations of New College students.

Alum Troy Winfrey (‘87) had lofty intentions when he started a Facebook group in February, 2016 and named it NC(F) Daimon. A “daimon” is a spirit from classical mythology, meant to be a guiding force and a guardian. Winfrey started the group after another online alumnae/i group fractured over whether or not students who had not graduated were “real” alumnae/i. Winfrey wanted to build a more inclusive group in which all members of the NCF community could share resources, connect and look out for each other.

NC(F) Daimon has grown substantially since 2016 and now boasts well over 2,000 members. The group offers a direct line of communication to past NCF students in such diverse fields as child care, scientific research and law. The group also serves as an ever-changing historical record, with alumnae/i and current students frequently posting photos, new and old, and relating stories and memories.

“It’s interesting how the older people are always reminiscing, they post photos asking can anyone identify these people, like we used to be in a band or something,” third-year Evan Teal said. “You can reach out and find people. I wanted to find the founder of the garden, because I’m the Food Forest TA. It’s a really useful tool.”

NC(F) Daimon has proved itself useful to alumnae/i in a wide variety of situations. Sharon Levine (‘97) helped relocate a kitten named Gizmo from Athens, GA to Fort Myers, FL after a request was posted on the page. The group became an important staging ground for Florida-based members during Hurricane Irma, when many used it to post tips for preparation and evacuation. Members frequently consult the group for career advice as well as to drum up support for crowdfunding campaigns.

In the past few months, the page has been abuzz with news of the NCAA’s 2018 Reunion Weekend. The reunion, which is open to all alumnae/i from any cohort, will take place on campus from Feb. 15 to Feb. 18, 2018. Current students are invited to participate in most of the reunion activities, with events such as the Career Panel created specifically with current students and recent graduates in mind.

Winfrey credits the group with promoting a new level of engagement between alumnae/i and the administration, and said that the group led directly to his own decision to join the NCAA Board of Directors. He is enthusiastic about the results of his experiment in creating an informal alumnae/i association and appreciates feedback, positive or negative.

“Many people have left in that traditional New College vehicle, an aggrieved huff, and many have joined. You do what you can. A good number of people find it amusing, heartening, interesting and sometimes very directly useful, and that’s what I’m after. We have helped a lot of people with such matters as jobs, places to live, and legal representation. We have saved at least two lives.” Winfrey said. “Above all else it has made me feel I’m doing something for the community that was such a profound influence on my life.”

Alumnae/i statistics are available at the following link: https://www.ncf.edu/about/consumer-information/student-demographics-and-outcomes/