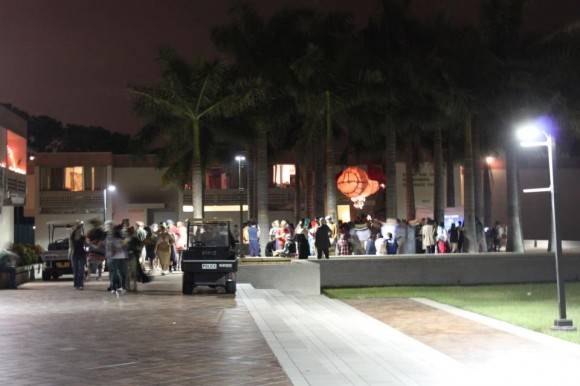 Students enjoying a steampunk-transformed Center of the Universe. They and their guests had to present wristbands to security before being allowed to enter Palm Court.

Rarely does the average New College student, amidst the thrills and excitement of a Palm Court Party (PCP), have safety set as a top priority for the evening. While PCP weekends mean blowing off steam for the student body, campus security gear up for one of their busiest days of the year.

“It puts a bit of strain on [campus police] because it is usually well around a 12-hour day or more,” Lieutenant Michael Kessie said. “It puts a strain on us financially. You know, with the budget the way it is, it’s extra money that right now we’re not billing the students – for extra dispatchers and extra cops – but at some point we might need to look to the students for funding.”

Though the SAC does not pay for the additional dispatcher nor overtime for officers, it does provide approximately $2,500 for four security officers for three PCPs a year. NCF police obtain extra officers from a company headed in Sarasota called “Community Security Services.”

Whilst securing a party of potentially 800 students and a multitude of guests, campus police hire up to 12 additional security officers to station and guard the perimeter of school grounds. With New College’s “open” campus, Kessie explained, one of the NCF police’s main concerns is to keep stragglers from meandering in.

“We really don’t have students inviting guests – it appears – that are getting to be a problem,” Kessie said. “It’s that people just wander on. So we try to keep the perimeter as secure as we can … [we had] three people fighting in Hamilton Center, who didn’t even have any business with the school – they’re just here because there’s a party.”

Because of the small size of the department, campus security cannot afford to have anyone off the clock. Overtime is inevitable for officers during PCP.

“We have to have the maximum amount of officers we can field,” Kessie said. “I think we ended up with … seven to ten hours of overtime of our own and that gets to be pretty costly … of course, we don’t charge the students for the extra overtime, we just kind of eat that.

“It messes up everyone’s schedule pretty much for the whole month,” he continued with a laugh.”If you get weekends off you’re pretty much screwed up.”

Campus police hardly have time to recover from PCP when they have to provide security at close-following events such as the Fun and Fitness Expo, the Clam Bake, brunch on the bay at USF and other on-campus happenings.

“These officers have their lives too, and they get these weekends off and then all of sudden all these events come up,” Kessie said. “But you know, it’s part of the job.”

This Halloween’s Steampunk PCP turned out to be a relatively good one from the security standpoint. “It actually wasn’t too bad a weekend,” Kessie said.

Campus police made only one arrest. At 11:15 p.m. a non-affiliated subject was found sleeping on the East side of campus. Having been trespassed in 2006, he was taken into custody.

“He really had nothing to do with PCP,” Kessie said. “But that’s the kind of guy you could get wandering into the mix and there could be problems.”

Kessie assured the Catalyst that most PCP incidents stemmed from outsiders and non-affiliates. “It’s really not students who are creating the problems,” Kessie said. “Since the additional security has started back in ’06, it’s been a lot quieter. We have had PCPs where nobody’s gone to the hospital [but] we almost always have at least one student who goes to the hospital [for a] drug or alcohol overdose. It’s not uncommon … but we used to have more, it’s calmed down a lot.

“After you’ve worked a whole week of regular work we do the best we can but we’re going make mistakes and there’s going be some room for improvement,” he continued. “It’s running fairly smoothly and certainly much better than it used to. Our primary concern is the safety of the students and property. [We] don’t want to keep anyone out but there have to be some guidelines.”