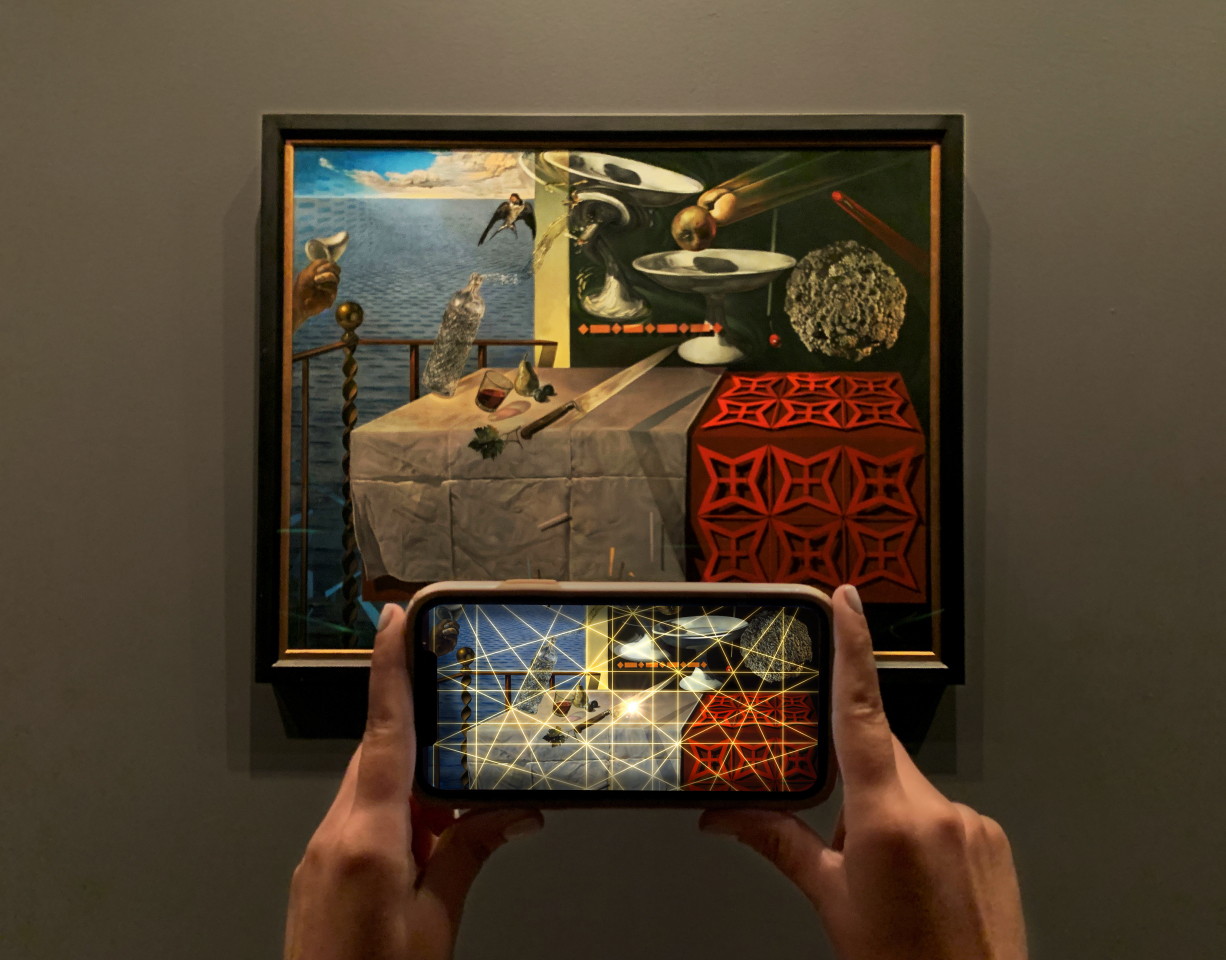 Second year Art student Tara Norton and Catalyst staff writer Adriana Gavilanes entered the dimly lit gallery for Salvador Dalí’s masterworks illuminated by phone screens to explore a new augmented reality (AR) exhibit, entitled “Visual Magic: Dalí’s Masterworks in Augmented Reality”. Other open exhibits feature Dalí’s sculptures and prints from Spanish romantic-era printer and painter Francisco Goya, who inspired Dalí’s work.  This exhibit along with two others will be open to the public until Nov. 3 at the Salvador Dalí Museum of Art in St. Petersburg. Each exhibit brings a different element of Dalí’s life and work, drawing on the themes of Surrealism, Classicism and Catholicism.

This exhibition works in tandem with the free Dali Museum app, available on both Apple and Android smartphones, to bring each painting to life with digital animations. Visitors can focus on specific points of each painting to reveal the picture Dalí curated when creating the work. The new AR feature also shows Dalí’s interpretation of his work.

An additional screen displaying the AR for each piece is next to each painting with a description of the artwork.

“I’m not sure how important downloading the app really was because while it was interactive, if you didn’t want to use [phone] storage, the exhibit had a screen with the augmented reality right next to the piece,” Norton said.

Bronzes from the Vault

The exhibit Bronzes from the Vault opened on June 6 and features the only sculptures Dalí worked on by hand. In addition to the collection of sculptures found in the galleries, there are four large-scale bronzes ranging from six to 10 feet.

The bronzes can be found in the Avant-garden, located at the back of the museum.

“I really appreciate that the Dalí has outdoor art as well,” Norton said. “They have a beautiful landscape area and I’m glad they made use of that. It’s fun to get outside of a cold building and get outside into nature, it ties into the viewing experience.”

Before Dalí: Goya — Visions and Inventions

The museum introduced the “Before Dalí: Goya—Visions and Inventions” exhibit on Sept. 21, showcasing the work of Francisco José de Goya y Lucientes. Goya’s work played a critical role in the development of Dalí’s artistry. Both painters came from Spain and Dalí ultimately felt a profound impact of Goya’s work because his art portrayed issues Dalí had to deal with in their country.

Goya’s paintings and etchings from the late-18th and early-19th centuries are celebrated for revolutionary qualities never seen before in art. The exhibit features two series of first-edition prints and three paintings. The first series of prints, “Los Caprichos”, is a collection of satirical prints about superstitions and social issues of Goya’s era. The second print series, “La Tauromaquia”, depicts the history of bullfighting on the Iberian Peninsula. Both series highlight Goya’s printmaking techniques, regarded as revolutionary back then and today.

“I think seeing the influence Goya had on Dali was super monumental, as with every artist, we don’t live in a vacuum,” Norton said. “Seeing what influenced him at the time really helps you understand the work that he did and the reason he did certain things.”

Of the three exhibits

“The augmented reality exhibit was my favorite exhibit,” Norton said. “Not only did it have such a variety of different artwork but I loved seeing how [Dalí] commented on society.”

Norton added that the aspect of virtual reality was very cool because of its uniqueness, noting that as an avid art museum-goer, this was the first time she had been to an exhibit incorporating AR.

“It gives us a peak of what is to come for the future of art,” Norton said.

Regular admission costs $25 for adults and $18 for students with identification. The price drops to $12 on Thursdays after 5 p.m.