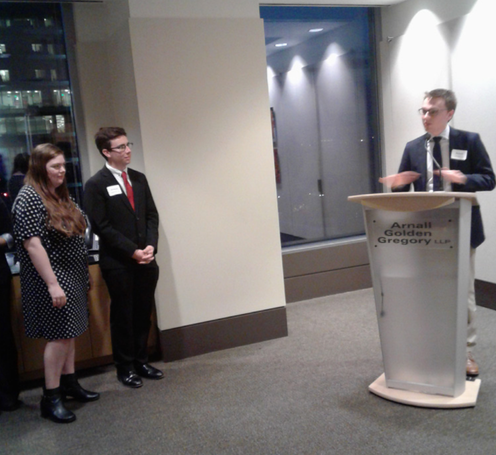 This weekend, the CEO’s Novo Network program brought nine students out of the “New College Bubble” to network with NCF alums in Atlanta, Georgia. However, unlike usual Novo Network events, the trip also featured a Law School Admissions Council (LSAC) forum and focused on helping students interested in law answer a key question before they graduate: “Is law school right for me?”

“This event really helped solidify my decision to go to law school, prior to coming here I wasn’t exactly certain if I wanted to apply, I wanted to use this experience to help me make an informed decision going forward,” thesis student Allya Yourish said. “I really believe after attending the workshops and going and speaking to law school representatives, that this is something I would like to do.”

The trip was separated into two parts. After arriving in Atlanta on the first day, the students visited alum Glenn Hendrix’s (’76) law firm Arnall Golden Gregory, LLP, where Hendrix hosted a gathering of the Atlanta chapter of the New College Alumnae/i Association (NCAA). Students were able to discuss life after New College with many former students who attended before them and have moved onto exciting and successful careers.

“I really valued the opportunity to speak to alums, I get to speak to alums a lot while working for the giving challenge with the foundation, but really having this concentrated time to talk to them about not only their careers but careers their friends and fellow alums have gone on to really helped me get a broader scope for what is possible after New College,” Yourish said. “I got some email addresses and phone numbers for people I’m going to want to talk to about both how they got to where they are today and what I can do to get there as well.”

The following day, students attended the Atlanta LSAC Forum event, where they were able to both participate in a variety of workshops concerning applying to law school and also speak with law school recruiters from across the nation. Representatives from over 185 law schools were in attendance to answer questions and help reinforce students’ interest in law school.

“I learned a lot about international environmental law and climate change cooperation through law, and I found it interesting and I got a bunch of pamphlets from schools,” third-year Lara Herzog said.

However, for some, the trip reaffirmed a different, yet equally important decision regarding graduate school and their future.

“I learned that I don’t want to go to law school after this event, not because it wasn’t an amazing event, it was very eye opening, actually, but just because I realized I don’t want to be an actual practicing lawyer” second-year Angela Duda said. “And meeting alums the day before was really cool.”

The trip was only one of three Novo Network trips the CEO plans each year in cooperation with the NCAA. In addition to Atlanta, students have the opportunity to visit alums in Washington D.C. and New York as they continue to plan for a successful future after New College.

“The Novo Network program really encourages highly motivated students that want to get some experience that you can’t get on campus, in that type of environment, actually going to locations where you may want to work in the future,” Assistant Director of the New College Alumnae Association Glenn van der Molen said. “It’s an opportunity to network and hear from alums who have already been through the journey of using the New College degree and applying it to the real world, so if you think that’s something you’d get a lot out of, the Novo Network program is something you should look into.”