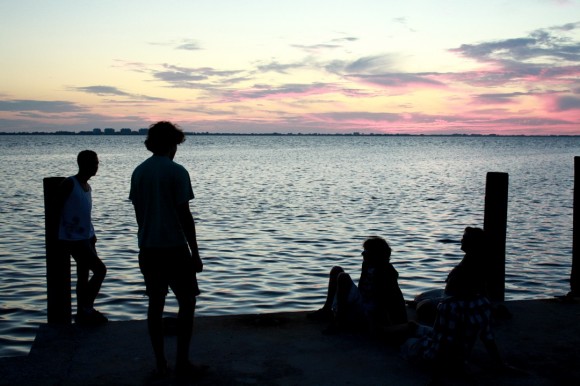 Students take in the sunset during one of the last day of the open dock.

This November, just as the weather takes a turn for the tolerable, campus serenity will be disrupted once again by large metal claws and roaring machinery as the most iconic location on campus, the bay, gets a face lift. For a six-month period, Novocollegians will be barred from the pink palace sunset while the plan initiated in 2006 culminates in the replacement of the historic 80-year-old Ringling seawall.

“All of the wall in front of College Hall, Cook Hall, and the dock will be constructed into the most historically correct, aesthetically pleasing seawall possible,” Assistant Vice President of Academic Affairs and Sea Wall Committee Chair Julie Morris explained. “It will even be fitted with an esplanade along the bay front for better access.”

In August 2010, approximately two weeks after the first-years arrived, the Dock was blocked off with a plastic picket fence, deemed dangerous and structurally unsound for students to parade upon. The present cement dock, established in 1946 by Edith Ringling, will be demolished, along with her granddaughter’s footprints that, according to folklore, were imprinted there. With a large crack fissuring the foundation, there is no hope for salvation.

The Project Fact sheet published in 2006 made explicit the intent to “be consistent with the aesthetic of the historic district” and will “demonstrate the natural aesthetic of the bay shoreline,” which was affirmed by Morris and Jack Whelan, the senior architect and project manager since the project’s first baby steps. In the fact sheet, they seek to maintain not only structural solidarity and historical accuracy, but a healthy native environment similar to what existed before the Ringlings ever settled on the Sarasota Bay. The biggest tangential project to the renovations is the intertidal lagoon being created to help maintain those principles.

. “The lagoon at its deepest point will be three feet,” Whelan explained. “When you’re walking out to the bay from Pritzker you’ll come onto a gently sloping shoreline full of native grasses and vegetation.” Not all of the seawall will be destroyed – the wall following the upper lands north of the dock is less degraded than the sections before the buildings and will continue to exist in segments alternatively with the lagoon.

“We’re hoping that as long as we get the elevations right, and introduce the proper plant material, that nature will take over from there,” Morris said. “It’s restoring the shoreline to how it was before the Ringlings filled it in to create a large unbroken shoreline, designed to accommodate as many native ecosystems as it will allow.”

Currently, according an article from issue X of the 2010 edition of the Catalyst, New College has what is called a “direct discharge” water system, with no treatment system between where the water is collected off the parking lots and deposited into the bay. The lagoon can serve as a water treatment facility, processing runoff water through the lagoon vegetation before moving it on into the bay.

Originally, the Public Educational Capital awarded NCF a $2 million construction budget in 2006, which has since grown to $2.5 million. “[The budget was] earmarked for just this purpose, just for taking care of our seawall,” Whelan said. “Up until this point it’s been years of design and engineering work, applications, permits and such. But now the construction starts in November to hopefully end before graduation in May.”

“During the construction phase there will be trucks hauling dirt out and hauling materials in,” Morris said. “For that six month window the bay front is going to be a construction site.”

Morris acknowledged the deprivation both students and faculty may feel without their bay access, but emphasized the long-term benefits of the plan.  “This is something we’re going to have to live through for six months, but the benefits exceed the negatives as a much improved, more beautiful, and more useable bay front will be welcoming us all next year,” she said.