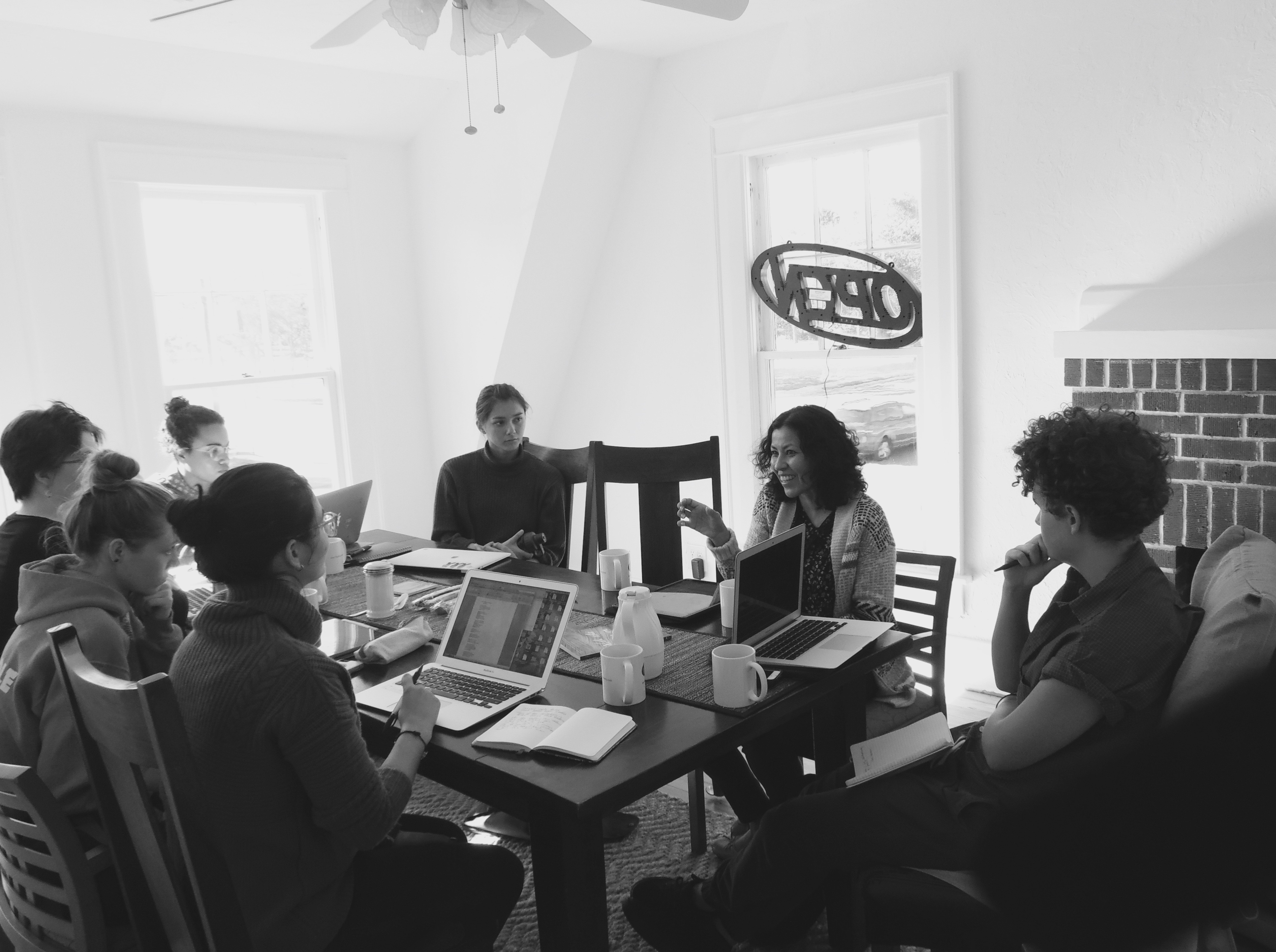 Emmy Perez meets with students from Reggie Young's poetry classes: the Introduction to Creative Writing course and the From Poem to Story to Poem advanced class. Photo courtesy Reggie Young.

Poet Emmy Perez uses language to beautifully describe this terrifying issue, which directly affects her community in the Rio Grande border. Splitting her poetry into two languages like the border wall splits her community, Perez uses words to express her emotions about a wide range of subjects.

On March 16, Perez visited New College and met with creative writing students, in creative writer  Reginold “Reggie” Scott Young’s classes. Then she read her poetry for students and staff at a poetry reading hosted by Young and New College Professor Jose Portugal in College Hall.

“Her poems about the valley life, and the valley landscape have made her an important and very particular voice for that region,” Young said in his introduction at the poetry reading. “[It’s a region] that is currently under a great amount of political unrest […] She also speaks passionately to us in this particular area because of the humanitarian influence that runs through her poems which many of us will be able to identify with.”

“I wasn’t a great college student until I took my first poetry class […] and then I couldn’t take enough creative writing classes, after that I immediately went to graduate school,” Perez said.

“But I was really fortunate, I think, because some people can be creative writers and not need to go to graduate or professional school, but I think I really needed it.”

At the poetry reading, she read poems from her book, With the River on Our Face, as well as some poetry which is yet to be published.

The poems ranged in subject, with the majority being about her border community and her love story with the landscape and the culture. However, some poems focused on her emotions – one that she read turned her love/hate relationship with sadness into poetry.

The reading ended with a discussion on her ability to write in two languages and how her poetry beautifully mixes the two languages at times when there is something that she cannot say in one language.

“I have some friends who are readers and even one who is from Argentina, and she said ‘I speak Spanish but I don’t understand some of your Spanish’ because it’s like names of animals and she said ‘you should probably put a glossary at the end’ and I didn’t want to do it because I think that nowadays you can just go on your phone real fast and just Google it.”

In the future, Perez hopes to take a semester off from teaching and focus on her poetry, as well as get into writing different forms of creative writing, including a possible creative fiction story based on her own experiences in a border community.