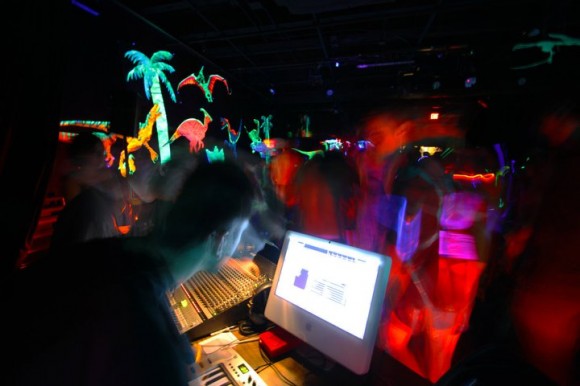 The idea of electronic music as repetitive beats droning out the doors of plastic clubs while shiny-shirted guys give slick eyes on a sticky dance floor, is long past, abandoned in this decade because tracing back through speakers, computers and microphones in this postmodern world there is a new revolution in music happening right now. Electronic music, generally considered so definable, dominates music today like no other genre has before.

Most imagine electronic music synthesized, with a heavy bass and raving techno beats—confined mostly in dance clubs and on the ipods of an eccentric few.  The expanse of electronic music extends far past that definition though, defined as a “type of music in which the sound is produced by electronic means and amplified through speakers,” which means in this electronic world, unless sitting around a campfire singing songs to an acoustic guitar, almost all music is electronic.

“Most things are electronic music, if you use speakers or microphones it is electronic music,” second-year and electronic music enthusiast Michael Floering said in an interview with the Catalyst. Floering just produced an electronic album called See Thangs under the alias Sea Things and is currently in the process of trying to get signed.

“It is self-defining,” future electronic music TA Bryce Bresnan said. “Electronic music is that which is made my by the control of voltages through wire and other apparatus.  But most people don’t consider anything on a speaker as electronic music. It seems that electronic music has a little bit more to do with the intention of synthesizing new sounds from simple beginnings. So it is kind of a gray definition that people manipulate to fit their own conversation.”

Bresnan started his musical career on the piano, going to a high school conservatory for it even. “I played piano classically for 16 years and have always had a sort of aversion to a sort of standard way of doing things, just naturally in my character, so being taught piano classically that long made me seek other things,” he said. “One of the few outlets I had was a keyboard.  It allowed me to play with sounds, allowed me to break away from the monotony of the piano and start breaking into a world of almost infinite possibilities.

“Piano kind of opened up for things for me though—all I was ever to play was the piano being that I only had a set of skills for manipulating a keyboard, which made me feel limited at first. So when I found out that with a keyboard I could manipulate any sound that I can imagine, or can’t imagine, I can do with a piano-player’s skill, my eyes were opened.  So electronic music allows me to make any sound I want, by myself, whenever I want. If I want the sound of a saxophone player I don’t have to hire one, I can simply synthesize it myself. That coupled with the power that electronic music has in modern pop music, the ability to make people dance and so many people enjoy it-that is an extremely alluring aspect of electronic music.  It pulls me towards it as it pulls other people towards it.”

Indeed Electronic music is increasingly prevalent in modern society as so little is done not through a computer or other electronic means. Guitars get plugged into amps, home recordings are made on laptops, there are endless resources all found in what most Americans have sitting on their desk at home. In a world where more people own laptops than acoustic guitars, aspiring artists and curious kids are exploring programs like Garageband and are learning how maybe not to merely create sound, but to manipulate it. Such advances have democratized music creation, leading to a massive increase in the amount of home-produced electronic music available to the general public via the internet.

“With the advent of pirating any competent internet-user can find the most expensive program and largest sample libraries out there for free,” Bresnan said. “That coupled with the massive collection of free tutorials on youtube on how to use all this stuff.  It becomes so inviting for musicians because it is very easy to see how all this music being produced is electronic and it all exists somewhere in digital files you can take apart a lot easier than take apart a video of someone playing guitar. That kind of easy transition into becoming a master musician is very inviting.”

“It is interesting to see that electronic music is actually becoming the folk music of our generation, it is at this moment almost more common in the U.S. for someone in the laptop than a guitar and it is even more common for someone to be able to write impressive of good sounding music on a laptop far faster than they can learn to play guitar. Plus our generation and the one after us spends a lot of time on laptops and computers.”

“Michael Floering and I are working on a project right now to create a themed album where Michael Floering and I dissolve our current personas as human beings and take on a new person where we are both going to be robots from different parts of the galaxy and our music is going to be a massive black hole opening battle where we shoot fractals at each other and trade off dubstep base lines to embody that sort of battle,” Bresnan added excitedly when questioned of his own future in New College.

It is going to be “a dubstep robot battle that makes people hallucinate robots” Floering added when asked about this collaborative piece.

Electronic music is everywhere, on the horizon of the international music scene and also New College’s, with the black box theater or “rave room”, the atmosphere is ripe for the taking. Electronic music does have its problems though and it lies in its availability, which is what also makes is such a convenient artform. “If everyone is writing music all the time how are we going to start distinguishing the best from the best? If everyone is using the same samples, the same programs, will it all start sounding the same?” Said Bresnan as such questions were brought up. “Luckily electronic music offers almost an infinite spectrum of sound, any wave that can ever be created can be created—there is almost no limit, only our ears limit us.”