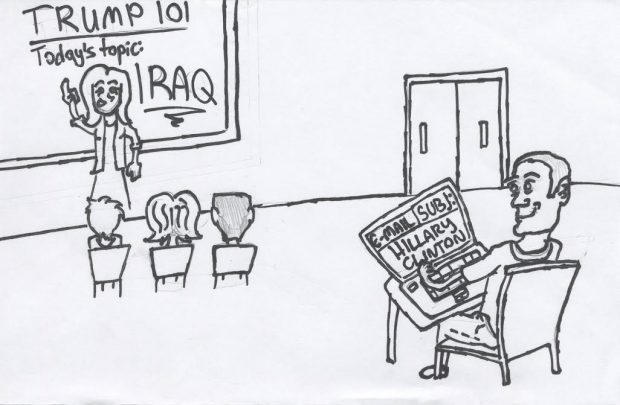 What was supposed to be an opportunity for the Democratic and Republican presidential nominees to show why they deserved to hold the title of Commander-in-Chief ended with widespread dissatisfaction with the entire event. From the early questioning of Clinton about her scandals to NBC host Matt Lauer’s failure to push Trump for substantial answers, neither interview seemed to go anywhere of real worth, or provide anything new or interesting in response to the questions that were asked.

The NBC News and MSNBC Commander-in-Chief Forum was televised live on Wednesday, Sept. 10, as the first joint candidate event of the presidential race. Held before a small live audience made up of service members and veterans – many asking the nominee being interviewed a question of their own – the event provided an intimate space for the presidential nominees to connect to, and win over, service members there and watching on TV. Despite the “joint” nature of the event and the intimacy the event space was supposed to provide, Clinton and Trump were interviewed separately and the disconnect between the candidates and their intended audience was apparent.

Hillary Clinton was interviewed first, but could not help but play defense as both her public record and her scandals were held in question throughout. She went through the usual work of explaining herself, but the distrust within some of the audience member’s questions was clear. The first audience member asked about why she should not be in any trouble for her email scandal, when if he did not follow protocol he would have been “persecuted and imprisoned.” The next audience member to ask a question asked her about if the continuation of her “hawkish foreign policy” should be a cause for concern amongst progressives like herself. Regardless of the line of questioning, her emphasis on the importance of experience was clear from the get-go.

“Steadiness. An absolute rock steadiness, and mixed with strength to be able to make the hard decisions,” Clinton said in response to Lauer’s question of what was the most important factor in being a Commander-in-Chief. “Because I’ve had the unique experience of watching and working with several presidents. And these are not easy decisions.”

Donald Trump’s line of questioning was much less problematic, but the Republican nominee was often without direction in his answers and would frequently go back to discussing Clinton – and Obama – naming one and/or the other 15 times. Lauer was unable to keep him away from discussing them and asked several easy questions, never pushing for a substantial answer and was panned for it across social and professional media.

Not that Lauer needed to dig deep to expose Trump’s own apparent disconnect with the troops. He called the generals of the military in question, supported Vladmir Putin and tried to back up the claim that he had a secret plan that he had to use against ISIS. When Lauer asked him what that plan was, Trump said, “I have a plan. But I want to be — I don’t want to — look. I have a very substantial chance of winning. Make America great again. We’re going to make America great again. I have a substantial chance of winning. If I win, I don’t want to broadcast to the enemy exactly what my plan is.”

Ever since Hillary Clinton was nominated as the Democratic presidential candidate, there have been many conspiracy theorists – and Donald Trump – arguing that Clinton’s health is a serious concern. After a video of her stumbling and falling down while being helped into her van went viral the social media world came alive as those theorists were given credence.

Clinton was attending a ceremony for the 15th anniversary of Sept. 11, when she had to leave early due to being “overheated” according to her campaign. As she was being escorted into the van she appeared to stumble and dip a little before falling even more on the step forward; security helped her into the van as people around came forward to check out what happened. Her doctor said that she is now being treated for pneumonia and dehydration, just hours after her now-viral exit from the ceremony.

Donald Trump, upon being asked about Clinton’s health, hoped for her to get well and promised that he would release the results of his own medical examinations.