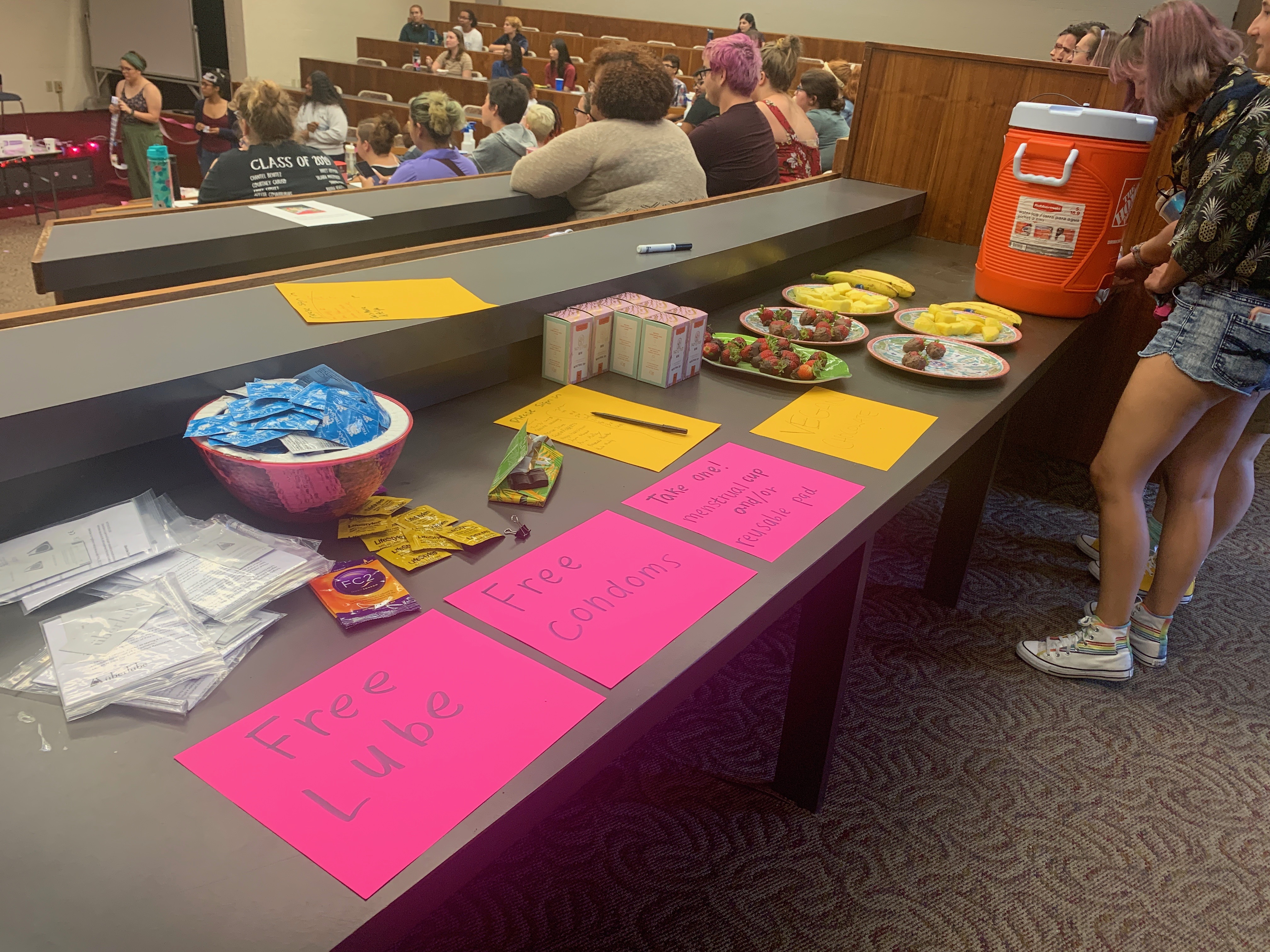 Although sex education is highly debated nationally, discussion of the relevant topics of self worth, honest communication and myths about the body often fail to reach students during the sexually tumultous  times of college. Sex educators on campus refuse to neglect this aspect of the student body’s education and multiple events this semester combat ignorance on health issues.

Robyn Manning-Samuels is the Health Education Coordinator at the Counseling and Wellness Center (CWC). They have no preferred pronouns, a passion for discussing human intimacy and distinct sense of style.

“Being an adult to me means wearing overalls,” Manning-Samuels said in their first speech addressing New College students orientation week.

Many on campus can see themselves in Manning-Samuels, and relatability is a valuable tool when many students receive advice on intimacy for what can possibly be the first time. In their explanations, Manning-Samuels can shift from playful advice on sex etiquette to tackling serious and painful aspects of sex with ease.

On Sept. 16, Consent and Cookies focused on understanding consent and how to approach sex with respect and safety. In an exercise where one partner asks the other to construct their ideal cookie, the concept of consent was applied to a friendly and tasty setting.

On Sept. 27, a sizable crowd of students flocked to HCL 8 to attend RA Loveline. The annual event is a safe and welcoming place for young adults and sex-perts to discuss a major aspect of life and college campuses that is tragically neglected: sex. The audience and panel talked at length about sex with dysphoria, mental illness and trauma while surrounded by a line up of sex toys and vulva posters.

The varied events provided opportunities for students to increase the chances of winning the sex toys, which was an effective strategy of capturing the audience’s attention.

Only two students put tickets in for a fleshlight, but the war for “Le Wand” was a tangible presence in the room. The raffle cup for the vibrating wand overflowed with tickets. The drum roll for the coveted sex toy boomed as nearly every soul in the room rythmically slammed the tables.

When asked about navigating sex while dealing with dysphoria, Manning-Samuels said, “You need to talk about sex in a non sexy environment first. Talk about the types of ways that you envision yourself having sex, the things you may call your genitals. If you aren’t able to have this kind of conversation with the person you’re entrusting to give you a pleasurable sexual exchange, then you should reconsider having sex with them.”

Questions frequently confined to Google Searches and Yahoo! Answers were liberated into a concrete discussion.

Corrado attributed the difficulty in pleasure experienced by many to laziness. Over time the use of toys sets unrealistic expectations for pleasure, but discussion and patience can offset this.

Some trivia questions lightened the mood such as, “Which group records the most orgasms?” The options were straight men, lesbians or gay men.

Two people answered lesbians and the room erupted in laughter after someone answered straight men. When the room learned the correct answer (lesbians), a collective queer pride swelled in the room as people cheered and laughed.

A more grim question on whether Florida requires STI and HIV education in schools followed. People overwhelming answered that no, Florida does not require this education. Students were disappointed when they learned they were correct.

The dangers and social stigma around douching were also covered.

“Many people still douche after unprotected sex but are unaware that it pushes bacteria further up and causes irritation and infections,” Corrado said.

The panelists also discussed the importance of open conversation with gynecologists.

One question silenced the room and the panelists received the full attention of the crowd.

“Sex reminds me of a trauma, what can I do? How do you identify triggers before sex happens?” The panelists provided essential information on how to identify triggers and the typical mindsets that follow sexual trauma.

“The first one is sexual avoidance, often seen more in media, not wanting to interact with sexual parts of yourself,” Corrado said. “The second one is sexual fixation, which is using sex as a coping mechanism. Both of those are completely valid, sometimes these alternate: if there’s something in your head telling you that you can’t have sex in this way or that you have to have sex in this way, that’s an important conversation to have with your partner and yourself.”

An upcoming event on Oct. 9 entitled Sex Education in the Digital Age will be lead by writer, sex educator and podcast host Cameron Glover in ACE lounge at 6:00 p.m. Glover will discuss the empowerment that comes from understanding identity, social justice and sexual experiences.

Manning-Samuels also leads a Sexuality Education and Healthy Relationships support group at 3:30 p.m. each week, for those who are in need of information, support or have an interest in discussing gender, sexuality, social justice and sex education. For any questions regarding sexual education and health, Manning-Samuels can be reached through email or at the CWC.