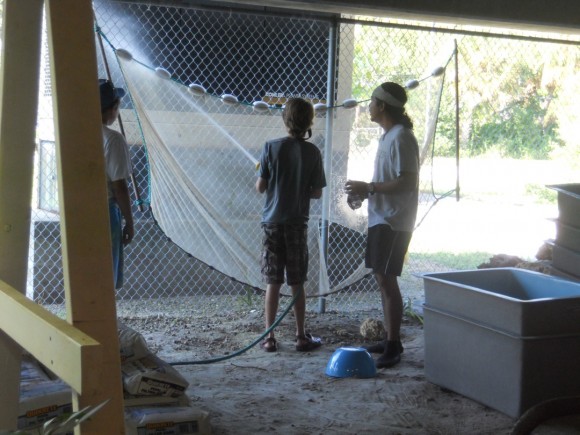 The sound of water filters filled the air as 18 kids stood in a muddled circle and learned how to gradually change the temperature of a tank so that the organisms they just collected could be transfered and would not die. Teaching Assistants (TAs) Avery Thomson and Alberto Fenix scurried around making sure everything was running smoothly. “When you’re good at this you don’t need a thermometer,” Professor of Biology Leo Demski said to the class. “It’s like a green thumb for a gardener.” This Marine Biology class, along with three other classes taught by New College professors, is a part of the Duke University’s Talent Identification Program (TIP) scholar weekend.

The Duke TIP scholar weekend is hosted by New College and universities across the country. Since fall 2003 New College has taken part in the program that occurs every semester. The relationship began when the college was asked to be a satellite site for Duke’s 7th grade recognition ceremonies that celebrate 7th graders who did well on the SAT. At the ceremony, the 7th graders receive a medallion from Duke, a handshake from the New College president and information about other Duke TIP programs.

Demski has been involved with the program at New College since its beginning. He got started with it partly because his daughter used to be a TIP scholar. “It’s fun and my daughter was in a TIP summer psychology class,” said Demski. “It has an effect on people. She was a student here, was a psychology major, has a masters in counseling psychology and works in prisons. It changes people. That’s the main reason I do it.”

At New College, the program is self-sustaining. The money earned from the $10 application and $360-$425 tuition fees provides meals, materials and housing for the overnight students. The faculty, TAs, and Residential Advisors, who stay overnight at the hotel with the students, are all compensated for their time.

The classes offered this fall were the Psychology of Happiness by Professor of Psychology Steven Graham, Economics 101 by Professor of Economics Tarron Khemraj, 1066 and All That: the Norman Conquest of England by Professor of History Carrie Beneš and Marine Biology of Sarasota’s Bay Shore by Demski. There used to be a competition among the professors over which classes would be selected, but now they submit a proposal to be considered.

“We’ve realized that some courses don’t work well in two days.” said Special Projects Coordinator for the Office of the President and Site and Registration Coordinator for Duke TIPS Scholar Weekend Courtney Babiarz. “We want to branch out and have new offerings,”  Last spring, Assistant Director of the Writing Resource Center Alexis Orgera taught a course on flash fiction and prose poems.

“One of the things that keeps Duke TIP successful in the eyes of Duke TIP, New College and parents is that it’s an intense program but very individual,” continued Babiarz. “Each student gets attention and personal interaction with not only the TA but also a faculty member who has reached the top of their academic ladder.”

New College is the only TIP site in Florida and one of the schools that uses only regular faculty members to teach the courses. Many classes at other institutions are taught by graduate assistants, visiting professors, Ph.D. candidates or teachers from other high schools.

“It’s really important to New College’s mission that these students get the same type of interaction with these faculty members as they would if they were coming to college here,” said Babiarz. “I think that’s why we have such high rate of return with students. We consistently have students who apply and apply again. Now I know the students. I know their parents. I can ask them how their dog is doing.”

The biggest problem that Babiarz and Suzanne Janney, Special Assistant to the President and Director of Duke TIP Programs at New College of Florida, have found with the program is the age range. It was first created for 9th-11th grader and now the majority of students are 8th and 9th graders. Of the 66 students who participated last weekend, 5 were 10th and 11th graders. According to Janney, sometimes the 11th graders are encouraged to act as junior TAs.

Demski’s class participated in activities including collecting organisms in the Sarasota Bay, performing water chemistry tests on samples from the bay, recording the color patterns and interesting behavior of the organisms and participating in a presentation with the other classes in College Hall.

“Afterward the kids come here and they want to show their parents, guardian, friends, grandma or whoever is with them what they did,” Demski concluded.