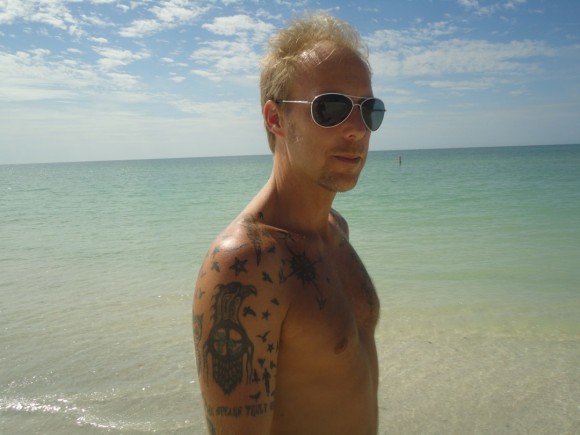 Faries wrote one chapter of his memoir from the point of view of a hamster as a way for him to tell a “pathetic, cute story,” while avoiding an over-sentimental tone, he said.

He scored pot brownies and brownie points with strippers at his mother’s house party, developed a sexual but tender relationship with Barbie and witnessed violence, racism and sex all at age five.

It belongs to Chad Faries, who came to Sarasota’s Bookstore1 on Oct. 26 to give a public reading from his recently published memoir, Drive Me Out of My Mind: 24 Houses in 10 Years and to talk to New College students about writing memoirs. Faries, originally a poet, had given a reading at New College last spring with an invitation by former adjunct professor of creative writing Adam Davies.

Drive Me Out of My Mind tells the story of Faries from infancy to age 10. It shows how this child of the ’70s was reared and sometimes neglected by his young mother, grandmother and three aunts, all free-spirited women, while moving around constantly, living in 24 houses in the span of a decade.

The Catalyst caught up with Faries on a windy day at Lido Beach to talk about his memoir.

What is the story you are trying to tell?

I know it sounds really cliché, but I think it is a story of survival … an explanation of “making it.” But how these characters make it is not very traditional. For example, all the characters are doing a lot of drugs, their parenting skills aren’t that great and they’re just trying to sort of get by. And ultimately, at the end of the book, it’s not like the mother has gone to treatment and she’s gotten cleaned up and she got a great job and she got educated … but she somehow found a way to survive given what she’s dealing with: living in the Upper Peninsula [of Michigan], still trying to manage smoking marijuana, drinking, being in a dysfunctional family, having somewhat of a troubled past. And so these people are still surviving and are still, for the most part, happy and in love with one another. And me, who’s a product of that, ended up just fine, right? So I guess it’s the story of how you can be from a family like that and end up just fine.

What issues do you deal with in your memoir?

I challenge so many things: innocence, an exploration of innocence. Are children accountable for some of the things that they do? Are adults accountable for some of the things that they do? Are adults really different than just big children? Power as well – my book is very matriarchal, from the get-go I talk about how powerful women were in rearing me and the insignificance of men, at least in my life. And there’s men asserting dominance over women, but these women too have incredible amounts of power over the men … so all of these sorts of traditional things are blurred a bit too. And literally everything is blur because of this cloud of drugs and addiction, so another exploration is obviously addiction and recovery the possibilities of that. I think that there’s bit of an exploration of faith and spirituality and how that works into making your life better.

[Also,] this concept of sort of a nomadic lifestyle and moving and moving and trying to create a sense of home. Is home a state of mind, is it a physical place? Additionally, I just wanted to contextualize this decade from the point of view of a child. We hear a lot about the ’70s and that’s mostly from people who lived it as teenagers and adults, but you don’t get to know how a child was perceiving … all of this lovemaking and drugs and politics and war … that was going on. What does any of that mean to a child?

For the earlier years — age one, age two — how much of that is based on talking to family members?

Well it’s all based on hearing about what happened, I didn’t formally talk with the family members …. Those memories were reconstructed just based on what I remember people talking about when I was a child, fragments of things that I remember – smells, colors, impressions of houses.

When I was writing those early chapters, I was living in Budapest and I wanted to somehow get an idea of how a one-year-old sees things and might perceive things … and what I came up with is it was almost just like they were on psychedelic drugs all the time, they’re just wondering at sounds and at colors …. That’s why some of [the narration] is kind of fantastic, magical.

What are your thoughts on truth and exaggeration in memoir?

I don’t necessarily believe in embellishing and adding things in the service of creating drama that was never there to begin with, because I think that that’s falsely manipulating the audience. I’m not really into that. I think that a writer can have an open dialogue and discussion, especially through memoir, with the audience. It can embedded in the narrative itself. If you’re gonna tell a fantastic story you can give hints to the reader that okay, we’re going to this fantastic place now or we’re going to tell this fantastic story that didn’t really happen. So there are lots of moments of that in my memoir, partly because a lot of people are doing drugs and partly because that’s the nature of a child’s imagination. I mean you have child narrator recollecting things, some of that’s going to be fantastic.

What is your advice for young writers?

I’ll give you the generic one and the poetic one. The generic one is what a lot of writers will say and that’s, “Write. Just write.” That’s my advice, write a lot, read a lot. But then my other advice has nothing to do with writing and that is, go to the water, go somewhere where there’s a lot of birds and run at the birds as fast as you can. And as they lift off, you have to … observe the birds and watch them lift off and as you start looking up and see them ascend, pretty soon you’ll lose sight of the horizon and all you’ll see is these birds in the sky and you will feel like you’re flying. And that’s what writers should do, experience that sensation and everything will be clear as mud.