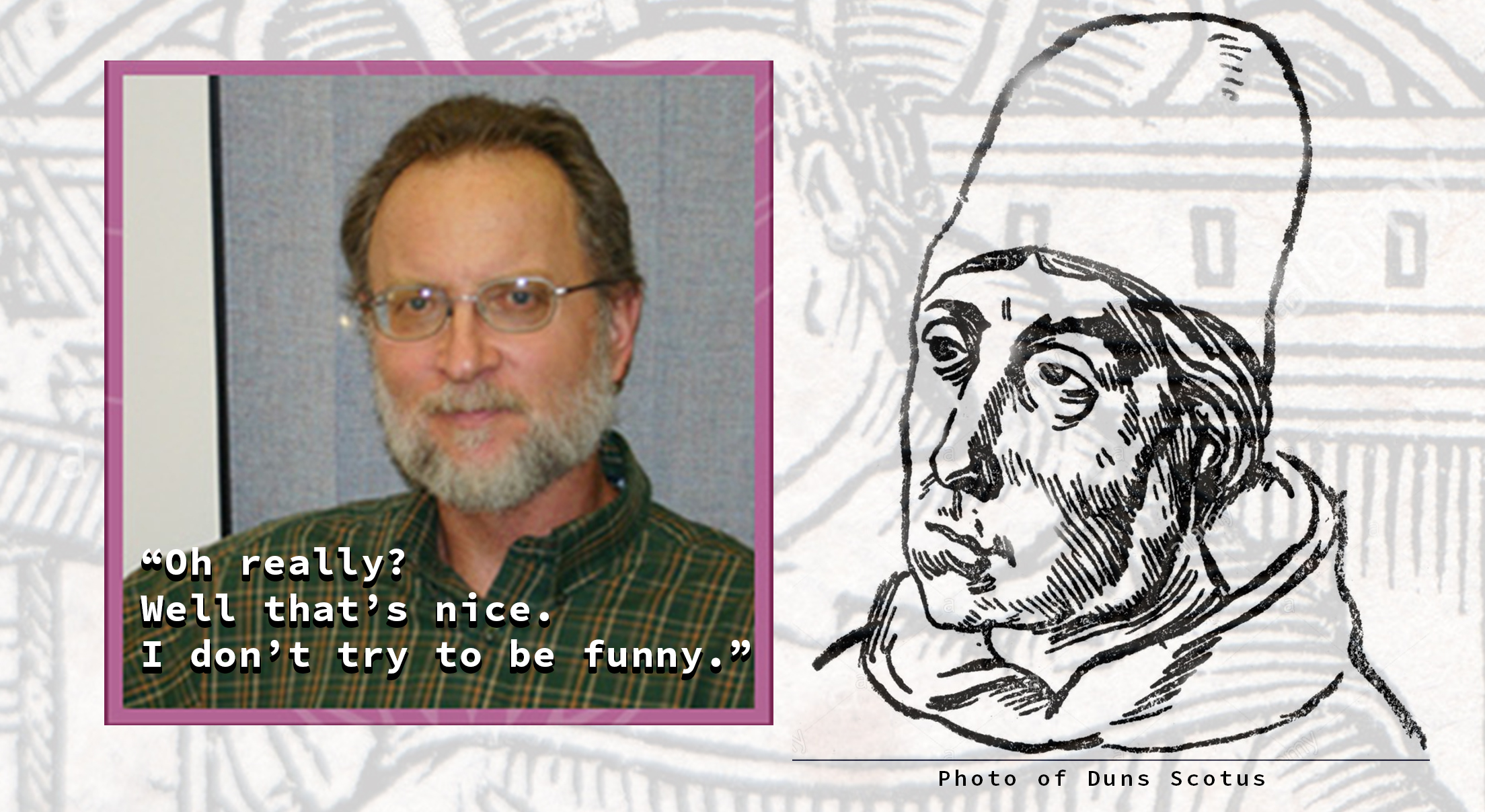 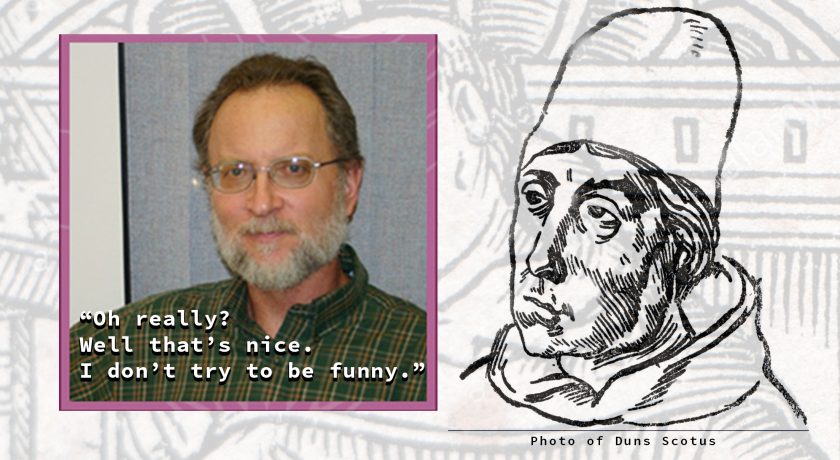 For religion students at the New College of Florida and potentially all disciplines on the tightly-knit New College campus, the circle of professors you work with is small. Religion houses Professor Marks, Professor [Manu] Lopez-Zafra, Professor Michalson and Professor Langston. Douglas Langston is one of the longest standing faculty on the New College campus. He teaches both Religion and Philosophy and will soon be retiring and entering into emeritus, meaning that he will be retired but will remain distinguished and honored, continuing to exercise some of his former duties. As a way to recognize and thank him for his years of service we honor him in this issue of the Tangent as an honorary Wizard. [We also recognize his dear relationship with Glenn Cuomo and express our gratitude towards him as he enters into the next chapter of his life.]

BN: Are you a tea or a coffee guy?
DL: Both. The caffeine seems important for me to keep going. I drink a couple cups of coffee in the morning and then I drink tea sort of throughout the day. Normally around noon or thereabout I’ll have another cup of coffee. On a day like this it’s hard to do that, because I’m teaching in the morning and in the afternoon. Thursday is a hectic day for me.

BN: When did you start working at New College?

DL: Hmm that’s an awfully good question. 1978. Or ‘77. I honestly can’t remember. I had degrees in both Philosophy and Religion and someone–a person named Jim Moseley from the distant past–was at Princeton. He just sort of thought what Princeton offered would work well at New College. When this job became open he communicated with Princeton and sort of said, ‘Who do you have?’ I was pursuing philosophy though I was at the point of doing a religion dissertation. I have two Ph.Ds. So long story short I was able to get degrees in both. I got my Ph.D in philosophy at  U.C. Irvine and then the degree in Religion at Princeton. Where I met [Gordon “Mike”] Michalson, we were in the same Cohort. I’ve known Mike for years and years. I do essentially history of philosophy, particularly medieval philosophy. It’s pretty common for people in that field to have two Ph.Ds—Philosophy and Religion.

B: They go hand in hand…

L: In the medieval period there was such a blend in philosophy of religion, that you know you really need to have both.

B: To have a fully encompassing view of what’s going on right? What drew you to Philosophy?

L: Actually, while I was an undergraduate at Stanford…

L: Yeah, whatever. So I did a double major in Philosophy and English. Then when I was thinking about graduate school I thought about doing the Ph.D in religion and kept getting drawn back to philosophy. 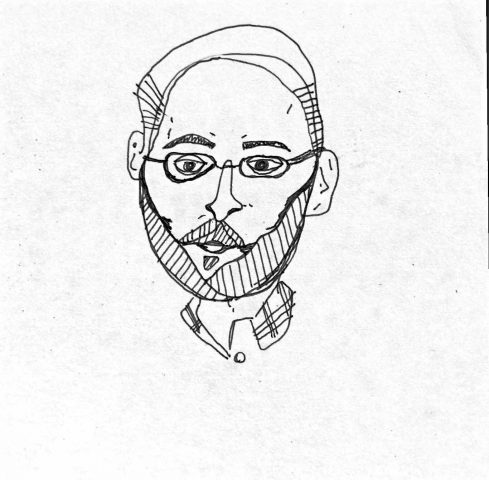 B: So how long have you been working here?

B: 40 years! So are you one of the longest standing members here?

L: Well, Malena Carrasco, we both came in at the same time, 40 years, well really she came in a semester before I was here. So yes, 40 years. I’ve done different stuff, I was away, I was a Mellon fellow at Harvard for a year. I was the interim Dean and Warden for a while, I was Dean of the library for a year.

B: Here, at this school?

L: Yes, all that stuff. There’s just a bunch of stuff I’ve done. I was chairman of the Humanities for a while. You know I’ve just done a lot of different stuff.

B: Was there any specific philosopher or thinker that led you into Philosophy?

L: I’ve been fascinated by the person I work on a lot, Duns Scotus. He was a medieval philosopher, I read him as an undergrad and didn’t really understand what was going on and that sort of made me want to figure out what he was talking about. I’ve published a couple of books on him and a number of articles.

BN: What are you most looking forward to in retirement?
DL: So we… we have a horse. We live with a horse. So we have a horse, we used to have two horses but one of them died. And Cruiser–that’s the horses name–is continuing to live. So he’s a lot of work. Getting hay, feeding him. All sorts of stuff. And then we’ve got two dogs.
BN: What are their names?
DL: Archie and Luke. My wife usually walks them, I walk them at least a couple of times a week. They’re sweet dogs. There is just a lot of stuff. Over the years different things I should be doing with the house. Replacing some faucets and different things. I tend to like to do that work myself. That’s my blue collar background. Do stuff on my own. There’s just a lot of stuff I need to catch up on. People keep asking me what I’m gonna do immediately. First of all I’m just gonna sort of chill out. Sleep a little more. Stuff like that. Do some volunteering. I volunteered at the food pantry, my wife and I did at the same time and we found it fulfilling. I’ll have time to read. When I’m teaching it’s very difficult to read for pleasure.

B: Are there any folks on Campus that you’re really gonna miss? Other than Michalson, or maybe just Michalson?

L: Well certainly all my colleagues. As I understand it, I’ve been made emeritus so I’ll still sort of be around though I won’t have an office. In fact I’m starting to get rid of books, I  gave a bunch to the library yesterday.

L: Well I’ve got a bunch of people

B: On the waitlist?

L: Yes, who want to get things and what not. So at some point… But if you want you can have a copy of…

B: Your book? I would love a copy of your book! Will you sign it for me though?

L: Well, they sort of came up with it. I just sort of accepted it.

L: If other people want copies then, you know…

B: I think they would! A lot of students talk highly of you, a lot of them think you’re really a funny guy.

B: You are funny! I remember sitting in on your class.

B: Do you think you have a good sense of humor?

L: I do! I think it’s… I appreciate absurdity. Right? I notice things that other people don’t notice. I come from a working class background, my father was a carpenter, my mother was a homemaker. So I sort of grew up with an access to the trades and other stuff that most academics don’t have. So I find humor in a lot of different things.

B: Back to who you’re close with, anyone in particular?

B: It was hard to hear of his passing.

L: Yes, right. In fact, this is part of the reason I’m retiring. That it’s sort of… Besides Glenn, there was another friend… You just sort of say, life is short. If you can sort of retire and you know, I’m 67.

L: I mean I feel old, to tell the truth. You know I just sort of see, I can see my intellectual abilities, not as sharp as they used to be. I can say, my mother died from Alzheimer’s and so I sort of kinda wonder about that and sort of enjoy life. And you know, I’m married.

B: No way! You guys are a New College family. What do you like to do on your spare time? What are your hobbies?

L: I sort of like all kinds of movies. Westerns are fine. I tend to think about classic films like “High Noon,” “Treasure Sierra Madre,” and other things. You know, I just saw a film called “Three Billboards Outside Ebbing, Missouri” at the Parkway cinema.

BN: Really? You liked it a lot?
DL: It’s nominated for a lot of awards and things like that. It’s really excellent.
BN: I’m really into film as well and I’ve never heard of that.
DL: I like a lot of different films. Believe it or not I’m a fan of Cosmic Clowns from Outer Space and this was an old silly film, that was ridiculous. So. I like films a lot. I used to play softball, but I’ve given it up. About 2–maybe at this point–3 years ago. Cause I was just getting too old and too slow. I was never really good. It was fun and the activity was great, the comradery was wonderful. But I just reached a point.
BN: I know you like going to the gym. Because I see you at the gym.
DL: I go to the gym. Just to keep the body going.
BN: You go pretty hard in the gym, compared to most people.
DL: Oh really?
BN: Compared to most students even…
DL: Oh. Yeah.
BN: Yeah…
DL: Well it just keeps me going. So part of the deal is… I had back surgery 15 years ago or something like that so if I don’t exercise then you know things kind of freeze up. You know if you retire you want to have health and be able to function.