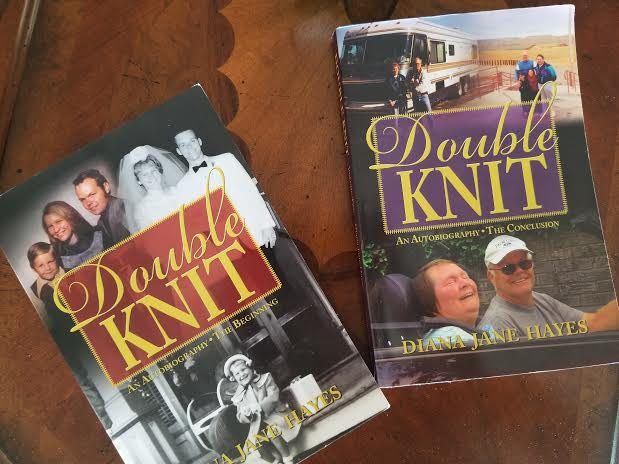 During my recent trip to Hendersonville, North Carolina, I had a chance to sit down with Double Knit author Diana Jane Hayes, and her partner and caregiver, Chuck Hayes. The Double Knit books are autobiographies that chronicle Diana’s life and how she has faced and made the best of challenges such as being diagnosed with Multiple Sclerosis (MS). MS has rendered Diana quadriplegic, so to write the Double Knit books, Diana talked into her computer for about ten-and-a-half hours a day for several years.

Although, much like my conversation with the Hayes, the books were not centered around the life changing diagnosis, but rather her reflections on life from childhood to present day. Following is their direct perspectives on the questions I raised about their experiences.

Why North Carolina? What brought you to Hendersonville?

D: “I was actually born in Pennsylvania, and then moved to New York five days later, and was there for 17 years. Then I went to college in Boston, we married after that, and then lived in Connecticut when we had our son, Lee. Chuck and I divorced in 1980, he moved to Minnesota with his second wife, and I lived in New Hampshire with our son. After he divorced again, Chuck moved out to Asheville because he told his dad he wanted to move south but likes the four seasons and his dad suggested it. He stayed with some friends while trying to decide whether he wanted to live here.

Then Lee got us back together by giving me airline tickets and keeping it a secret that we were going to Asheville to see Chuck.

Shortly after I found out I had MS, Chuck said that he wanted to stay with me, I said I wanted to travel while I still can. We got a mobile home and took our grandchildren, when they were eight and ten years old to study several different national park services across the country. They swam in both the Pacific and Atlantic oceans, saw snow in July at Blackview Mountain in Oregon, and worked with park rangers and were tested on what they learned. After the trip, I did a photo album for it and a scrap album for the awards they got from the studying the parks.”

In your book, you brought up your father’s passing when you were in high school, how do you believe that impacted you?

D: “My father passed two years before I graduated, and after graduation I took a trip around the world. He had worked for an air conditioning company called Carrier Corporation, he was the Comptroller and had five offices around the world, he was always travelling and was this big, 6’4” guy that stuck out, especially when he went to Japan. So when my mom and I went on this trip we got the red carpet treatment from the people that knew him. From travelling after high school I gained perspective on how fortunate I was.”

What role does your community and friendships play in your life?

C: “Diana was always shy, even as a little girl. She opened up more after we got back together and travelled around in the motor home. Now we keep a sign at the end of the driveway that says “Private Drive, Please Come Up to Enjoy the View” and when people come up I will greet them, and bring them in to meet Diana. Sometimes we will sit out on the porch and chat for a bit. One time this couple actually sat down with their kids at our picnic table out there and when we told them that they were the first to ever do that, they told us that they were there to show their kids the spot where they got engaged. It is a neat way to meet people, and sometimes we will get things like thank you notes and gifts in the mail”

What was your main purpose for writing the Double Knit books?

D: “My granddaughter, Lynnze, said both to me and her other grandmother that we had so many stories that we should write a book. Her other grandmother started it, sending pages and saying I should add on, so I added on and sent it back, and she did not add to it again. I decided to continue writing because I wanted my grandchildren to know that I was not always in a wheelchair. I want them to know some of the people they have not known… Like leaving a legacy behind for future great grandchildren, great great grandchildren, and so on.”

Is there anything you were hoping that I would convey in this article?

D: “It’s the places and people you remember.”

C: “No matter what your condition is, or your health is, your ability or disability, don’t let it bar you from enjoying life.”

From talking to the Hayes, one gets a real sense of love, for one another, for their community and for sharing with people. They were very welcoming, and forthcoming with their stories. Chuck and Diana simply demonstrate the human experience as told by two who have been presented with a difficult situation, yet make the most of everything in their lives, and are openhearted to others.

Both of the Double Knit books can be purchased on Amazon.