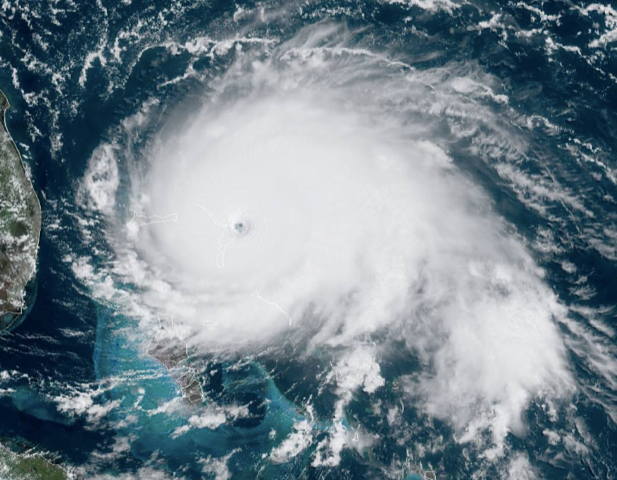 New College is still standing in one piece at the end of the first couple weeks of classes after Hurricane Dorian threatened the new semester with force gusts, torrential rains and flooding while migrating up the east coast. The storm that devastated the Bahamas skirted around Florida sparing the campus trees (and Bon House) this time, but not without the school finding itself amid a chaotic climate as Dorian evolved from a tropical storm to a category five hurricane while approaching the state. Classes were canceled for two days and some students fled the area as the school prepared for this year’s hurricane, waiting in suspense to determine how the storm would affect Florida.

The Office of Communications began sending daily email updates about the storm on Tuesday, Aug. 27 as part of the school’s standard procedure for handling hurricane situations. The initial email acknowledged the potential danger of what was then a tropical storm. Within two days of administration monitoring the storm—and students monitoring the email updates—Dorian strengthened to a hurricane, which resulted in announcements that cancelled classes the following Tuesday and Wednesday.

The email updates also carried a stronger emphasis for students, faculty and staff to adequately prepare for the storm. The Office of Communications provided daily updates for one week until Hurricane Dorian was reported as a category two storm moving toward the Atlantic Coast and no longer an imminent threat to the campus.

“Hurricane Dorian has been a challenging storm in that its anticipated track kept changing,” Director of Marketing and Communications Ann Comer-Woods said in an email interview. “Initially it appeared that the entire state of Florida was going to be affected by it, but then the track changed and it moved further north,” Comer-Woods said. “Because of the Labor Day Weekend, we also felt it was important to communicate with students, faculty and staff last Friday that classes were being cancelled [Tuesday] and [Wednesday].”

Standardized procedures for handling storms on campus have existed, as hurricanes are no stranger to a school on the coast of Florida. However, the headache that was Hurricane Irma in 2016 prompted New College to refine its procedures for overseeing campus safety during storms.

Notably, the Academic Center (or “ACE”) is no longer a designated hurricane shelter for students, staff and faculty after Hurricane Irma proved that the building was inadequate for providing proper resources during a storm emergency. Instead, those needing shelter in the case of an evacuation for Dorian would be redirected to community centers. The email update announcing this change in evacuation procedures ensured that service and emotional support animals would be allowed in the shelters and transportation would be provided to anybody in need.

Information on the storm’s status and corresponding administrative responses are sent to students, faculty and staff after an emergency operations team discusses the potential threat to the school, wherein the group of senior leaders then decide whether to cancel classes, close the college or evacuate the campus.

“We recognized that we do not have buildings on campus that are suitable for sheltering in place for several days in the wake of a hurricane,” Comer-Woods said. “During Irma, some students stayed in the ACE Building, which proved problematic because it lacks a kitchen, back-up energy supply, shower facilities and other necessary emergency supplies. That’s why we were prepared, if it had been necessary, to have New College staff accompany students to local evacuation shelters in Sarasota and Manatee Counties.”

The campus braced for the hurricane, stocked up on water and wrestled for gas. Nevertheless, Hurricane Dorian proved to be a passing threat with blue skies in Sarasota the days of canceled classes.

“As we saw with Dorian, hurricanes can be unpredictable,” Comer-Woods shared. “We have to make decisions well in advance of a storm’s potential impact that ensure the safety of our entire community. While we are fortunate that Dorian did not impact Sarasota, we recognize that students’ families live in areas affected by the hurricane. Please let us know if there is anything we can do to help.”

Look out for next week’s Catalyst article for information about the tragedy in the Bahamas from Hurricane Dorian and how you can help.