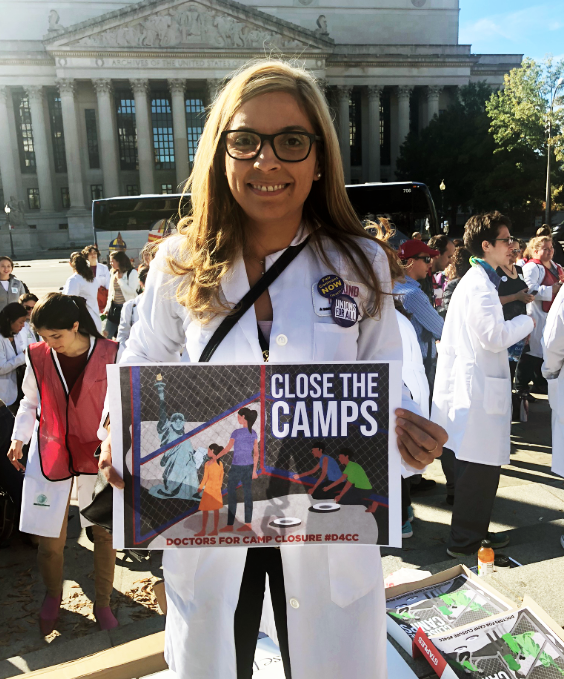 This local DC physican was heavily involved in advocating for pro-immigration policies.

On Saturday, Oct. 19, Doctors for Camp Closure (D4CC) held a rally in the U.S. Navy Memorial Plaza, mere blocks from the White House. This rally turned out nearly a hundred physicians, students, reporters and local activists, all ready to challenge the actions of the current presidential administration’s immigration policies.

D4CC represents a group of “physicians coming together to fight the human rights violations against asylum seekers and immigrants coming to the US,” according to their official website. They recognize that every person, regardless of their immigration status, has a right to sufficient care. In migrant camps that hold extreme overcrowding issues and inhumane conditions, this right is unable to be met and has put these individuals at unnaturally high risk for illness and death.

D4CC works to defend the rights of these individuals not only through traditional activism, but also through the structured work of a legislative action team, a logistics team and a legal team.

At the rally on Pennsylvania Ave., many physicians served as guest speakers, testifying to the horrid conditions people living in migrant camps are forced to endure.

“I barely use the word administration because I’m not exactly sure what it is they’re administering except cruelty,” a physician who quit his job to pursue advocacy work for undocumented immigrants full time said. “These human beings having to be put into this source of trauma in these detention centers is just globally a crime against humanity.”

Physicians, students, and activists passed out stickers, touted handmade posters and hung drawings and baby clothes on a clothesline from migrant children, representing the prison-like conditions they live in and the youngest children (infants) in U.S. Immigration and Customs Enforcement (ICE) custody.

“This group has a really strong presence in our area, and really does its best to reach out to local college students,” Rehmatulla said. “I’m here today because I feel that there’s not enough consistent activist pushback against Trump’s concentration camps, and our voices need to be heard.”

Diego Bolivar, a local community college student with aspirations of becoming a nurse, came out to support the cause at 8 a.m.

“As an immigrant, seeing the way these migrants and asylum seekers are being treated as if they are inhuman is horrifying,” Bolivar said, citing the reason why he is so passionate about this cause. “These people are being held in conditions worse than the United States treats imprisoned criminals. All we can do is continue to stand up for these people without voices.”

Over the past three years, anti-immigrant rhetoric has increased considerably following the election of president Donald Trump. Despite this, positive views on immigration have remained fairly consistent. According to a Gallup poll conducted during the first week of June 2019, 74% of Americans “on the whole” consider immigration to be a good thing for this country. D.C.’s latest pro-immigration protest is evidently reflective of the current mood of the country, and as D4CC and the pro-immigration movement gain traction, the current state of American immigration politics may change.