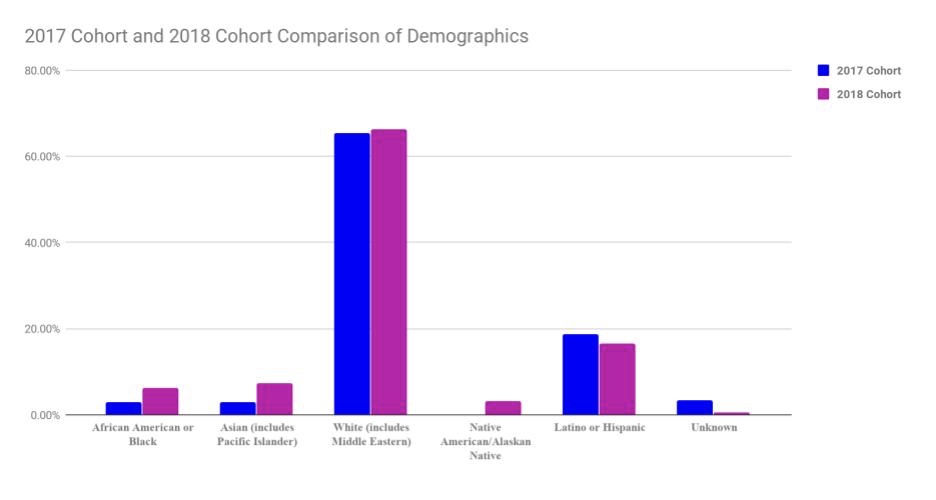 Alexandra Conte/Catalyst A comparison of the demographics of the 2017 and 2018 cohorts.

Overall, these statistics show an increase in the number of students of color on campus this year. While New College remains primarily White, there has been an increase in other ethnicities and racial groups on campus.

Note that the 2017 cohort’s class size is reported in the Fact Book as being a class size of 239, while Hamm reported only 233 students in that cohort. The difference reported is a result of those who dropped out or transferred.

There was no data listed from the 2018 cohort for those who identify as two or more races. According to an email interview with Hamm, Pacific Islander is now listed as part of the Asian group, for reporting purposes. This decision was the result of Hamm speaking to New College’s Institutional Research Office, where it was decided that only “Asian” would be used to classify those who identify as Pacific Islander.

When comparing the 2018 cohort’s demographics and the state of Florida’s demographics as provided by the U.S. Census Bureau, the African American or Black, LatinX and White population are considered underrepresented in contingent to the state population. While the White population of this cohort is lower than the state average of 77.4 percent, this group as a whole still makes up 66.2 percent of the cohort and is therefore not a marginalized group. What is noteworthy is that the representation of the Asian and Alaskan Native or Native American groups is significantly higher than the state’s population demographics.

In order to make the campus better equipped to serve the interest of marginalized students there are two open positions that New College has created to help foster inclusivity on campus.

“There are two positions currently posted that will work with diversity and multicultural affairs,” Robin Williamson, dean of student affairs, said in an email interview in response to questions about the fact that the Director of Inclusion and Diversity position is still vacant. “There is one position called the Executive Director of Outreach, Engagement and Inclusion. That position will report to the President.”

The other open position in student affairs is the Assistant Director for Student Activities and Campus Engagement. This position will “work within the SA[u]CE office and will be available to work with multicultural programs and student organizations,” Williamson said. “I do want to reiterate that even though there may be two staff members who take the lead on diversity and inclusion initiatives, it is on all of us to work towards creating a safe, inclusive and diverse environment.”

New College has a number of resources on campus designed to provide support to marginalized students. Most on-campus resources are run by students. There are currently 12 clubs on campus that provide a safe place for students to celebrate their culture and ask questions.

There is also a bi-monthly Council of Diversity and Inclusion (CDI) meeting in the Gender and Diversity Center (GDC) located in the Hamilton “Ham” Center. The meetings are open to all students, and provide an on-campus space to discuss diversity and how to make New College a more inclusive community. Meetings occur every other Monday from 6 to 7 p.m. The next meeting will occur on Oct. 8. Students can also visit the New College Student Alliance (NCSA) office to talk to the Vice President of Diversity and Inclusion (VPDI), Cabrini Austin, during their office hours. Office hours are announced on the Students List and forum.

“‘Diverse’ is too blanket a category for me to comfortably say NCF is more or less so, but I can say with certainty that there are more Black students now (and throughout my four years) than when I entered my first year,” Miles Iton, director of Sincerely, the Black Kids (a documentary on what it is like to be Black on a primarily White campus), said in an email interview. “It was probably my third year when I noticed the incoming class was more racially diverse than mine was, and I believe the Catalyst touted that year as the most diverse class as well. I believe credit for that should go to efforts from student activism such as the Black Student Union/Black History Month Planning Committee, LatinX Club, the Asian American student alliance on campus, the revamped Council of Diversity and Inclusion from the NCSA and others.”

Iton shared his advice to first-years: “Get your own self-knowledge in check first before running rampant and making ally-ship a part of your identity, because more than half of that list was perpetrated/perpetuated by “well-meaning” students as well.” He emphasized letting “people have their own journeys and know when to play your part.” He clarified that “sometimes that part is listening, sometimes it means standing up and taking action and sometimes it’ll have nothing at all to do with you and that’s just fine.”

Iton’s advice to first-years of color is to have a mentor and “ask for help when you need it.” He warns students not to think that they cannot mess up too, as “anti-Blackness, homophobia and the like are not limited to White people. It’s definitely not your job to be New College’s diversity and inclusion department, but if you want to be loud about changing anything at all (which I hope you do if you have the ability to), it’s gonna take that effort and discomfort to keep that same energy. You’re a student too and you deserve to be where you are no matter how uncomfortable it makes someone else. Claim your space and don’t wait for anyone else to claim it for you.”