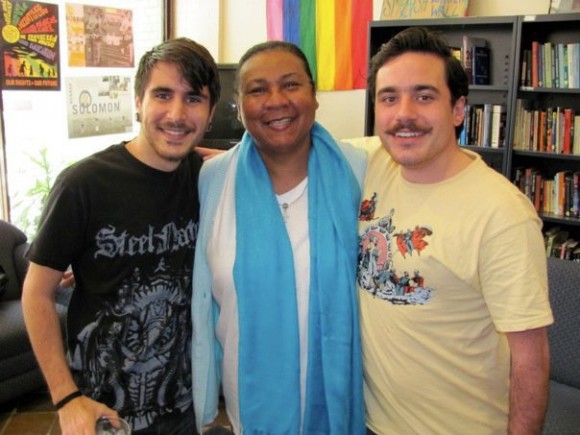 Over the years, bell hooks has established herself as a leading feminist scholar and an accomplished author, and beginning in March of 2011, she will be joining the New College of Florida faculty. hooks, who refuses to capitalize her name so that people will focus more on her work, has written over thirty books, including the award winning  Ain’t I A Woman? Black Women and Feminism, which was named one of the “twenty most influential woman’s books of the last twenty years” by Publisher’s Weekly. She has received many awards and has taught at reputable schools, including Yale, Oberlin, Berea and City College of New York. And, starting in March of 2011, she will join the New College faculty and staff.

bell hooks is no stranger to the New College campus. She has visited twice, once in 1992 and again in March of this year. During her last visit, hooks and President Gordon “Mike” Michalson decided on an arrangement that would allow her to return more often. Every March for the next three years, hooks will be the Visiting Distinguished Scholar on campus, allowing her to visit multiple classes and deliver speeches for both the New College and  Sarasota community. She will also engage in informal meetings and discussions with New College students at the Four Winds.

“ She had a real good time just sitting on the couches with students at the Four Winds last spring,” President Michalson stated. “For her that was the ideal situation.”

Michalson and hooks were originally discussing her teaching an Independent Study Project during the month of January. However, hooks decided that March, which is Women’s History Month, would be best. While hooks contract states that she will visit for the next three years, Michalson is optimistic that this time frame will expand. “My hope is that it will become permanent every March,” he said. “We committed for every March for the next three years, so we’ll try this format this March and see how it goes.”

In order to stay focused on her writing, hooks has decided to visit New College for one month annually as opposed to taking on a permanent position. She will not actually teach a course, but instead will hold discussions with various classes and engage in other informal campus activities. Both Academic Affairs and Michalson are encouraging professors to incorporate her work into their spring classes. That way, once she visits a classroom for discussion, students will have already been exposed to her writing. hooks will be attending gender studies courses as well as courses in various fields. “She’ll go to any class that anybody wants her to,” Michalson said.

In one of her latest novels, Teaching Critical Thinking: Practical Wisdom, hooks discusses classroom dynamics, trust between teachers and students and dealing with race and gender diversity. During her one month visit to New College, hooks intends to further her interest in classroom teaching and pluralism.  She will not only serve as an interesting addition  to New College academics but, she will also help both students and faculty with issues such a diversity and establishing a sense of community on the New College campus.

“She’s very interested in all of those issues, and those issues are a large priority for us right now,” Michalson stated. “Redirecting myself to campus diversity issues is one of my four major goals for this year. Having bell around is like having a consultant on the issues that are most important to us.”

So far, both faculty and students alike have expressed excitement over bell hooks decision to join the New College faculty. “There’s always been strong student interest in having her here,” Michalson said. Earlier this year, many students petitioned to invite hooks to be the commencement speaker for the graduating class of 2006. Although hooks could not attend graduation, President Michalson feels that this is a much better option. “A commencement speech is only twenty minutes long,” President Michalson stated. “Someone who’s been here a month long who you can build a relationship with and who likes hanging out with students at the Four Winds-I think that’s a pretty good arrangement myself.”