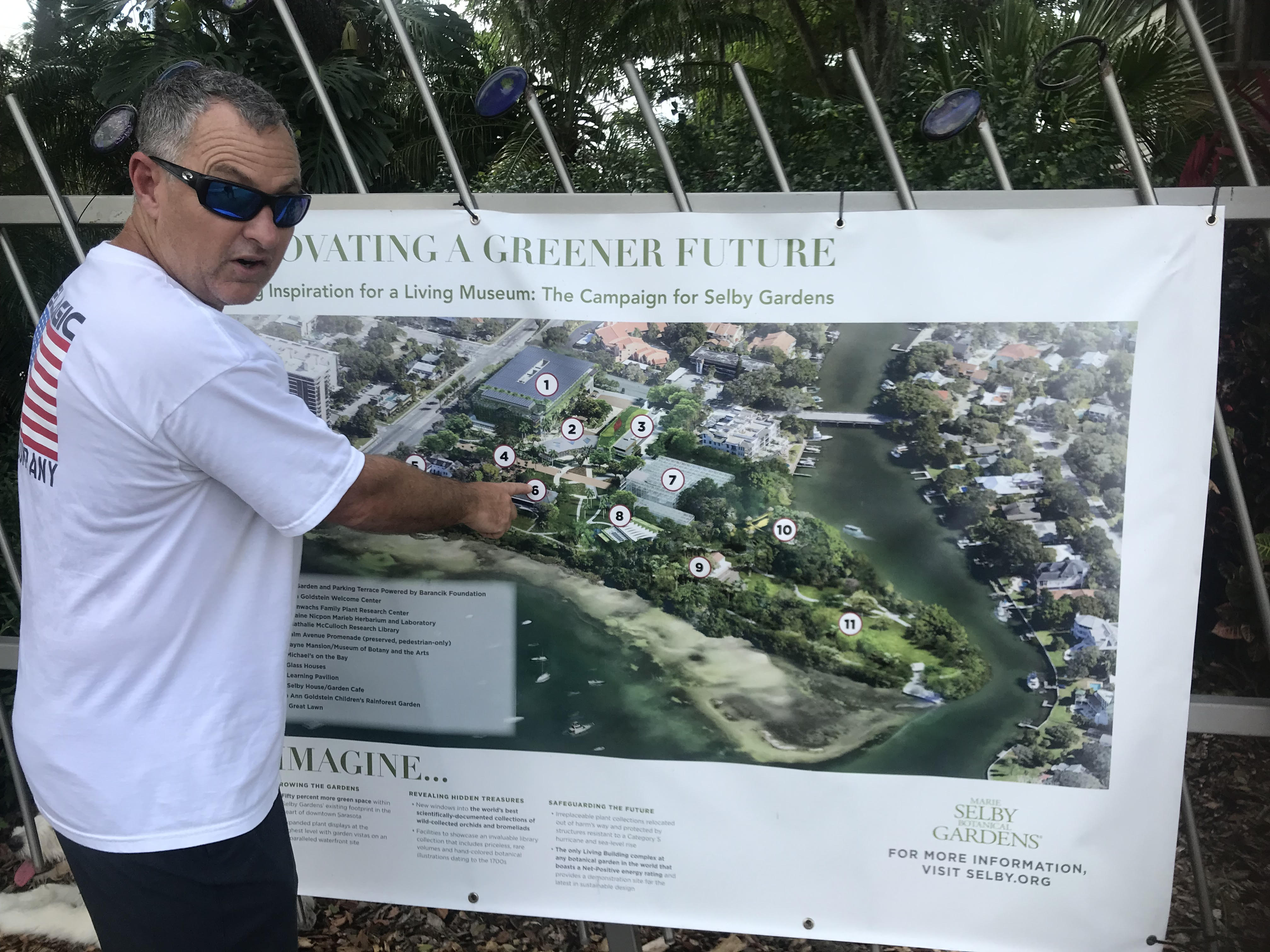 One of the most disputed aspects of the Selby Botanical Gardens’ Master Plan is “the Sky Garden,” or “the parking garage with a restaurant on top of it,” which will be on the corner of US 41 and S. Orange Avenue. The building will be five stories, host to a plant shop, parking garage and a Michaels On East restaurant equipped with an edible garden and solar panels.

The Selby Master Plan was originally proposed to the City in 2017. The Plan has three phases and has a campaign goal of $92 million.

“This thoughtfully-crafted, three-phase plan, made with significant input from the community, is designed to address three key areas: preserve 15 acres of garden and key historic structures along the bayfront; protect the world’s best scientifically-documented collection of orchids and bromeliads by housing them in proper, hurricane-resistant infrastructure; and sustain Selby Gardens’, both environmentally and financially, into the future,” President and CEO of Selby Botanical Gardens, Jennifer Rominiecki, said in an email to The Catalyst.

Phase 1 will cost $42.5 million, and Selby has raised more than $35 million of it already. Phase 1 includes adding a new library, a revamped welcome center, herbarium, plant shop and the “Sky Garden,” which is subject to much controversy.

Phase 2 includes adding an education pavilion and new greenhouses and phase 3 includes building pathways between the gardens and the repair of the Payne Mansion.

“We think this plan is a great balance of protecting our collection, preserving our history and sustaining our future,” Rominiecki said.

Rominiecki is no stranger to flowers. Early in her career, she held a key position at the Solomon R. Guggenheim Museum in New York City, later moving on to The New York Botanical Gardens to become the Vice President for Institutional Advancement and Special Assistant to the President‎. During her time at the New York Botanical Gardens, she oversaw the seven-year plan to raise $479 million in support.

“The Master Plan will bring Selby Gardens’ infrastructure into the 21st century for the next generation of Sarasota citizens and visitors,” Rominiecki said.

A City Program Planning Board meeting was held at City Hall on Wednesday Sept. 18 at 6 p.m. to discuss Selby’s request for changes to the City’s Comprehensive Plan. Selby Gardens has requested to change their land use classification from “Community Office/Institutional” to “Metropolitan/Regional” classification in order to implement the garage and other facilities included in the Master Plan.

Most of the seats in the City Hall hearing room were occupied half an hour before the 6 p.m. meeting commenced. Supporters and critics wore their subsequent jerseys, green for Selby and yellow for Selling Out Selby, a community organization formed in January of 2019 to negotiate the Selby Master Plan. Many Selling Out Selby members live nearby and feel their neighborhood livability is at stake.

“We’ve come together to try to get our message out to the community,” Ty Hall supporter of selling out Selby said. “To be very clear, we are supportive of Selby Gardens, we love Selby Gardens, but we just feel the size and the magnitude of the parking garage with a restaurant on top of it is out of scale for a residential community.”

Selby Gardens is nearby to residential neighborhoods, such as Baypoint Park and Hudson Bayou. Some residents feel the change of Selby’s land use classification to metropolitan/regional could open unwanted doors that Selby could take advantage of.

“What we try to explain is, the City’s Comprehensive Plan basically is the master plan that says what our communities within Sarasota are supposed to look like until 2030,” Hall said. “What’s happening is the city council is working with developers ad hoc modifying the city’s Comprehensive Plan. So why do we have a Comprehensive Plan, if we’re going to constantly change it project by project? This is a seminal project that is intruding on a residential community, and it’s going to set a precedent for Arlington Park and other neighborhoods in the future, when developers want to come in and develop other neighborhoods.”

“The metropolitan/regional land use classification irrefutably characterizes the evolution of Selby Gardens,” Chris Cianfaglione, Landscape Architect at Kimley-Horn said at Wednesday’s meeting. “It has the added benefit of us layering in additional protections. One such is that with the rezone, we are able to specifically list the only allowable uses in the future land use plan. This allows us to provide predictability, as well as enshrine and codify the compatibility aspects that provide greater setbacks and lower intensity of use on site.”