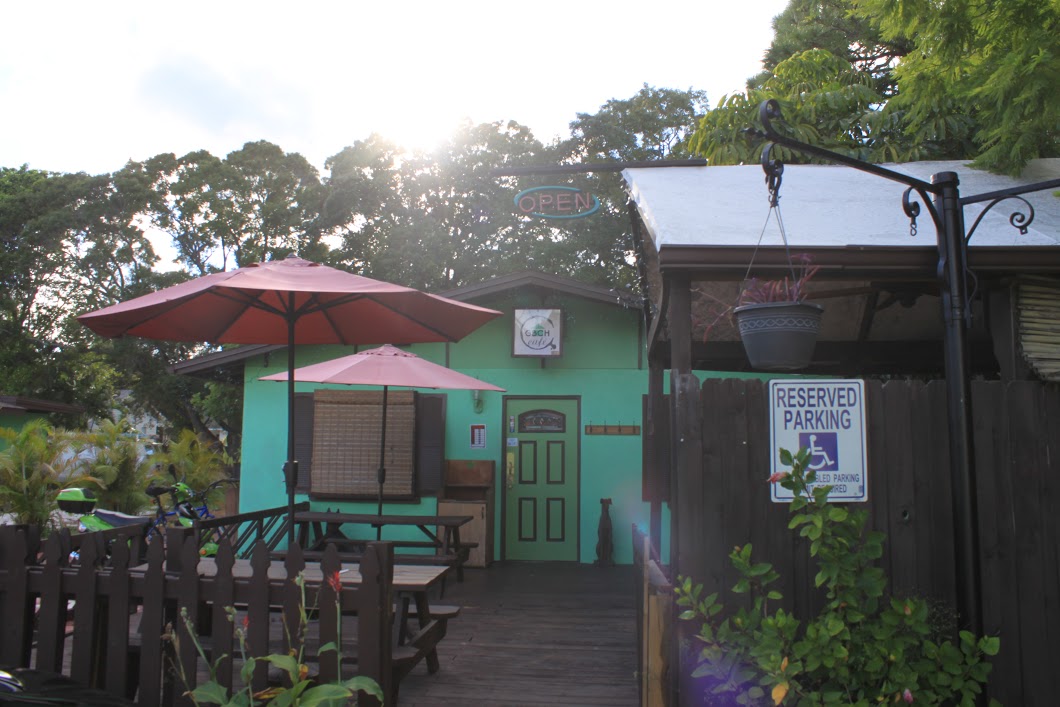 The old saying “If you blink you might miss it,” comes to mind when describing the Green Bean Coffee House. Luckily, a small white trailer advertises out front on the sidewalk of Old Bradenton Road. The coffee house blends in with the residential neighborhood, perhaps partly due to the fact that it used to be an actual house before it became a business.

The coffee shop has retained its homey atmosphere. One feels comfortable there sitting on the couch in the front of the house or meandering outside to look at the half-pipe, a gift from a retired Ringling College of Art and Design teacher. While outside one might spot the pet pig, Mr. Piggers, or a few chickens or Mocha, the dog. The feeling of a friendly neighborhood joint where everyone knows each other is evident when one walks into the Green Bean.

“I started turning my house into a coffee shop about four years ago,” owner Jason Fisher said. He reported that the city of Sarasota is trying to turn Old Bradenton Road into a sort of Burns Court part two.

“The city’s trying to have people open up little businesses along this road,” Fisher said. “Art galleries and whatnot…So hopefully it’s going to turn into a little downtown area at some point.”

The coffee house is the first of these businesses to pop up along Old Bradenton Road. Despite it being the city’s idea, Fisher and Paris Bean, who runs the Green Bean with Fisher, said the city has actually been somewhat of an obstruction to their business and will not let them put up any signs outside of the house. Fisher got away with the trailer out front because it is a registered vehicle.

Because of the signage issue, recognition is depending on word of mouth and Facebook so far.

“Facebook’s been awesome for small businesses. It only costs us $14 to run an ad all week and it gets to thousands and thousands of people,” Fisher said.

“This year’s been really busy…so that’s been awesome,” Bean said. “We weren’t this busy last year.”

The coffee house is home to numerous community events, including a poetry appreciation workshop every Wednesday from 7 p.m. to 11 p.m. and a bigger poetry concert held in the backyard on the stage every other month.

“We like to support everyone in the community,” Bean said. “We cater to skaters, students, families, we really try and cater to everyone.”

With only a mile between the coffee house and Ringling College of Art and Design and roughly three miles to New College, students make up a significant part of the Green Bean’s clientele. Students get a five percent off discount when they come in and an extra five percent if they check in on Facebook.

“What Big E’s used to be for so many is already what I feel in my heart for Green Bean,” thesis student Amy Bernard said. “All I can say is that I can finally go somewhere and feel like I’m spending my money wisely to perpetuate a good establishment, good people and a good atmosphere and I most certainly recommend it.”

The delivery services are also very agreeable to the life of a college student. Fisher and Bean deliver from 8 p.m. to 11 p.m. Monday through Thursday and from 8 p.m. to 2 a.m. Friday and Saturday. One can find their menu at local bars, like Growlers and Memories. The fact that Bean’s cellphone number is also the number one calls for delivery adds to the small town, small business feel. A customer will often get a picture of their food before it’s delivered with a friendly ‘It’s on the way!’ text.

Fisher and Bean have a new marketing plug for their delivery service: a candy-apple green electric scooter. The idea is that if one sees the scooter delivering food around town one can take a picture, post it on Instagram and tag the Green Bean Coffee House. Then the lucky spotter can go into the coffee house and get a free iced coffee.

The Green Bean provides fresh, organic and local food at an affordable price. The menu covers almost everything one could want, including breakfast items, sandwiches, wraps, salads and homemade ice cream. They also have a full coffee menu, including iced and hot coffee and other specialty drinks. Bean handles the kitchen during the day while Fisher says his main job right now is working outside on projects and trying to clean up the mess Hurricane Hermine left. Fisher and Bean are the sole employees of the Green Bean.

Fisher and Bean, both from the Northeast, are living out their dream as small-business owners in Sarasota.

Bean believes the millennial generation is changing Sarasota for the better into a young and up-and-coming town. She and Fisher are excited that the Green Bean Coffee House can be a part of that, as a place for all kinds of people to hang out and enjoy a good cup of coffee.