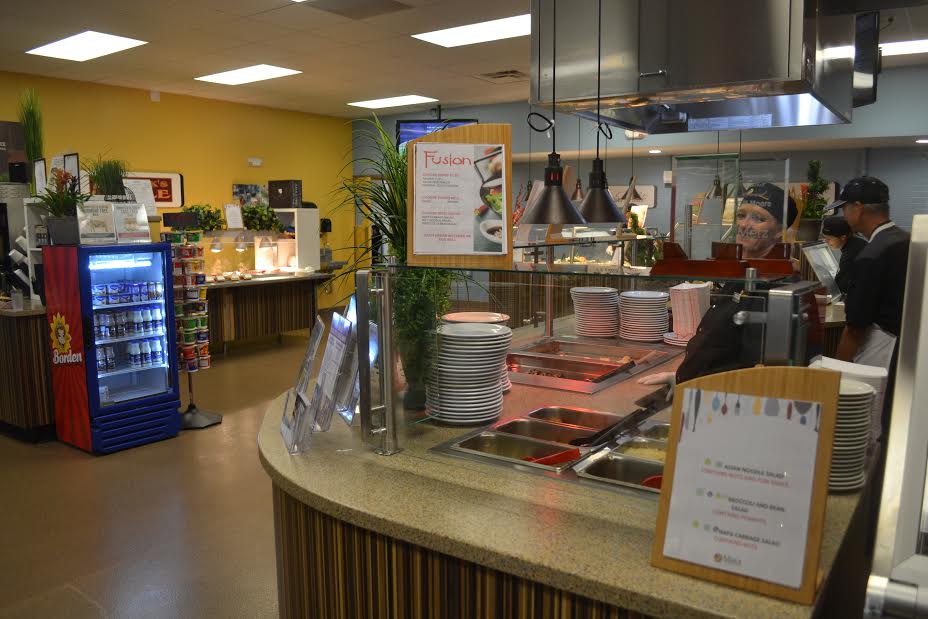 For students who have dietary restrictions, limited on-campus dining options have proved a challenge. With the closure of the Four Winds Café, students who are vegan or who have food allergies or intolerances now have even fewer food options. Concerned students discussed their difficulties with accessibility to diet-compliant foods as well as their hopes for a better dining experience with Metz Culinary Management.

With just one dining hall, New College students are limited to the choices in Hamilton “Ham” Center and Boar’s Head Deli and C-Store. Moreover, as primarily a residential college, as stated on the New College website, “almost all students are required to live in the residence halls and participate in a meal plan.”

“Metz has fairly limited options as it is, let alone when you have dietary restrictions,” third-year Emma Knadle said in an email interview. Knadle is gluten and dairy free, as ascribed to her by her doctor.  “My problem in particular is that I’m not just gluten free or just dairy free. I am both and it is especially hard to find options that can accommodate for those needs simultaneously, most are just one or the other.”

While Metz does offer a salad bar and “Vegan Soup of the Day,” these measures may not adequately cater to the needs of students with dietary restrictions. Further, the lack of variety and concern regarding cross-contamination has caused frustration among students.

“Most of those options that are available tend to stay the same day to day, and sometimes from lunch to dinner,” Knadle said. “An example of this would be the salad bar. The situation is even more dire for those who have allergies, as Metz makes little to no effort to prevent cross-contamination, which is something they openly admit to.”

Cross-contamination can cause upset stomachs and allergic reactions. Unfortunately, Knadle is not alone in her experience with finding unsavory food items in her meals. “I’ve consistently gotten vegan dishes at Ham Center and found meat in them, or cheese,” thesis student Becca Caccavo said in an email interview. Caccavo has been vegan for three years. “The cross-contamination there is real, especially in the Bravo! section, there’s very little care to prevent cross-contamination. Even the pizzas in Boar’s Head with vegan cheese are put on naan made with eggs.”

On the other hand, other students believe that the larger issue lies in the lack of nutritious options for those with dietary restrictions.

“There are plenty of potentially vegan things to eat in Ham, like steamed rice and veggies, Oreos, Nutter Butters and Boar’s Head wraps,” first-year Beau Perkins said in an email interview. Perkins is vegan for ethical reasons. “Some would consider the actual spectrum of vegan food here limited, especially with the downfall of the Four Winds, but I see that issue as secondary.”

Perkins emphasizes the need to offer more nutritious vegan foods. Often, vegans do not acquire the necessary quantities of certain vitamins, such as B12. A deficiency in B12 can lead to serious health problems, such as anemia and blindness. To mitigate vitamin deficiencies, vegans may take dietary supplements.

“Another such nutrient is complete protein,” Perkins added. “It is very possible to get complete proteins as a vegan, but the best source of this is rice and beans. Ham isn’t too keen on getting those in together.”

Consequences of the Four Winds Closure

On Jan. 2, New College Student Alliance (NCSA) Chief of Staff Eleni Spanolios announced the final decision to close the Four Winds Café due to financial issues. This was a blow to students with dietary restrictions in particular, who depended on Four Winds as a dependable source of diet-compliant meals.

“Four Winds is a good space for people who have allergies and/or diet restrictions, as all of their food is vegetarian, and mostly vegan as well,” Knadle said. “There are always dairy free options, and gluten free options also. So, given this, Four Winds being shut down closes off the main source of good food for students who have these dietary restrictions.”

Thus, students must find ways to work around the limitations. “As a thesis student who lives off campus, Four Winds was a really important place to get reliable food on campus,” Caccavo stated. “I’ve found that I’m now just getting snacks at Boar’s Head, and cooking all of my meals at home and bringing them to campus, or just constantly driving to and from school throughout the day to feed myself.”

Knadle stayed on campus this Independent Study Period (ISP) which gave her a taste of what it’d be like with only Ham and Boar’s Head open, as someone who is gluten and dairy free.

“I got tired of the very few options very quickly,” Knadle said.

Fueled by her frustration with the limited options and abrupt Four Winds closure, Knadle reached out to General Manager of Metz Culinary Management Bill Moore to organize a meeting. In late January, Knadle reached out on the Forum to invite students to join her for the meeting with Moore. Unfortunately, Knadle describes this meeting as “rather disappointing,” and only one other student joined her for the discussion.
“Bill himself was not open to what I had to say,” Knadle stated. “Upon my arrival he stated, ‘This is not a discussion.’” Moore showed her Metz’s offerings, such as the “Vegan Soup of the Day,” which on that day was unavailable. The only matters Moore responded to were the potential dairy free labeling and gluten free pizza.

“The dairy free labeling was something that he accommodated,” Knadle said. “He mentioned that he planned to introduce a gluten free pizza crust, which I suggested he could also make dairy free by putting the vegan cheese on it. I’m not sure if this ended up happening though.”

Despite setbacks, students with dietary restrictions remain hopeful and adamant that measures are taken by Metz to improve the dining situation.

“I would love to see Metz do farmers markets so Ham points can be spent on actual vegetables,” Caccavo suggested. “I have heard that Metz is ‘beefing’ up their vegan options though, especially with the addition of gardein meats. I’m a little bit skeptical of that, price and nutrition wise, and as a vegan person would definitely prefer whole food plant-based meals.”

“If you’re a vegan living off of Ham food, you’re not nutritious. I could go on about vitamin A and vitamin D and calcium and calories,” Perkins said. “I would really like to see more care put into this. More vegan nutritional calories, please.”

At the time of publication, Moore was unable to provide comment.

“Metz needs to pull their weight and make more of an effort to accommodate student needs, because that’s what they are,” Knadle said. “They are needs.”