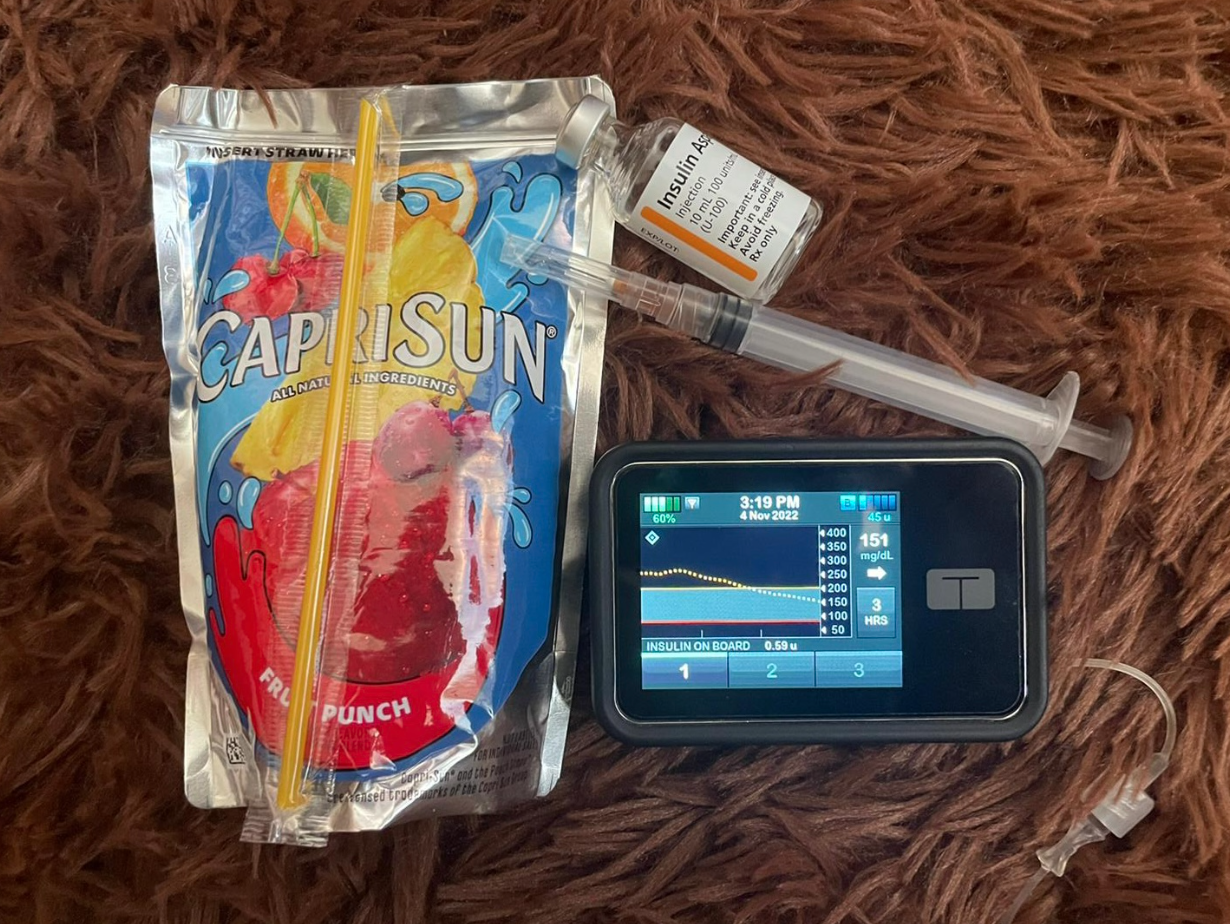 An example of a diabetes survival pack. (Courtesy of Gaby Batista.)

November marks the beginning of Diabetes Awareness Month. In the United States, 37 million people are affected by some form of diabetes, yet 20% of all Americans are unaware they have it. While so many people share the experience of diabetes, everyone feels different about the aspects of their lives that this disease impacts. Not only is it important for people to know the types of ways that diabetes manifests, but to also know the perspectives of students with diabetes at New College of Florida whose lives are affected.

Diabetes is a chronic disease where insulin is not produced by the pancreas and fails to distribute correctly to the necessary parts of the body. The human body’s natural supply of glucose is regulated in the bloodstream; consequently, when a certain amount of insulin does not make it to the bloodstream, the amount of energy that the body needs is not met. Common symptoms of diabetes include excessive hunger and thirst, abnormal weight loss or gain, numb hands and feet, chronic fatigue, dizziness, blurred vision and higher susceptibility to infections.

Catalyst staff writer and second-year Gabriella “Gaby” Batista was diagnosed with diabetes after some blood tests while receiving vaccinations in middle school.

“When it comes to low blood sugar, I get irritable, shaky and I can hardly move sometimes if it’s bad,” Batista stated. “With high blood sugar, I get super thirsty and tired—it’s almost unavoidable sleepiness. Those are the symptoms you typically see online if you simply look up diabetes, but the ‘hidden’ symptoms aren’t really talked about much. On the lighter side of things, it’s mostly interrupted sleep every night, trouble with my pump and clothes and embarrassment in public when my equipment beeps loudly.”

Diabetes exists in several different manifestations, but the most common types are Type 1 diabetes, Type 2 diabetes and gestational diabetes—which have several marked differences. However, all of them share the lack of production of insulin—a hormone produced by beta cells which includes glucose.

Type 1 diabetes is classified as a lifelong autoimmune disorder where the body attacks itself, causing it to stop making insulin. Most often diagnosed at a young age, only 5% to 10% of those with diabetes have Type 1. Those with this form of diabetes must take a form of insulin daily through an injector pen, a needle or syringe, or delivery through a pump which gives insulin under the skin. Often, this form of diabetes can be either caused by genetic or environmental factors.

“The pediatrician checked my fasting blood sugar as a part of a physical exam and it was 136,” Batista recalled. “They had me see an endocrinologist the same day at Joe DiMaggio Hospital; they ran the tests, and I left with insulin pens, glucose monitors and a million doctors appointments.”

“I’ve had other type 1 diabetic friends with much worse diagnosis stories, and it’s the unfortunate truth behind autoimmune diseases, that you might not know until it’s almost too late,” Batista continued.

Type 2 diabetes is a disorder which often takes much longer to develop. The symptoms of Type 2 diabetes can go unnoticed for several years, as the causes of this form are much less obvious. In this form of diabetes, the body misuses insulin by failing to keep normal levels of glucose in the bloodstream. Approximately 90% to 95% of those with diabetes are diagnosed with Type 2, and it is most often diagnosed in adulthood in contrast to childhood diagnoses in Type 1 diabetes patients. Maintaining health with this form of diabetes can be started by creating a well-rounded fitness plan, changing diet and getting in tune with the signs and symptoms of the body with diabetes.

Batista expounded on the dietary aspects of their life with their personal experience with diabetes.

“I eat what I want, I inject however much I need to and I move on with life,” they stated. “There were times where I rationed my insulin or I refrained from eating to not use much insulin, and that’s another horrible reality for diabetics in the United States. One huge change I did make is with what I drink. Juice is strictly my lifesaver because my blood sugar would be crazy high if I indulged otherwise. Diet and zero sugar sodas are also a godsend; I can enjoy it with zero guilt and zero carbs!”

While having diabetes, tracking it is simple for Batista with their equipment which routinely checks their blood sugar levels.

“I have my amazing Dexcom G6,” they said. “A one-inch-by-half-inch gray piece of plastic makes my life exponentially easier. It’s a CGM, or continuous glucose monitor, which checks my blood sugar roughly every five minutes and shares a graph via Bluetooth to my phone, whoever else is connected to the app via their phone and my Tandem pump, which uses a software to change my basal rate according to wherever my blood sugar is.”

As a whole, diabetes is a disease that requires a significant amount of time and effort to mitigate complications with abnormal amounts of blood sugar affecting the body.

“The anxiety surrounding my condition is hard to work through,” Batista explained. ”There’s a lot to fear: short and long term. Physically, mentally, even socially, this disease has taken and given me a lot!”

“During Diabetes Awareness Month, I try to make it a point that despite type 1 diabetes being quite difficult to deal with on so many levels, I’m still capable of quite literally anything—other than surviving on a deserted island maybe,” Batista joked. “There is still so much ignorance surrounding diabetes, what it entails and what it ‘looks’ like.”