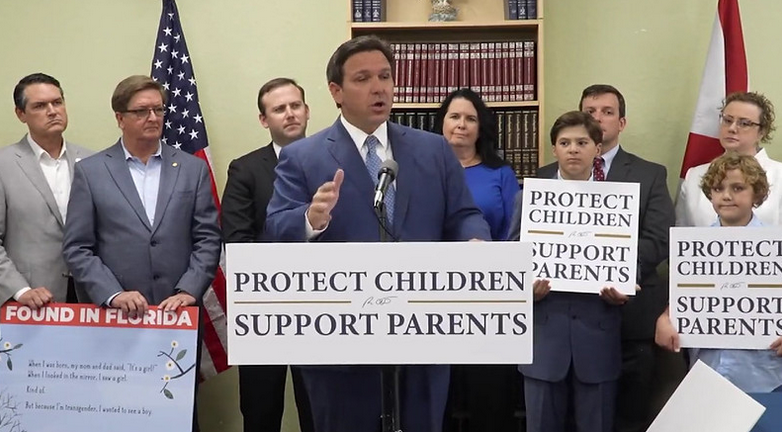 Florida Gov. Ron DeSantis has, in the past few years, gone from an otherwise irrelevant local politician to the golden boy of the far-right. Seemingly a shoe-in for the Republican presidential candidate, DeSantis has been lifted up to the national stage recently, and his most recent political efforts have been the Stop WOKE Act and the Don’t Say Gay bill. What are these bills, really, though? Is DeSantis a flash in the pan, or the heir to the new right? The Catalyst spoke with Professor of Political Science Michael Gorup to figure that out.

The “Stop WOKE Act,” or SB148, is an addendum to existing legislation that addresses unlawful employment practices and state educational standards. DeSantis is using it to “[take] a stand against state-sanctioned racism.” The bill is the Florida legislature’s latest attempt at tackling critical race theory, which they are concerned is going to weasel its way into the American school system from the inside out. The details of the bill are vague and amorphous, and make it illegal to make people feel guilty, anguished, uncomfortable or responsible for ongoing discrimination based on their “race, color, sex or national origin,” which struck Gorup as odd.

“I don’t think I’ve ever told a student they should feel discomfort or anguish, because it seems like a strange way of teaching these things,” Gorup said.

Gorup was confused, if not concerned, by the legislation, which he thinks is written to protect white students from frank conversations about race and racism in America.

“Teaching an honest history of race in the U.S. will make some people feel uncomfortable. Is that illegal?” Gorup asked.

The bill also makes a significant attempt to legislate against what it perceives to be a breakdown of basic virtues. It is now illegal to teach that “such virtues as merit, excellence, hard work, fairness, neutrality, objectivity and racial colorblindness are racist or sexist, or were created by members of a particular race, color, sex or national origin to oppress members of another race, color, sex or national origin.” It’s hard to imagine that a school is teaching kids that working hard is a conception of the white man, but the bill’s overall intent seems, according to Gorup, to attack critical race theory.

“It’s not too surprising,” Gorup laughed, commenting on the seemingly strange and nebulous phrasing of the bill. “[The idea of color blindness originated] in the context of Jim Crow, as a demand of advocates for civil rights.”

Gorup continued to explain that “color blindness” started as an attempt to move past the “separate but equal” laws of the 1950s and 60s, but that soon changed.

“Color blindness is appropriated by the conservative legal movement in the 1970s and 80s to beat back the civil rights movement, especially with affirmative action,” he elaborated. Color blindness as a way to push back against the idea that any minority can receive extra aid to make up for broader systemic issues they faced is “a longstanding feature of conservative legislature and legal thought.”

“It seems like they’ve decided to take that principle and push it further,” Gorup explained. “You can’t teach an honest history of American racism because it might make white people feel guilty or uncomfortable about the privileges they’ve inherited. It seems like the bill is trying to actively prevent criticisms of the strain of right-wing legal thought.”

When asked what the primary motivator of this bill might be, Gorup was confident: “They’re still responding to George Floyd, really. They’re trying to legislate against a broader social trend.”

The Don’t Say Gay bill—otherwise known as House Bill 1557: Parental Rights in Education—is comparatively light, if equally grim, all things considered. It bans the discussion of LGBTQ+ topics in schools for kids from kindergarten to third grade, which got somewhat of an eye roll from Gorup.

“A lot of recent legislation is about empowering families as the unit that has authority over children, as opposed to schools,” he began. “They want to give parents control, or at least input, over the curriculum.”

The bill also empowers the parents of students to sue the school if they find an issue with their curriculum, where those schools that can’t risk losing funding (for many, already on top of the money they lost over mask mandates) are slowly taking down their pride stickers.

It also forces schools to disclose when students look for mental health support, which is an obvious attempt to prevent students from using schools as a way to find support with unsupportive or abusive parents.

As a whole, the legislation tells an interesting story.

“These bills represent the position of the national conservative movement,” Gorup sighed. “They resemble pieces of legislation in every other state.”

It seems that while schools have been the battleground for conservatives for years, they’re amplifying the focus even more.

“We can’t understand origins of the modern conservative movement without understanding the way the conservative legislation movement responded to Brown,” says Gorup. “There’s a history of the American Right focusing exclusively on schools. You look at the Powell memorandum, which essentially said conservatives should fund think tanks, and schools and they should actively recruit conservatives and spread this ideology, and they’ve conceded this ideological ground to the left.”

It’s hard to identify whether or not these are vague and often contradictory attempts by the legislation and DeSantis to work towards broader political goals, or if there is a more malicious, targeted intent here. Recent legislation has passed that allows students to film and record teachers in higher learning to essentially let them “catch” teachers who seem to support these movements they’re legislating against, but at the same time, it was only a year ago that they passed an “anti-shielding” piece of legislation, which, according to Gorup, basically “requires faculty to not withhold any info or teaching materials that makes students uncomfortable.”

There seem to be two different schools of thought that can coexist here, according to Gorup. “Conservatives want to disinvest in public works, especially schools, to strip funding. They’re trying to break school teachers to make them leave public schools and putting pressure on educators.”

The secondary intent, though, is very different. The bills have jumped from making sure there are no safe spaces a year ago to now, which is actively dedicated to creating safe spaces. The legislation seems to support parents’ authority and divest it from the schools but at the same time.

“[Look at] some of the anti-trans legislation in Utah, or Texas. Limiting parents’ ability to pursue gender transitioning for kids, that undermines the parents authority, but it’s okay on that frontier, so long as it’s holding a vision of the patriarchal family,” Gorup argues. “Once you deviate from gender norms, the family runs into all sorts of problems.”

It’s easy to approach this with a sort of fatalism, as Florida and the country seem inclined to swing back to the far right, but Gorup disagrees.

“If you look at the number of bills proposed on these issues, like anti-trans bills, they’re more successful and happening at higher rates nationally, but the representatives are fragmented between two different coalitions: the die-hard Trump coalition and those Republicans that are expecting a return to respectability politics,” Gorup said. “Another example of this was a fight in the Wisconsin legislature, about whether they would pass a bill reversing the states electoral votes from the 2020 election, which they obviously don’t have the power to do.”

“They seem to be targeted at really broad social and cultural trends, that no single policy could actually touch,” Gorup continued, half-laughing. “It’s a sign of a weak coalition. The American Right is weaker now than we think it is. This is the time of monsters—there’s no hegemony, it feels like everything is crazy, and anything can happen.”

The American Right has fractured without a clear heir to Trump (even if Ted Cruz and DeSantis both think otherwise.) Now, the right is pulling in two different directions, and Gorup sees a similar situation unfolding in the Democratic party.

“The crisis of the Biden presidency is that at the start was when he was legislatively ambitious, and now he’s back to the pieties of the mid-90s democratic party,” Gorup said. “A strong foreign policy of first among equals, an expansive and aggressive military. In our veto-ridden system, it’s impossible to get anything done, even with a supermajority.”

“He has national political ambitions, and if you wanna be a leader in political parties, you want to run for president,” he explained. “The only thing that could spoil those plans for 2024 is if Trump is obviously a nominee, and Trump is bad at losing things, so if he loses the nomination it would be a crisis for the party.”

DeSantis wants to be the heir to Trump’s ideology, certainly, but he can’t meaningfully do that if Trump runs again. A split like that could really damage the Republican party, and even as DeSantis does all he can to signal that he’s going to try to run again, Trump seems to be flagging in popularity.